OK its Advent, you can officially start talking about

And I have even started making my Christmas cards. That was helped by me making a card for a Daring Cardmakers Dare last year and saying "hmmm, that'll mass produce" and with a few tweaks it is indeed the card for '09. You can't see it yet as I haven't photographed it and today is too grey and miserable to bother. I am almost half way there though - I'm only doing 60 this year as I overdid last year and am still reusing the cards! But I can show you a few other Christmascards and bits and bobs from this last week.

This Autumn has been particularly busy work wise. That is all good but does mean I seem to be playing catch up or am just plain absent for my crafting responsibilities. Not good. So I am trying to catch them up in a fair way. So, I ahve finally made some cards with the new Funky Hand Festive Fun digital stamps.

They come on an A4 sheet but if you insert it into a Word document you can crop and resize to your hearts content. These are pretty simple but turned out really cute if I may say so! 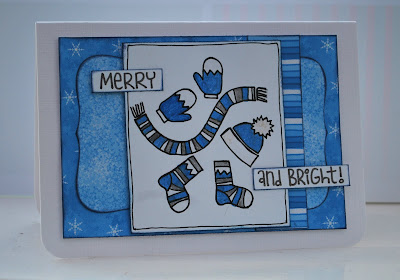 I coloured in the image using Copic glitter pens in colours to match the papers which are from the Blue Christmas Word book. I added even more bling to the papers. Sadly the camera hasn't picked up all the sparkle. The label shape is a Nesties Label 8 cut in half so you can see more of it!

For the second one, if I had been clever I would have printed the tree directly onto the patterned paper which is from the other Christmas word book collection- 'Tis the season. 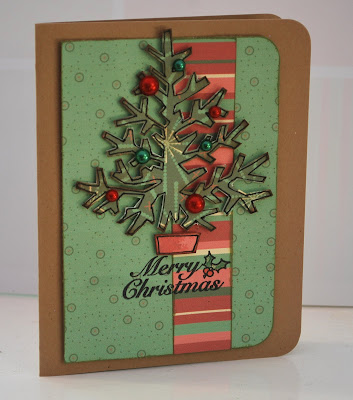 but I wasn't. So I pasted the image to the back of the paper and cut it out and then redrew the image on the front. You may think it was a lot of work. And in fact, it was... I was pleased that I managed to stamp directly onto the paper without a problem (using some free stamps from a mag) hurray! but then realised it was a little too high up. boo. Oh well. A few Prima "ornaments" and I'm done.

I didn't think I'd manage the Salt dare this week. But then a meeting finished early and it came together really fast!
It was a great challenge set by Mona
"And whatever you do, whether in word or deed, do it all in the name of the Lord Jesus Christ, giving thanks to God the Father through Him."
On November 11, Remembrance Day in Canada, this verse was in my devotions and it really spoke to me. Having grandparents who were in the war and having lost a cousin in Afghanistan it really spoke to me - especially as a Mennonite woman who believes in pacifism. Then I thought about it and realized that NO MATTER where we are in our lives nothing is more important than what we do FOR OUR FATHER; nothing else matters. There is nothing more important in my life than knowing that everything I say and do needs to be for the praise and honor of my Lord. I am thankful to my Father every day for the life he has given me and I want everyone to know that all I do is to HIS glory. That is what my life is for - Thank You Father!
I decided to use this photo - one of my favourites from our summer holiday. Carys and I are going up a not very scary rollercoaster at the Weymouth Sea Life Centre (yes, it was Hywel's birthday). I think I will scrap it again when it comes to doing this summers album (still only part way through summer 08) 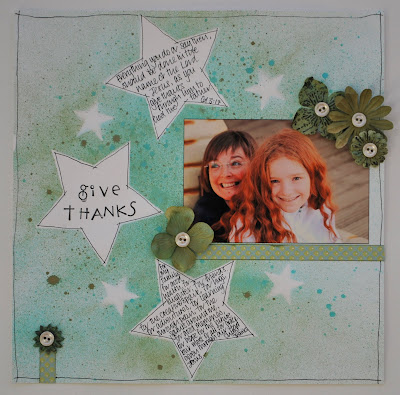 I bought some glimmer mists at the Imagine That birthday bash and so had great fun sptritzing away. The flowers were all white and cream. Emma at the shop had made some beautiful ones overlaying them with script stamps. In order to slavishly copy I will need a proper script stamp and had to improvise with script flower stamps. Some of my tries had to be turned over and are now blank!

I die cut two sizes of star and laid them on the white cardstock and sprayed. Then added black men and journalling and two teeny strips of patterned paper. the alaphabet stamps are from Purple Onion. One of the amazing sets I got with a Self Addressed kit. I like the uneveness of them and even the way I smudged the "g". Just as well really as I couldn't have disguised it.

RIght better get back to those cards....
Posted by Lythan at 9:52 am

What a gorgeous layout and the green really picks out the red in Carys hair. Beautiful.
:)

loving your cards made with the digi stamps and great LO....big hugs kath xxxxx