well... we did it!
Is it possible to sing with our Choir in Germany one evening and attend a seminar in Cambridge the next morning? Just about!
Thursday - 5 am start to get the 7:30am ferry to Calais.
Then a trundle through Belgium, picnic stop at the Netherlands (quite expensive picnic stop when you think of the Pound/Euro rate and the fact we were just at a motorway petrol station. Still the bench we sat on amidst the trees was nice and we were given two free cans of Red Bull).
Thanks to a major motorway crash; roadworks and getting slightly lost due to Ken the Satnav being 30 seconds behind and not as clear as he could be for a while - it took 6 hours not 4 to get to Witten.
But we were there by 4:30. Which was when the rest of the choir were originally due to arrive too. However after we had booked our tickets the choir travel plans changed and they did not arrive until 11:30pm. By which time we had bathed, rested, wandered round Witten, found somewhere where we could eat vegetarian food that didn't cost much having established that the credit card is not used so much in Witten and we already were down on cash thanks to the expensive lunch. Still, we enjoyed a delicious Chinese meal at the Nam King Asia Bistro.

Friday - we had to check out so I had carefully worked out the time I needed to shower, pack, eat breakfast etc and set my phone alarm accordingly. Only I had forgotten to change the time to German time and so woke 40 minutes late. Major panic. But it was all sorted in the end. We had a choir practice and then whiled away the hours at the shops. Where we got out some money. Then some more. Then at a shop that takes credit cards found our card was declined. then remembered just how efficient our Co-op visa is at detecting fraud - things like - small amounts being taken out in a foreign country. So we had to phone and explain and hope we could get petrol on the way home.
Then we took photos. German towns always have fab statues and Witten was no exception. There were lots of middle aged men statues around (don't know why). 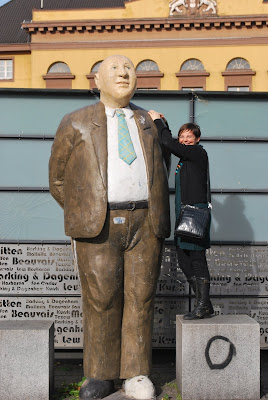 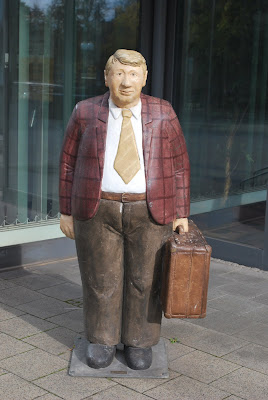 My fave moment came when a slightly tiddly German insisted on being in one of the photos. 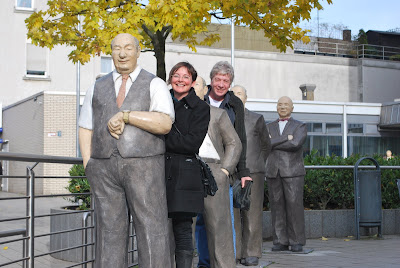 Friday evening - choir concert. German choir, British choir and Russian choir. Russian's were AMAZING. Was it wrong of me to smirk that the totally gorgeous women that our choir men had been drooling over all day had to wear the most unflattering dresses known to humanity (stretch, floor length blue velvet). I suppose it is. We did pretty well though. We sang "The little jazz mass" by Chilcott in the first half and swing type numbers like New York and Cabaret in the second.
At half nine the concert was over. Phil and I grabbed jumpers and a picnic. I settled into the back of the car with sleeping bag and eye mask and we set off for the 4:15 ferry at Calais.

Friday to Saturday
I discovered it is not very comfy in the back of the car. I did kind of doze but didn't sleep. Especially not at the times that Ken was saying those awful words "Turn around where possible". It turned out there was a not very weel signposted diversion through the Dutch countryside. But Phil doesn't panic and got us to Calais in great time. Sadly, just too late to get the boat before. But for a few minutes we were the first car in the queue. Now we both thought that the 4:14 am ferry would be very subdued and we would both be able to sleep.
NOT
A
CHANCE.
50% of those on board were hyper excited teenagers and the rest were just hyper. Most of the boat was cordened off so we were all together and the noise level was truly extraordinary. Funnily enough I did doze off for a while.

Saturday
We arrived home and got into bed at 6:30. I got out again at 7:45 in order to head for Cambridge. my total star of a mother in law, Brenda, who haahd been kid/animal sitting, drove me there. It was more the way home I was concerned about as I had 6 hours of seminar to get through and thought it might finish me off. Phil had found the redbull helpful on the way home so I decided to buy an energy drink to keep me alert during the day. I bought a big one. I was wide awake all day. A small one will do next time. Dear Brenda was tireder than I - having walk around Cambridge for 6 hours!
But hey - we did it! From Witten to Cambridge - job done.

And here is my Daring Card for this week
Halloween theme.
I just went for the colours 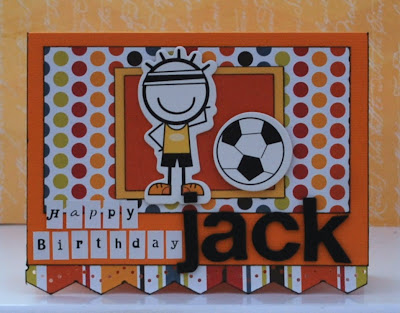 All the papers, the letters and even the cardstock, are american crafts. The little chipboard bits are Docrafts and the letters are MLS. Punch is my fave (and first) Martha Stewart.

I've been plugging away at MA work today. There is sooooo much of it and it doesn't come easy to me - what is hermeneutic phenomenology anyway. In order to do it justice, something else had to give and so I am stepping down from the Funky hand design team. Ack - it is painful. Anice is the best and kindest boss ever. And it may not be forever but at least for a while.
So thanks Anice and all the amazing Funky Handers - its been such fun!

OK its tea time and then I have to write up some guidelines about various research methodologies. Don't you wish it was you doing that?
Posted by Lythan at 5:46 pm

Wow, what an Odyssey! It sounds as though you had fun, in spite of the road journey. And you posted a gorgeous card, too! I am dead impressed!

Wow! You certainly are travelling at the speed of light at the moment Lythan! I'm glad you had such a successful trip. I'm missing you already in the Funky Hand team..but as you say it's hopefully not forever. I wish you all the very best with your MA and everything else in your whirl wind life!
Love and hugs
Anice xx

Quite a timetable, Lythan - glad it all worked out OK. I LOVE those photos!
Great card using the Halloween collours

How did I miss this one Lythan and how on earth did you manage to survive such a trip - well done you! Love the card and the photo's especially the one with the tipsy man! Bet you're glad you've got that one!