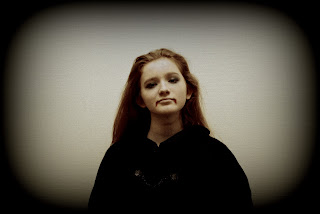 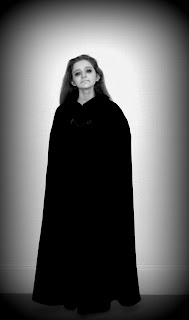 Carys came home last night and said it was fancy dress for Children in Need at College today. After several changes of mind regarding what to wear, once her Dad's funeral cloak was discovered, it had to be "vampire". I was in charge of hair and makeup. She went in on the bus, eager to find out what everyone else was wearing. Most hadn't bothered. I didn't know when I booked her hair appointment yesterday about today - and didn't really think about the fact that I spent ages spraying and backcombing her hair (more post the photos) which the hairdresser then had to spend ages smoothing out. She had her hair straightened after the cut and it looks fab. And she doesn't look a bit like Jac Naylor on Holby. Oh no.

It is looking a bit like that other festival next month as I have to do my cards early this year in order to post out our new address. I've done 57 and hope to finish the lot off this weekend if I can. As ever, i choose a design and then make it in different colourways to stop getting totally bored. I was getting a bit of RSI with the liquid pearls mind. 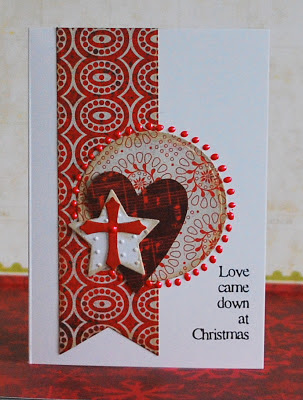 The papers are mostly Basic Grey Aspen Frost, with a little bit of older Basic Grey. And then some pink Crate Paper selections (second card from the right) which are not Christmas themed at all but kind of look festive. I had to send out for more papers as the design took up a lot more than I expected. I did make one or two similar to this a couple of years ago but not as a mass produced card. The card stock is Card Creations smooth white. I've always used their linen effect as I like it but this is fab. Really heavy and - smooth!

This weeks Daring card came as light relief. Gez asked us to make a card "Just because". And here is mine 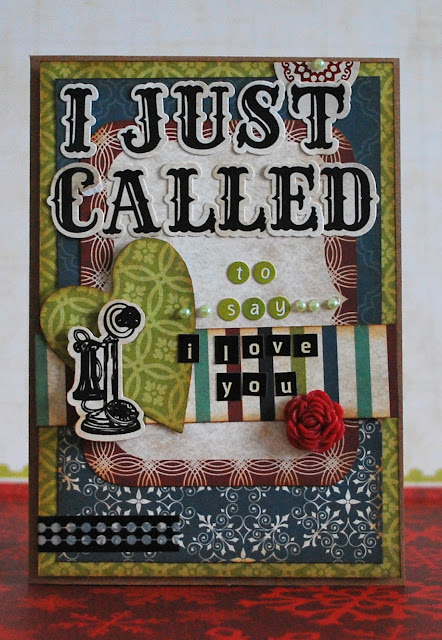 The papers are all Echo Park Times and Seasons. The resin flower is actually more burgundy than it looks and matches the paper on rather than the paper underneath the card although you wouldn't think so would you? I also used some October Afternoon letter stickers and a smidge of washi tape. There were 6 pearls in a row at one point but I have no idea where the last one got too. Still asymmetry is an art form.

I might send the card to one of my sons at Uni (taking off the flower because a) he wouldn't appreciate it b) it would make the post expensive and c) I can then use it on another project and I am sparing with my resin flowers!) but will have to make one equally schmaltzy for the other son.

The Daring Cardmakers blog is looking absolutely spiffing - you can tell everyone is ready for a break from preparing for the old C-word. Or from panicking because they haven't really started. Cards aside, that will be me then. Part of the annual struggle not to let it take over my life and work

Since I came back from holiday life has been as full on as ever and there are only two Sundays left in the Church year. Which means it is nearly Advent - a rather strange time for Christians in that we mix readings all about when Christ will come again and signs and wonders, in with beginning to hold carol services as there isn't time to fit everything in otherwise and we tend to go along with the world and do most of our Christmas celebrating during Advent and not during the season of Christmas which is the 12 days afterwards (you know when my true love gave to me some really unsuitable presents). What we should do is start Advent early so we can have our full four weeks and still have time for all the Christmas jobbings. So why do I only ever remember this fab idea when it is just too late to do it?

Your Christmas design is lovely, just the right balance between CAS and rich and luxurious. And the Daring card is great, I love the old-fashioned telephone so much!!

Love your Christmas cards - and love how you are so organised to mass produce them *takes notes!*

Love your Christmas cards, I'm not surprised you have RSI after all those liquid pearls- you must have had them spread out all over the house to dry too! I think your DCM card is fab too! A brilliant design x