I knew it was a while since I had posted - but 28th July! And so much has happened since then.
That post was a schedhuled one as it came up as I was on my way to Amsterdam.
We only got as far as Exeter Airport....
First the plane was delayed for 5 hours, then it was cancelled all together due to torrential rain in Amsterdam (where the plane should have been flying in from). The next possible flight was Thursday - the day we were due to come home.
I will not lie, I had a bit of a wibble.
But: we had booked our trip with Travel Counsellors who were awesome. We know Claire Bottone personally (she is rather lovely!) so went through her but she was actually on holiday when disaster struck. No worries though as by the time we arrived back home our WHOLE holiday had been refunded thanks to the work of her colleague. We could have rebooked Amsterdam or gone somewhere else abroad with their help but it just seemed like too much for my head to deal with. Getting home was interesting as Phil had gone on to see his mum in Hampshire after dropping us off so we had to get taxis and trains. Not so bad except I didn't have much British cash and the only credit/debit card I had with me thought I was abroad and I didn't want to use it and get it swallowed. I had 50p left by the time I got in the house!

By that evening (partly buoyed up with the refund and not having to use travel insurance and at Phil's insistance) I had booked up for us to travel to London by train next day for three nights in a hotel right in the heart of South Kensington. We had a fabulous time - we tried to do all the same things we would have done in Amsterdam, like a canal trip, museums and looking at Van Gogh painting but we were able to throw in shopping at Camden Market and going to see two shows (The Commitments and The Curious Incident of the Dog in the Night time - both awesome) which was a bonus.
Fortunately I had only pre-booked one trip in Amsterdam (I was going to do more but then decided to get an I Amsterdam card when we were there) - a tour of Anne Frank's House. I thought I would email to let them know we wouldn't be there for the English tour so they would not be waiting for us and they offered a full refund as well! (One more dress for me from Camden then)
We had a great time and the weather was gorgeous 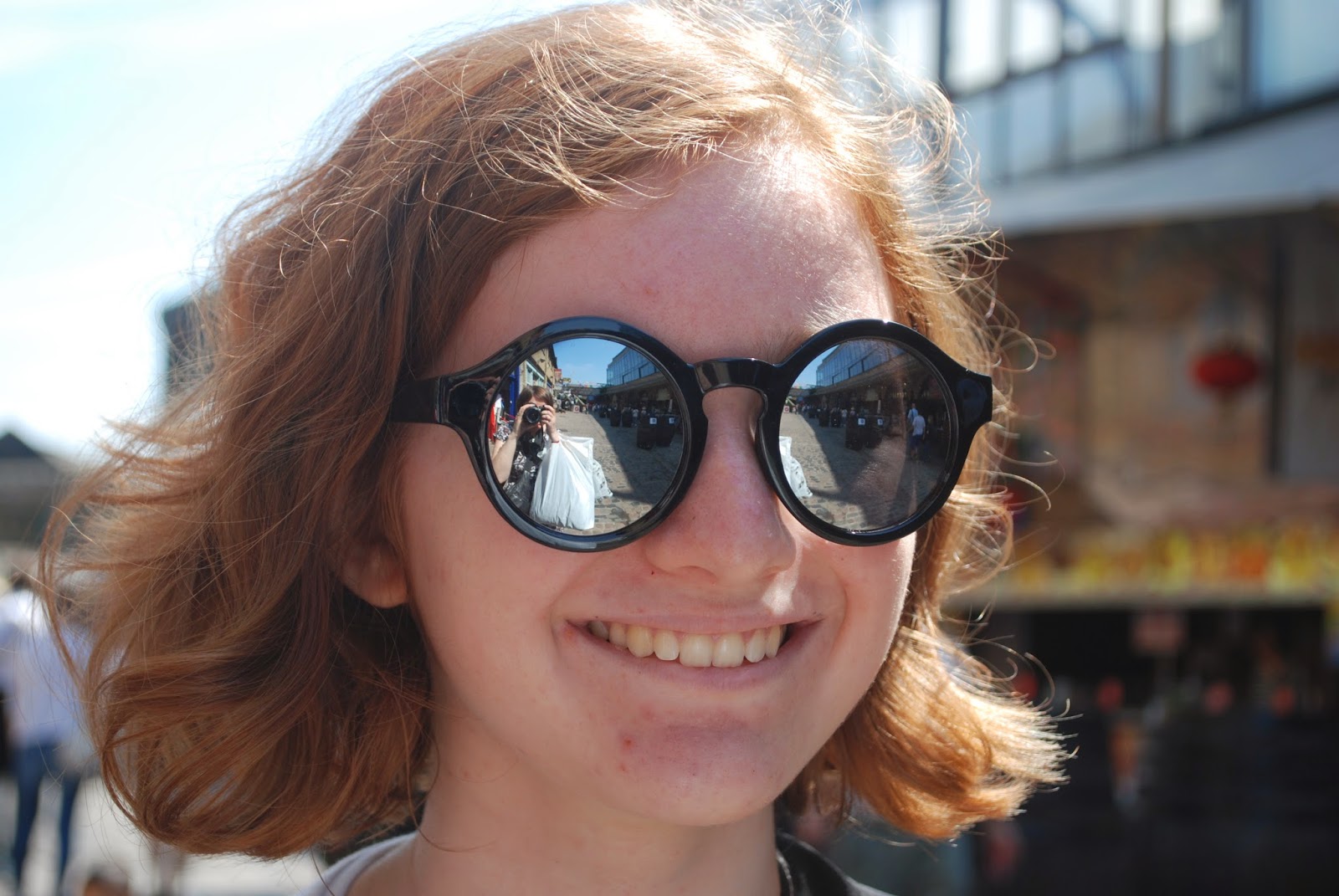 I've also been away on a kind of retreat to the Society of Mary and Martha in Sheldon. They love to look after bruised and battered Ministers - and I am always happy to be looked after :)

This week I am at home catching up and waiting for A level results (Carys has a place at Bradford her first choice), but have two more trips before I go back to work.

Here is some of the scrapping that I have been doing. I am only just finishing layouts about Holy Island so have ooooooodles more to do this year! 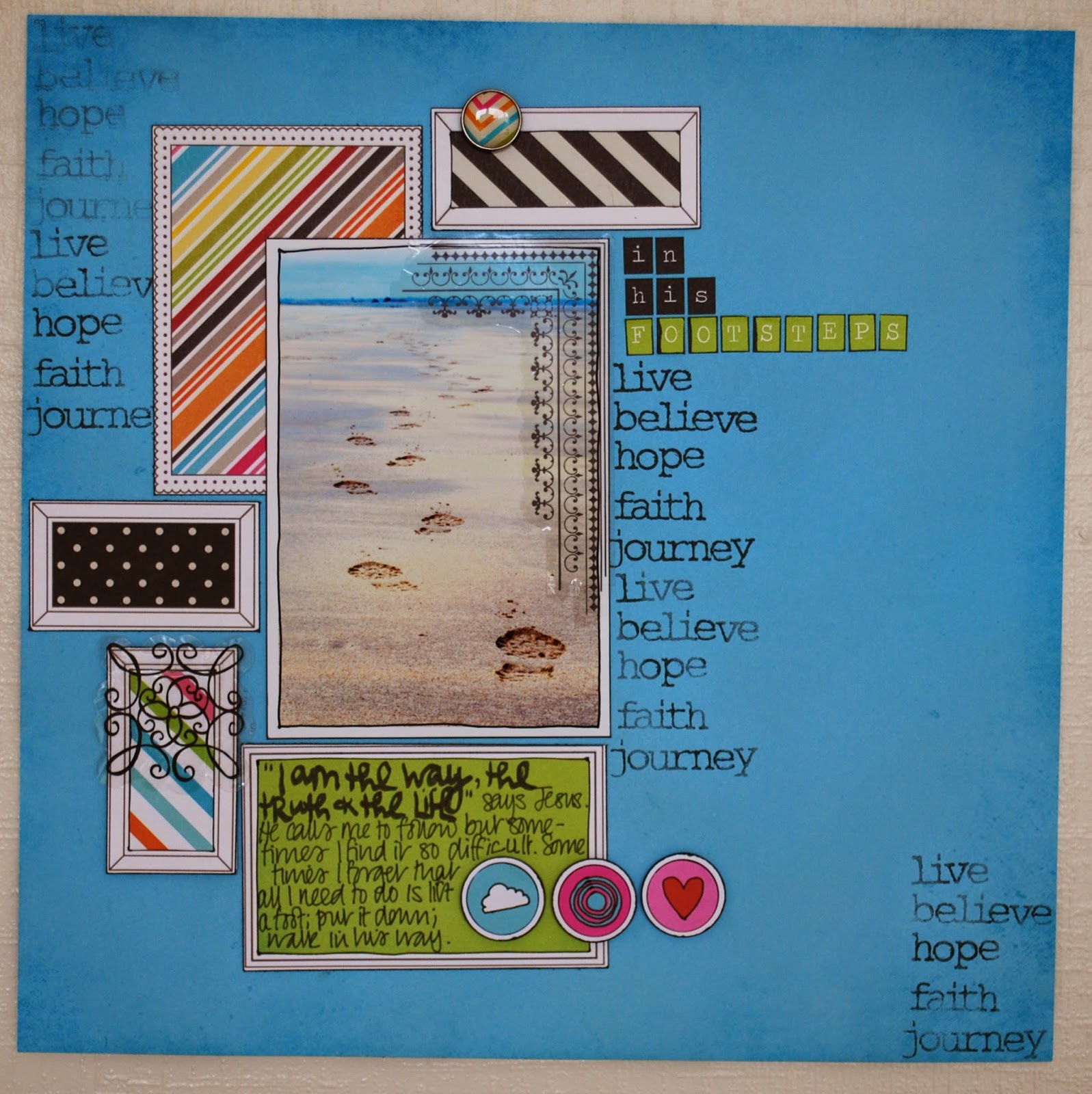 I bought these fabulous Maya Road Art Journalling stamps which have lots of words that are great for faith scrappers! The papers and embellishments are all Simple Stories apart from the black/clear stickers which are American Crafts from about 8 years ago. 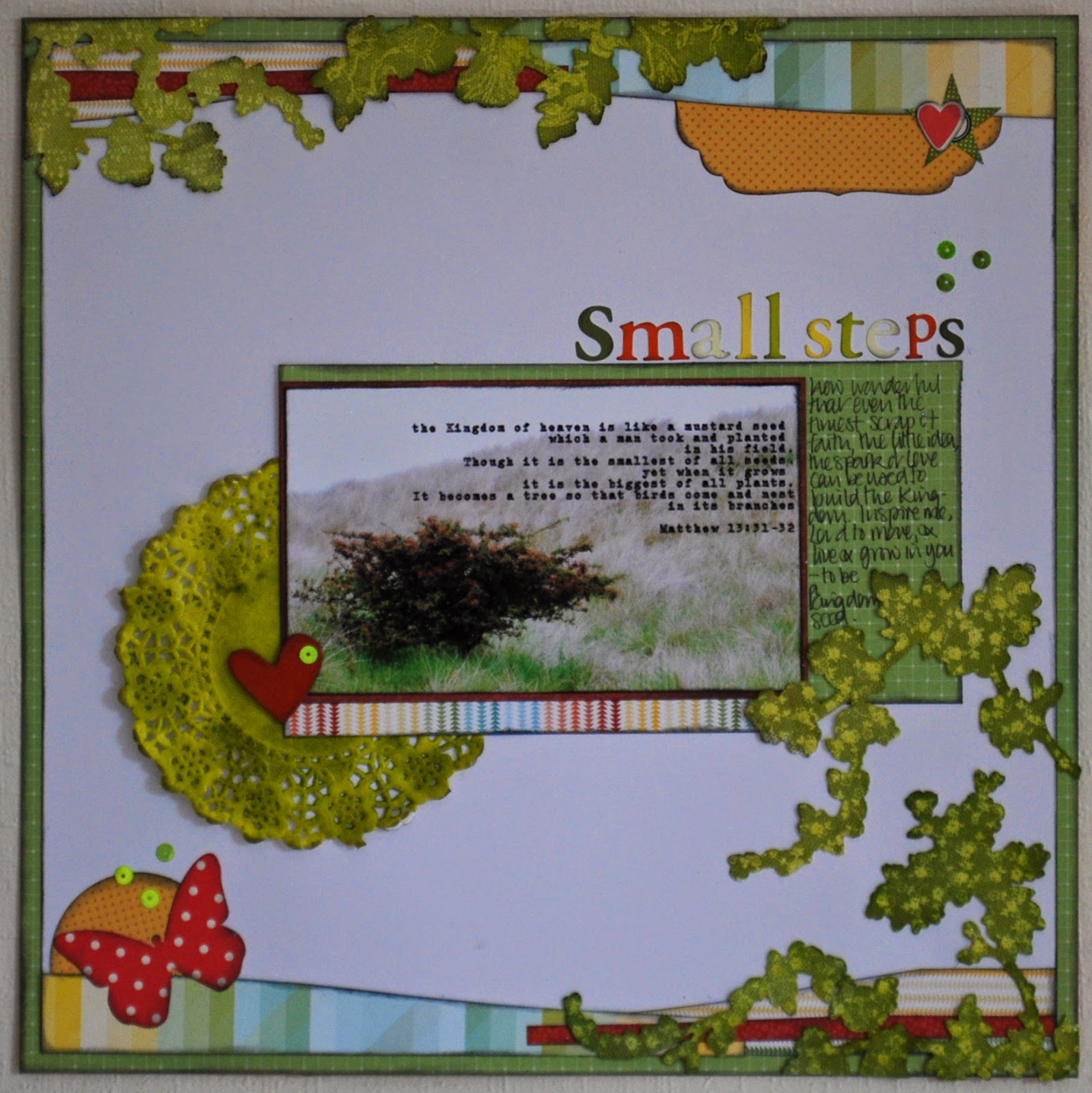 This layout was made using Studio Calico papers in the main (and a few scraps from the pile). I wrote on the photo using Picasa before printing it. The letter stickers are ancient American Crafts. The green things are Pink Paislee calico type embellisments that you can ink or spray. I painted them using various mists which I also sprayed onto the doily. 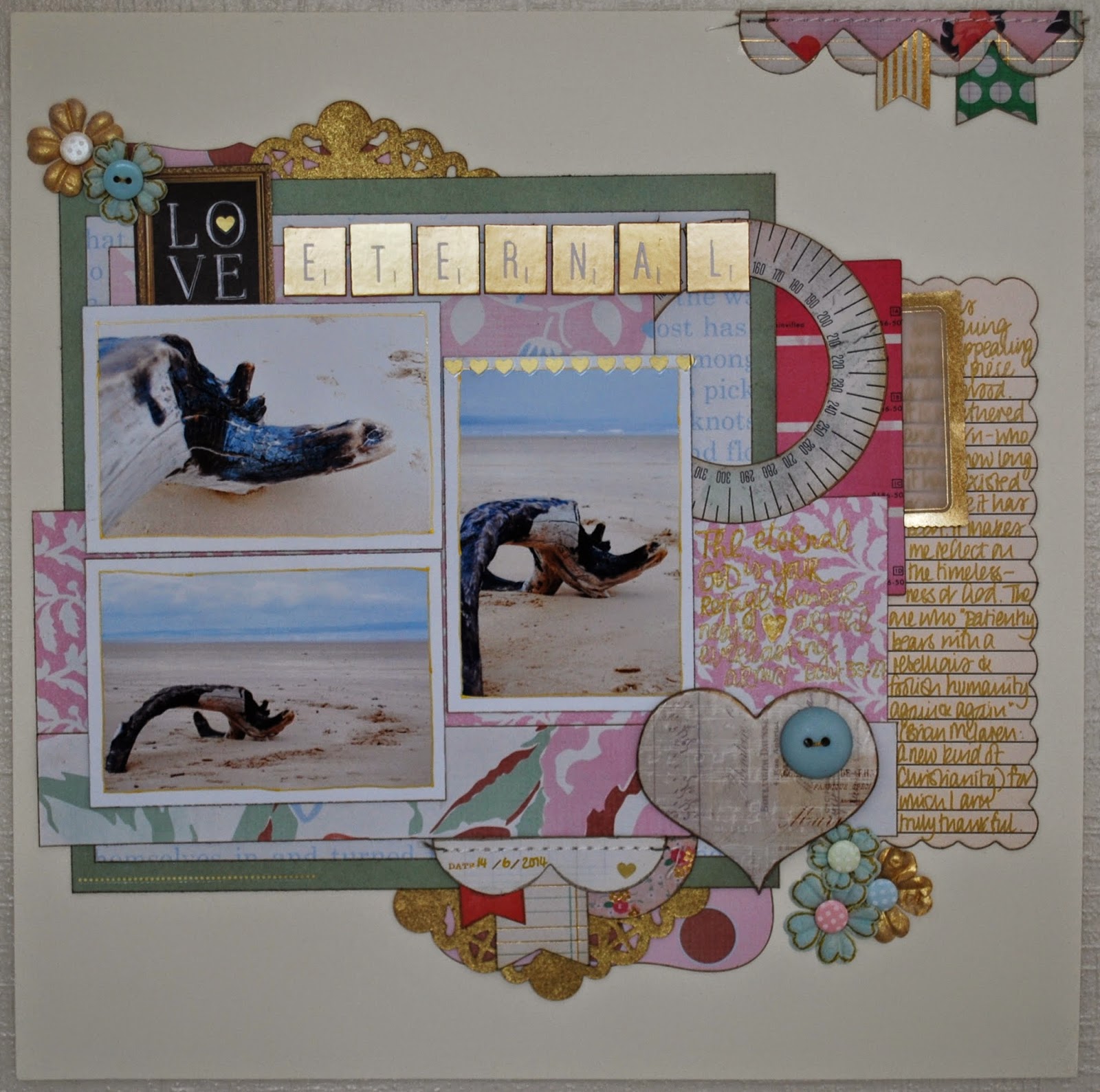 I'm trying hard to use some of my really old stuff along with the new. This has Jenni Bowlin papers from 5-6 years ago. Very pretty but very thin, mixed in with some newish Crate Paper Maggie Holmes embellishments/rub ons and some paper flowers given a new look with gold spray (as was the doily). The gold writing is much easier to read in real life 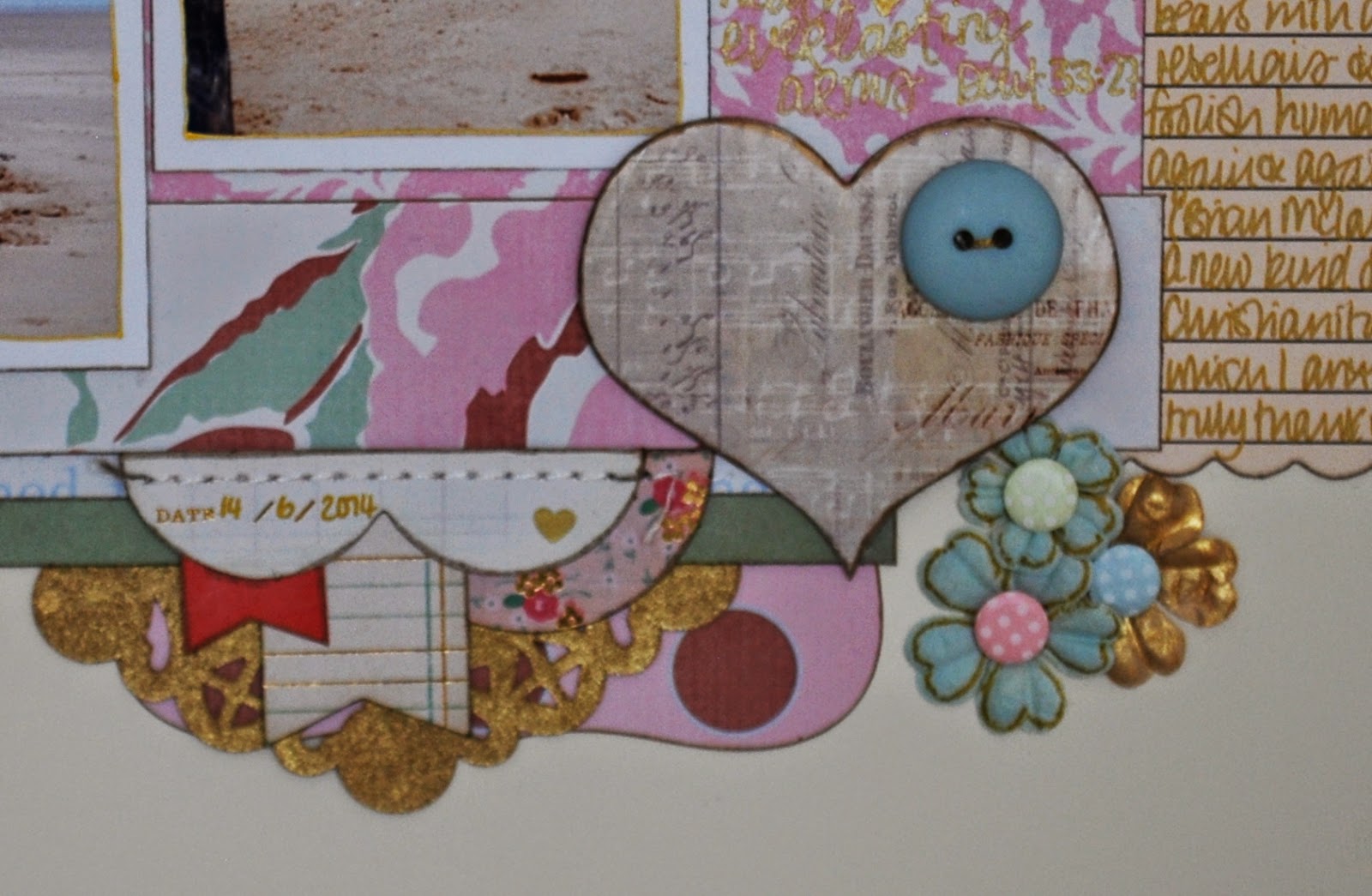 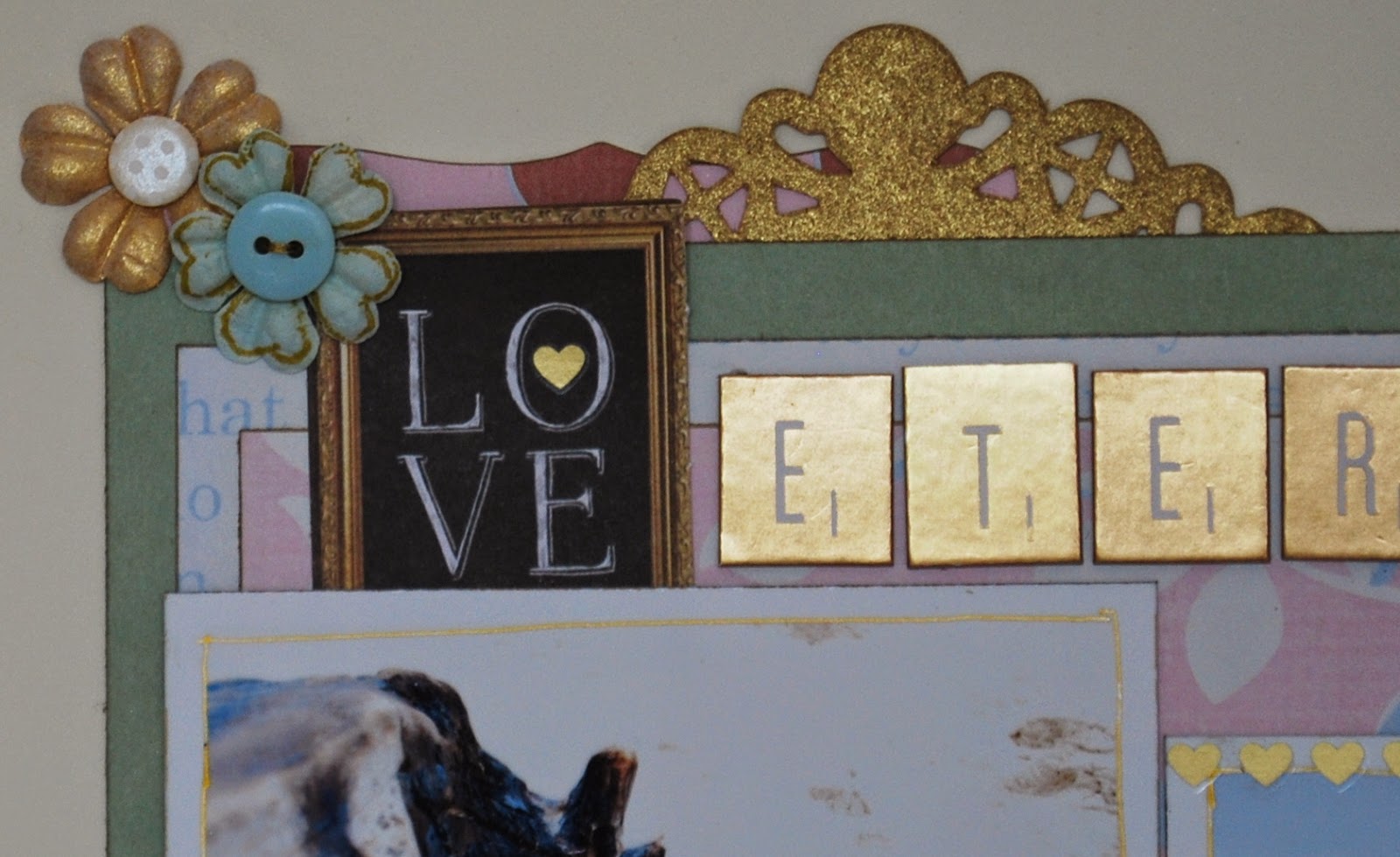 I'll be back soon with some Daring Cards!
Posted by Lythan at 11:01 am

Sounds like you've had a very busy Summer, Lythan.

Love the LO's. We can always rely on your bright and colourful pages.