Boy once you have stopped it is really hard to get started again!
But I don't want to give this up completely so let's see if I can do better at blogging in 2016. (That number sounds so science fictiony to me. Like it should be a time when we all live on the moon and have computers inside our head. Instead it is the NOW)

December just got a bit - much. A lot of work plus a week of that was away from the house which was probably not the best of ideas as catching up was extreme.
It meant that I even forgot to participate in my own challenge on Daring Cardmakers. I was checking my Facebook feed in a meeting break and let out this gurgling screamy noise. "What's wrong" asked my friend in a panicked voice. "I forgot my own Daaaaaare" I replied. My non crafting colleague was a bit non plussed.

And I have only just added the cards that I later made to the dare itself, that is how December was....
The dare was called Joyeux Noel, the idea being that you make a card in a different language to your own. I tried to make up for my foolishness by making two. But as they were only posted in January I don't think that works really. 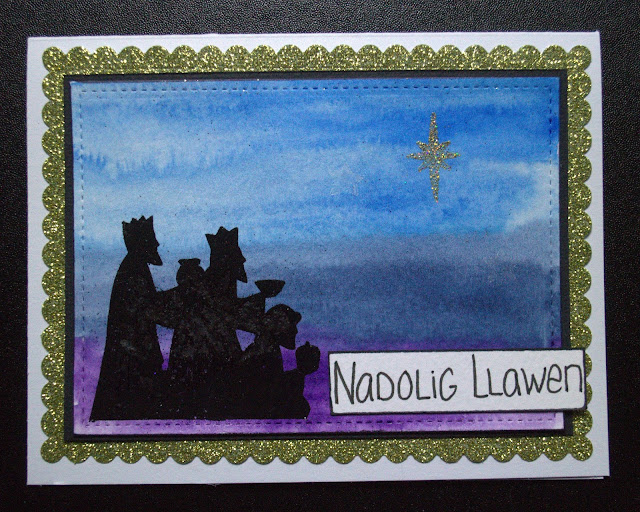 I know the language but I don't speak it myself so I am allowing this one!
The Kings and star are from Paper Smooches. I used watercolours on watercolour paper to do the background. The star was heat embossed with gold glitter powder. I cut out the frame and various other layers using different rectangle dies - the last layer being some nice gold glitter paper from Craft Creations. Strangely enough I don't have a Welsh sentiment and felt that any stamped letters might be too big so went for hand written instead.

then there is this 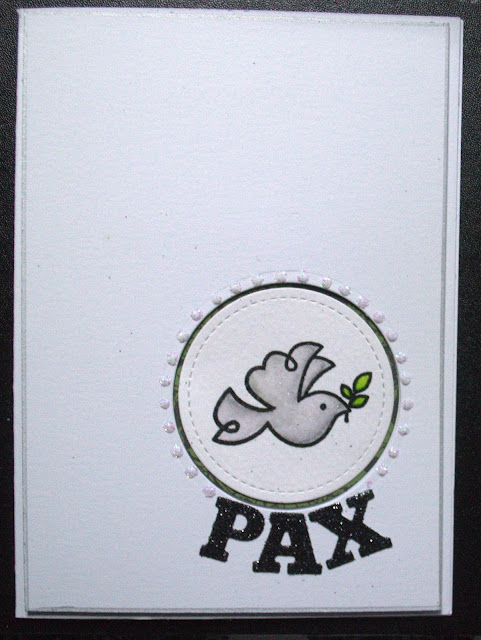 It uses the dove from the same set. I die cut a circle out of a piece of cardstock and lined the edge with silver krlon pen. I cut a slightly smaller circle from more cardstock and embossed the dove, colouring her in with Kuretake watercolour pens. I cut another circle from some green patterned paper and stuck the two together, then they were adhered to the base card. I added the first piece of cardstock to the top with foam pads. Finally I die cut letters from black glitter card and dotted snowflake stickles around the circle.

Christmas was good - busy in a working way (and it seemed to knock the stuffing out of me). Number 1 son was in Florida with his partner which was strange. But it meant that making room for my parents to stay was easier. 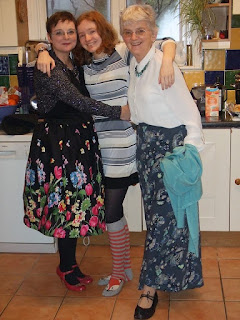 3 generations on Christmas Day. I love my new skirt (and it has pockets which is even better) 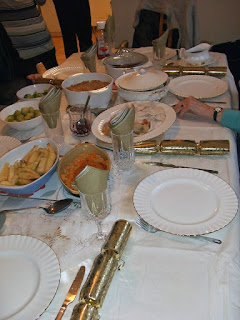 Dinnner was served - slightly late as there were only 2 meat eaters so we bought a turkey crown - but that only needed 2 hours in the oven and so had to wait until we were all back from church. Emrys was going to have quorn roast as he doesn't like the veggie option (parsnip and cashew nut roast) but that missed going into the oven and takes an hour. oops.

However not as big an oops as me realising on Christmas Day that I had only bought and wrapped one of Carys' presents in my head. And we were only getting her two presents (we are working on reducing our materialism here). Oh the shame. But she was lovely about it and the 1 hoodie has turned into 2 which she has chosen so it is all ok. I blame having to wrap most things before H went away  - which was while I was at a conference so all had to be done by 6th December and then I just assumed.... I will try harder next year!

We went on the traditional boxing day walk. Teignmouth this year (Em is not in the photo) 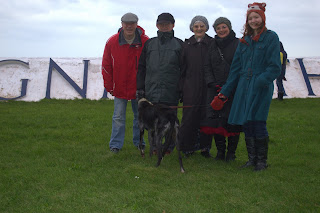 We are standing in front of the Devon version of the Hollywood sign - much easier to get to...

And finally I haven't mentioned my new crafting discovery - crochet.
I fell in love with other people's work on Sophie's Universe but didn't think I would ever be able to crochet. I can knit but have to anchor the needles in a way that made me think I couldn't do the looser one hook thing. But then I went to a local craft show with a crochet enthusiast and found myself buying a book and some wool and she lent me a hook and although it was VERY hard to master in the beginning... by Christmas I had finished this blanket which was given to my Aunt Joan who lives in a home and often has cold knees! 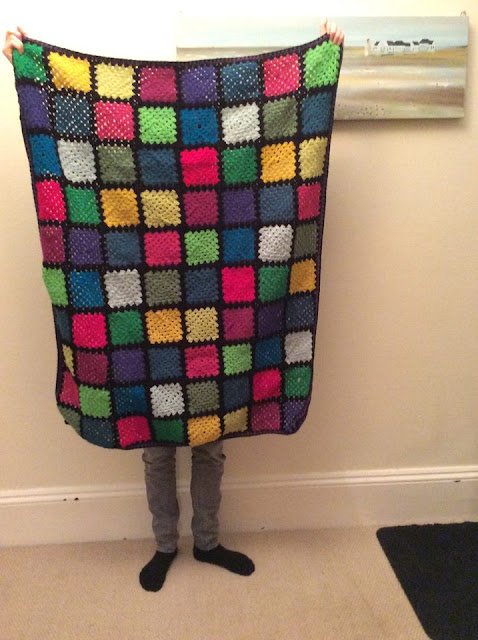 You may note that, like most of my crafting projects, this features a lot of black in the outlining! (thank you to Carys for modelling it - kind of lets you know the size) I used the Stylecraft new colours pack and added in an extra pink and blue.
I took wool with me to Madeira and made squares there but when I got back found they were all a totally different tension/size and had to redo them all!

But look at the edge (proud) 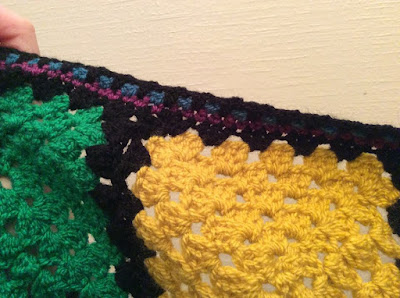 this is the edging on the Attic 24 Sunny Granny Stripe blanket that I am now making for Carys but decided to have a practice go on my first blanket.
I had to do and redo the first 3 rows at least 6 times (and even now the starting row is probably a tad too tight) but now it is growing fast - it is simple but fun to do with lots of lovely bright colours. Its much better for me to do than cross stitch in the winter as I can do it in less than bright light (and read at the same time!) but I hope to do more on the grand cross stitch in the summer (still another 10 years in it to complete it I reckon)


Right going to stop here and do another post with some layouts on so that I will do at least two posts in 2016....

What an amazing blanket for a first go at crochet. It sounds like you had a wonderful Christmas and I look forward to seeing more of your crafting - Happy New Year.