It was a lost weekend

I had a lovely day off last week, mooching about and crafting followed up by a delicious tea and movie night (the Hateful 8). It went downhill from there and I spent most of the night in the bathroom... for a while I thought it was my cooking but it turns out there is a bug going round here. I was able to be back in action for the most part on Monday but it as taken until today (Friday) to feel properly better. Apart from the low level cold I have had for a few weeks now. I think that moving to a new place and spending most of my time with children means that I will pick up every bug going. Sigh.

Anyway that means that I have two cards to talk about this week
Last weeks DCM dare theme was "I want more" where we had to decide what we want more of. Hmmm hard to choose so I went for
more hand lettering 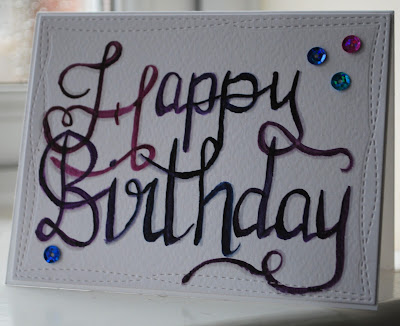 so I went for bravely trying to paint letters.
I find it really, really hard to tell if this is nice or not. I look at my writing and all I see are the things that are not perfect and it I am totally honest, the ways in which it is not like Kristina Werner's hand lettering!
There is a real difference between me and Kristina though and that is that she has spent a lot of time working on her letters and I just want to be like her straight away. To me that is a lot like discipleship. It is no good comparing yourself to others especially if you are standing there moaning rather than putting in the time practising. Christians are called to be the best we can be - using our own individual gifts not looking with longing at others.
hear endeth the sermon...
so I do want to commit to working on this a bit more and have started adding lettering into my bible reflective journal that happens a few times a week (should be almost daily but I'm being honest here!) 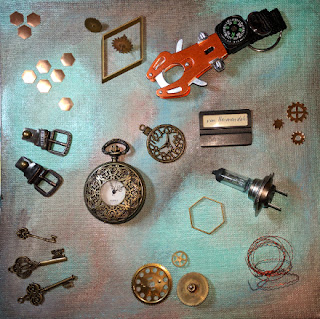 I could have sworn that in my stash I had loads of these bits and bobs from when steampunk was all the rage. Not so much, it turns out. I also wondered what card to make as I think I did a "key to my heart" last Valentines day, if not then, the year before (what do you mean he won't remember!). So I turned out my whole craft space and came up with... 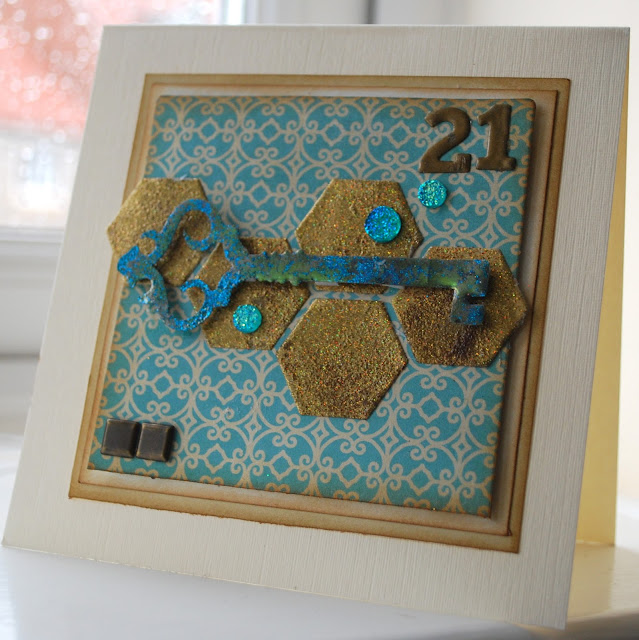 The blue filigree backround (inspiration 1) is a booklet type thing left over from a Quirky Kit that I trimmed down. The key (inspiration 2) is made from a thin chipboard one covered with Versamark ink and peacock blue UTEE. When it was melted  mint green UTEE was sprinkled randomly on the top. The gold hexagons (inspiration 3)are dies covered with old gold and then tinsel gold embossing powder, plus a little bit of Vintage Photo distress powder that you heat on and rub off to age it. The letters are die cut cardstock covered in old gold embossing powder. The combination of rough embossing and UTEE covered die cut meant the two surfaces did not want to meet up, not even with extra strong glue but finally foam pads and the threat of going in the bin did the trick. 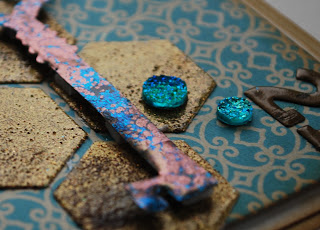 (it looks bronze there but really is green)
I was sure I had some nailhead brads to be inspiration 4 but these little metal square ones were the best I could do. I cut and inked some paper layers at the bottom as it all looked a bit too stark against the large square card base. Lastly in my throwing everything about I found these lovely Prima jewel like stick on gems that are the exact same colour as the key is now so they went on. Now who to give the card to? Would it suit Carys as she is (gulp) 21 in a few months time?

In other crafting news I have finished the blanket I made for my Goddaughter. She was 18 last birthday and is heading for Uni so I thought something to snuggle under in a cold student room might be the thing. I only decided that after her birthday so it is a bit late! I used the Attic 24 Cosy Stripe Cupcake kit
which was nice as someone else had done all the work of putting together the colours and I could just crochet 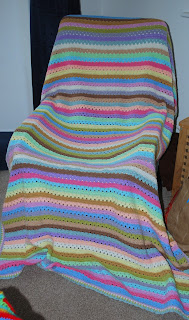 Its a largish single I would say. The edging is beautiful 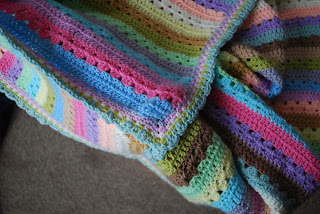 This is my second cosy stripe. The first was a rainbow baby blanket. I like bright colours and hoped the parents would too 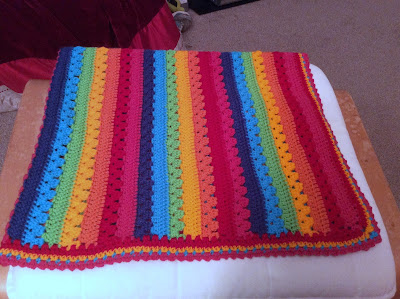 I've seen the baby wrapped in it and she looks lovely. (though I say so myself!)

So now I have two projects on the go, both by Sue Pinner and I will have to hope I don't get confuddled. One is the Secret Blanket which is a small lap blanket that uses up all the leftovers from the Carousel. Its a bit scary in that I have to choose my own colourways. I mean Sue chose all the colours initially but I wanted to try and put them together well too. Here are my first two large pieces 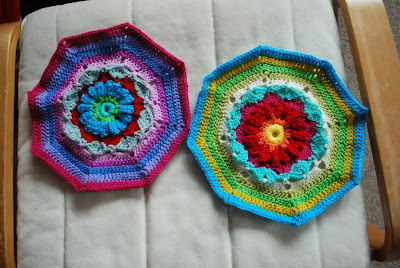 Every one will have red in as that is the accent colour in my front room and anyway red goes with everything in my opinion.
I've just got the wool for the other one which is made in pieces in a similar way but using aran wool. Two of the colours should have been in a different more expensive wool so I swapped them out and hope it will still work well.

Both your cards look fab, Lythan. I'd really like to be able to do handlettering like this! (But then again, I know exactly what you mean about looking at anything that's NOT quite perfect... sigh)
And the key-card is a dream! Love all the structure and different layers that you've built. And of course the colours.

Hope you're feeling properly better now. Your hand lettering looks a darn sight better than mine, I can tell you! You're right that it takes practise to be up there with the pros but a good base to start from is a valuable thing and I'd say you have that. Your 21st card is a lovely combination of elements with great textures and the crocheted blankets look fab!

WOW, stunning. The key is gorgeous. Lovely to see your other creations. You are a very busy bee. x

Oh Wow! what a wonderful set of things to see. I don't know where to start with the praise! So I'm just going to say that everything you have shown here is special and beautiful and much admired.
Honestly Lythan, you are just too hard on yourself - you have no idea how envious of your pen skills the rest of us are, do you?

I do hope that by now you are feeling ticketty boo again - and yes, if you are working more with the Little 'Uns, prepare yourself for being bombarded by every bug going!