It was Gillian's turn to set the dare this week...

Make a card and include some felt,
the theme & style are entirely up to you,
My first thought was "help" as I don't usually use felt. Then I began to notice it cropping up everywhere and I have ended up with 3 felty cards, plus loads of cut out pieces that I haven't used yet. 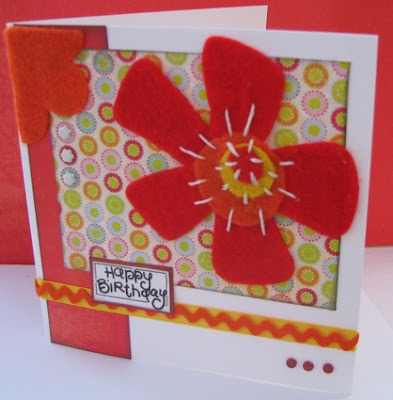 This one was helped along by a little make your own book from Poundland which included sticky backed felt pieces. The flower is actually made up of red and orange but they look the same in the picture. The cool corner is orange. I added a few stitches, some white and red brads, orange and yellow ribbon, a safmat sentiment and some BG Gypsy papers (inked natch) et voila! 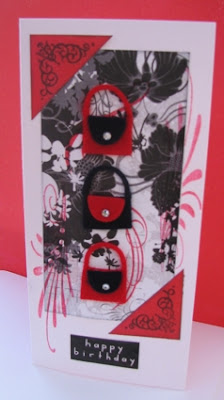 This one was a tad more elaborate. The little handbags are QK dies cut from felt. Now not all dies will work and they don't always work a second time. I have one lovely photo corner and then had to give up on a second. Bags are fine. But nothing smaller. Some Sizzix dies will also cut in my Zipemate as well. Diamente buttons and some Scarlets Letter paper. I inked and embossed Banana Frog swirl stamps. The stamps on the paper corners are Stamps Away corner stamps. Safmat sentiment using a 2Peas Cards font (ie the word happy birthday in black is actually one letter of the alphabet) 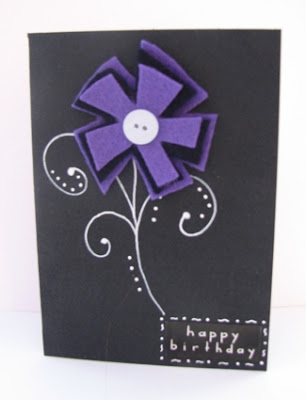 And the only one hubby likes. Hand cut felt flowers; same safmat sentiment as above; stem done using doodling genie and a white gel pen.
No news - just work this week. Although I am off again next week - not hols but work. Study leave in a mobile home in Clacton! No internet access (sob!) but lots of reading "proper" books and writing prayers and suchlike.The Oldies are coming to look after the children on Sunday so I also need to get the house straight. And tidy away my craft stuff. Eeeek!
Have a good weekend
And don't forget to check out the Daring Cardmaker Blog for more colourful felty fun!
Posted by Lythan at 9:47 am

The cards are all fab Lythan but maybe I share the same taste as your DH since the one he likes is my favourite too -- love the strong colours and simple shapes!

Totally Gob-smacked Lythan, at your gorgeous cards, I couldn't pick a fav if I wanted too.. each one is wonderful in it's own right. Beautiful, Beautiful work!

My Lythan you have been busy , great cards.

I think they are all wonderful. My favourite is the one with the bags - looks very oriental on screen - love the colour combination.

Another reason to go to Poundland then - a picture frame search (see Gillian and Esther's blogs) and now some felt. I'm always diving into Instore (aka House & Home)too - they have some great stuff for kids, which we can grab and use as well. Nice and cheap.

Terrific cards...I love the first one!

wow! THREE cards - you're such a show off, I struggled to make my ONE!

They are all fab, and I love that each one is so different from the others - you've got something to suit all tastes here, Lythan

Three fab cards Lythan. My favourite is the first one wit the big red and orange flower, its just so bright and cheery.

Great cards Lythan - love the first one, it's so summery.

My PC crashed a couple of weeks ago and I've just discovered that I have lost my links....which included you exploding box instructins. Could you pleeeeeeeeeeeeeeaaase point me in the right direction again??

All your cards are fabulous. I obviously share my taste with your DH as I prefer the purple flower one too.

Love them all Lythan but my favourite is the first one...such scrummy colours.

Oh - interesting that the blogger link doesn't work - I thought I had it set up! Here is my current blog....we changed to wordpress a couple months ago..
http://scrappydo.wordpress.com

Ooo on a roll with those felt cards, you go girl! I know your up for some fun,... do I TAG YOU!!! please see my blog for details

Lythan, you've been tagged. Come and see what I've got you into over on my blog.

Hi Lythan its me again ive just tagged you,go and look at my blog.