Had a busy and long day yesterday!
Job 1 was to buy DS1 new shoes. Went to Clarks (cos I like to think of myself as a responsible mother!!!). He tried on slip ons. They apparently didn't have as much room in them as the sales assistant would like but as long as he didn't grow much it might be worth the risk. He needs to grow! I am putting spinach in his cereal to build him up! Plus they cost £36 and as I did a quick how much patterned paper is that calculation in my head I decided the risk wasn't worth taking. He tried on lace ups. Which even he admitted felt better. went to pay and the sales assistant was having trouble. She kept scanning the price and shaking her head. The manager told her it was right. They were £5.
I know.
I thought even the shoe polish was more than that. But I didn't argue.

The rest of the afternoon was spent beginning a compy layout and making a card for DS2 to take to his friend's baptism party. I was thrilled that his friend was getting baptised; that he was having a party and that E had said yes as he is notoriously cripplingly shy. And doesn't like new situations. So over the last few days I have talked about the party and buying the preset and making the card and that we would start our grand family movie night when he got back.
Or so I thought.
I asked him 10 minutes before we had to go to sign the card.
Then I lost him.
He turned up in his sisters room saying he wasn't going. A "full and frank discussion" ensued when he claimed he knew nothing about the party, i was springing it on him and he wasn't going. My heavy arsenal of threats (which I will follow through on usually) was spent. I wasn't sure what was happening at the party so decided that the only thing to do was to take present and card and explain. The parents were so nice and understanding (we'd never met before) and I stayed for ages. Which helped me see that
1: E would have hated it (there were girls there and everything. And boys who care about their clothes and hair. I dream of having one of those)
2: Obviously all the conversations I thought we had either we didn't really or he didn't hear what I was saying
3: he can't help being cripplingly shy and ill at ease in new social occasions and I shouldn't punish him for that

And as I had been away from home for an hour thought that was long enough and we had a good talk and he even said sorry (which is quite something). I did first but hey, I'm the adult and I have to give ground sometimes (shucks)

So Dr who and grand Family Movie night were back on. Our plan was to watch all three Lord of the Rings films in one go.
Now there are two things you need for that
1: lots of time
2: the dvd's

We didn't really have either. But I went to Tesco and lo a hugely expensive set was there, (plus some bright pink pants and feminine hygiene products). I loaded it all onto the conveyor belt and then noticed that the cashier sharing the cubby hole with mine was one of my church members. Cue Lythan trying to hide the several pairs of bright pink nicks and panty pads under the rest of her shopping...

And really 8:30 is not the time to start watching the trilogy. It was only 15 minutes in that I remembered how long the first film was...
And readers, the children talked the whole way through it. Cheering characters on, laughing at the silly elves hairstyles, spotting Gollum etc. For. three. hours.
By film 2 they were not as talkative - because I brought out the snacks. At 1:30 when that finished we decided that was enough as we had the Baptism service to go to today. we will watch the other next Sunday evening as it is Bank Holiday Monday next day!

The baptism was intensely moving and it was lovely to go to church as a family (sometimes we are in 3 different churches on a Sunday!). Our yawns were not to do with the quality of the sermon but the late night!

I haven't told you about the chicken rescue Phil and Carys did, but will save that for another post
I leave you with a few of the cards I made using old Self Addressed kits! 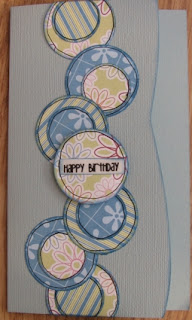 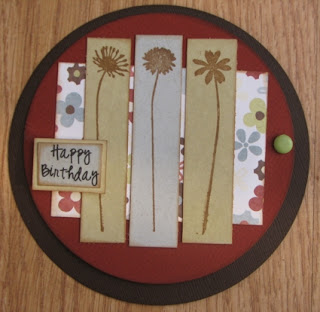 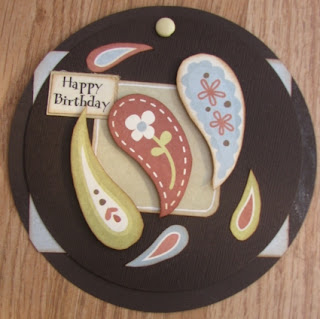 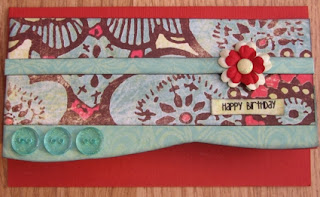 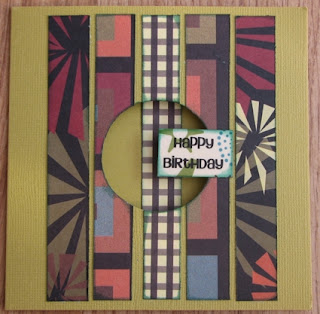 Love all of these cards Lythan! I especially like the first one with all the circles on, very simple but really effective, great for male cards too!

Those Cards are simply exquisite!!!
Loving them sooooo much (mind you I always love your stuff)

You are brave to even contemplate watching all three lotr! Loved reading about your family! Bless E! I remember once asking to go home from a party as I felt so shy!!! And what a bargin in the shoes!! Ibrahim is still in his September shoes!! I keep taking him to get them checked but luckily they seem to be fine...Im trying to hold out until Sept before paying rediculous amounts for a pair of shoes!!

I love those cards and papers, lovely and funky!

I think you should use the £31 saved by the shoes to buy some more stash!!

Oh I do love to read your posts... you are such a wise parent in understanding E..
and ROFL at you hiding your pink pants... :O)
I love these cards Lythan... I really love how you make the circle ones..