that was our challenge on Daring Cards this week
10 Minute Christmas Card
We want to see cards that take only a few minutes, but of course don't look it!
I thought I had done well until I saw Kathy's bountiful crop! Anyway I managed 4 in about an hour and some are a bit fiddly so there!
But first, my pressie from Sue. It is a mini book featuring the 12 days of Christmas. there are so many fabby details, here is just a sample. 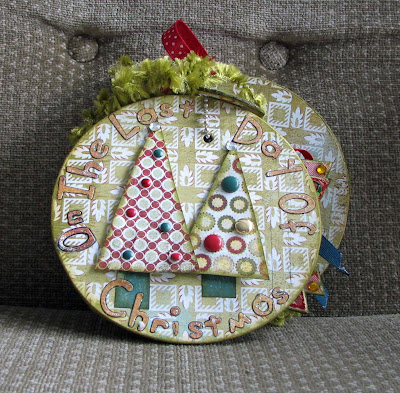 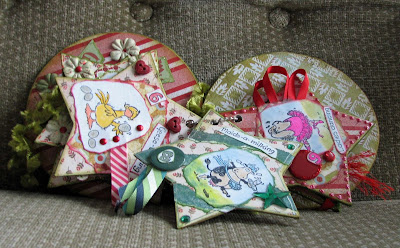 thanks sooooooo much I really appreciate it!

And my cards...
A version of this one might just end up being my Christmas card next year! 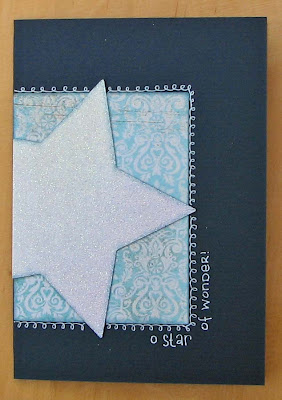 a blue pearlescent card base (haven't got many coloured ones left. I fins the colours of card blanks either too pastelly or too bright if you know what I mean. If anyone knows where you can buy Bazzill type coloured card blanks I would love to know!)
some lovely off white glitter card. Most of my glitter card has gone to church craft club now but I kept this one as I love the colour. Of course I only have a little scrap left and no idea where I bought it. I cut a Sizzix star, cutting off the edge. as you will see I am on an off the edge kick at the moment. BG Figgy Pudding paper, distress ink edging and some doodling and it was all done. 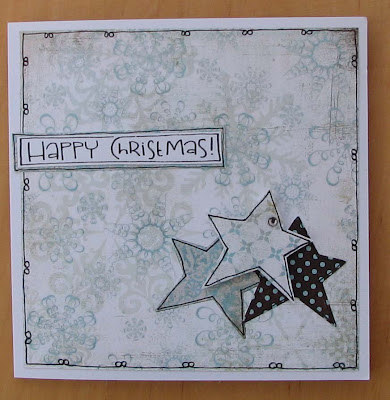 this one is based on a card from a Card Inspirations christmas special and is dead easy. Same set of paper for all my cards (Figgy Pudding) Stars cut with a QK die. Doodling, blinging and foam padding followed! 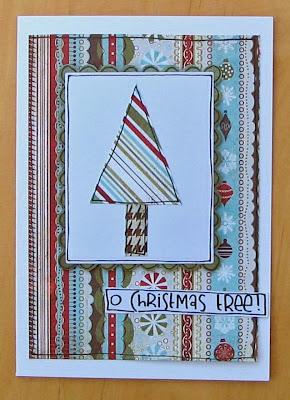 This one took longest just to get it all ok. Nestie frame, handcutting and doodling and that was that. So dunno why I had to fuss so much! 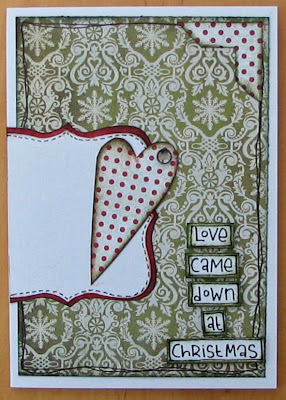 I think this one is my favourite! Journalling spot cut using the Robo - I made a few a couple of days ago and they are handy to have around. QK heart, lots of inking and doodling and apart from a gem "and that (said John) is that" (from one of my favourite poems. It is really, really deep you know)

Now this is a bit of a long shot but a few weeks ago I thought I read somewhere of a font that created journal tags - it was just using the numbers, no letters. I thought that I had saved it and that it was good to go, until I went to use it. I can't find it! I even downloaded a font manager and have sent ages trawling through. Now I am sadly beginning to think that the whole thing was a dream. Was it? If so how sad am I that I dream about fonts and craft robos!
Posted by Lythan at 12:56 pm

Wonderful card, love how you used the Basic grey papers I love these.

These are all truly beautiful! Pascale :)

Wonderful cards Lythan - you made loads!
That little book is gorgeous, aren't you a lucky ducky?

Fab cards, I especially like the blue star, it is so striking

Lythan i love all your creations, thank you for your comments on my card. I especially enjoyed reading your blog (I giggled alot) I hope we become friends

Your cards are just fabulous - and all in an hour!!! :o) Love your little pressie too.

Love your quick makes Lythan, they don't look quick at all but super stylish. Love all your ideas for them , thanks so much for the inspiration as I really do need to get a few more done and am seriously running out of time! Chris

What wonderful cards Lythan, I especially love the last one!! I just love your little pressie, just beautiful! xox

All your cards are fab! But what's new they always are. Thanks for the chuckle when I visit your blog. Makes my day!
Anice xx

Ooh, your cards are lovely! This is my first visit to your blog. I hope you will forgive me for 'borrowing' the sentiment on your last card. I've been thinking for days on just the right thing to say in a shadowbox I am working on. I think that will be perfect. Thank you for the inspiration :)