Its been quite a week!

I had a brilliant study leave talking to different people - and transcribing about 16,000 words! Thanks to a rather wonderful (Holy Spirit guided?) coincidence, I had booked a special something for Friday night which fitted in perfectly. As a thankyou for doing something a dear friend had treated Phil and I to a night at the theatre combined with a stay at a London hotel. It turned out that the hotel was only 10 minutes walk from the United Reformed Church central office which was where I was doing my interview that day. So rather than go home I ate a lunch bought at the King of Falafels (a roasted veg wrap - and they roasted the veg while I waited. Yum) at a quiet park and did some more reading (spoiled only by the rudest girl in London who was so rude I am not even going to tell you what happened. I wanted to intervene, really I did but thought she would probably smack me one) until I met up with Phil at the hotel.

I had phoned him to ask him to bring a camera but he missed the call so I have no record of the wonderful afternoon and evening we spent at the hotel and wandering round London. Ah well. We stayed at the Grange White Hall which is right next to the British Museum. Then we meandered around Seven Dials and Covent Garden and then had a meal at Carluccios which was soooooo tasty. Then we went to find the theatre and we were a little early (what me - early for the theatre just in case? Who would have thought!) and spotted a little garden just behind the theatre. Wow what a find! Its called the Phoenix Garden and is a teeny tiny oasis of calm and beauty. We went to see Blood Brothers which was fab and it was a treat not having to worry about getting the train home again.

Next morning we had a little stroll around the British Museum (still mostly closed we were that early) and then travelled home again to discover the house and animals all still standing. Phew!

Which all goes to explain my lack of card until now on Daring Cardmakers. It is the first Friday of the month (again?) and the choice was poppy or gladioli. As I have a poppy stamp that is what I went for 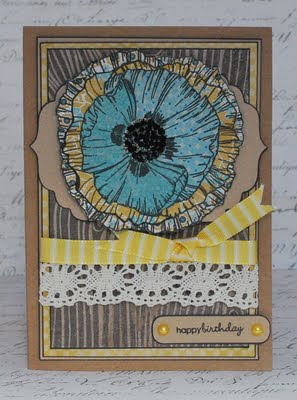 but I decided to give it a twist as I have used it straight for a DCM card before. So I stamped the layers of this stamp onto various MME Stella and Ruby papers and added some black Glossy Enamels in the centre
Other Details: Cardstock: Papermania and Fancy Pants; Stamps: Papermania and Imagine That; Ribbon: Anitas and from stash; Dies: Spellbinders; Embossing folder: Cuttlebug; Gems from Imagine That. 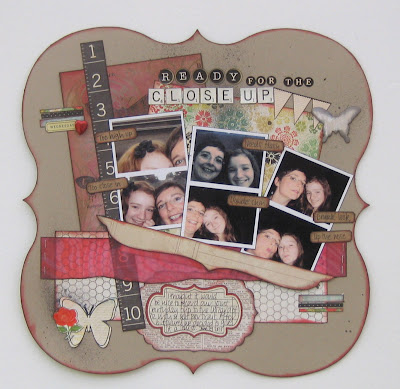 When Carys and I went to see the Wizard of Oz for our birthday we took a camera with us and tried to take a nice photo of the two of us. Guess our arms are not long enough...
Details: Cardstock: Fancy Pants; papers: Tim Holtz (coloured with distress ink), Echo Park, Basic Grey and MME; Elements: Echo Park, Pink Paislee, Jenni Bowlin; Spell binder dies

Close up of the words and bad photos! 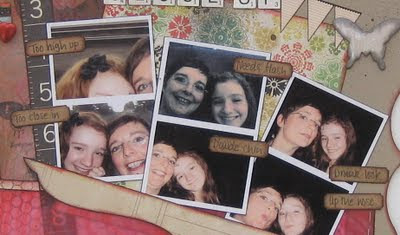 Its back to the real job tomorrow but a week away from the cut and thrust of church life has me raring to go - at least in the short term!

I love your card and your scrapbook page - the arms length photos had me smiling... guess we've all tried to do it at some point! I really like the layers of paper on your poppy card. I should try stamping on patterned paper more often.

I’m sorry to hear that that your quite lunch was ruined by someone. Why do some people not give a dam for others in public places.

Glad you enjoyed Blood Brother’s, I’ve seen it three times and it’s one of my favourite west end shows. I was lucky enough to see Barbara Dixon in the lead and she was ace.

Your DCM card is great, I love that you’ve gone for a Blue Tibetan Poppy rather than the traditional Red one and your LO is so funny. The photos may not be perfect but they are all perfect, if you know what I mean.

Love that poppy - great idea to give it a bit of a modern twist, much more interesting. Love your layout too x