Friday morning 8:45. Loaded up the car with all of Hywel's Uni gear.
1ish arrived in Hartlepool. Ate lunch and then had a trip down memory lane driving by the old house, the old school  and ending up on my "patch" the Headland. To find two new statues
This rather lovely one of a fisherman (with the photogenic St Hilda's in the background) 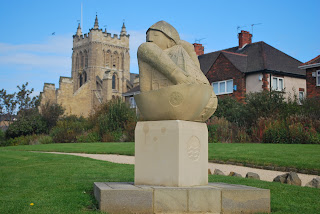 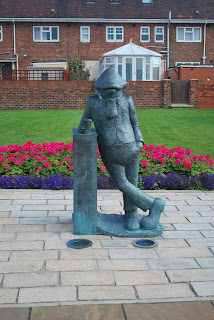 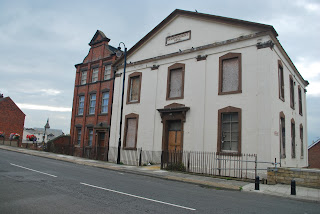 and then there was this much less photogenic scene. my first Church. It was closed down about 11 years ago now after I left but I was the last Minister. (The closing down is a long but not altogether sad story) Its been sold for a while but obviously redevelopment hasn't happened yet. Although the shape is nice from the outside, it would be a nightmare really and pulling it down might be for the best. better than this anyway. The halls could be entered from the street below as they were under the church and the Sunday School rooms to the left are about 3' lower than the church building so there are stairs EVERYWHERE. It was very hard to take photos but somehow I thought I should.

Friday 3:00 arrived at the home of Sts Elspeth and Andrew who offered to look after Hywel as he couldn't move into his Uni accommodation until Sunday. So they moved him in today (all arrived safely!). It saved one of us having to go back up to Teesside today.

Friday 4:30 after having an all too short catch up with Elspeth (Everyone needs an Elspeth in their life - she is kind, caring, funny and always a delight to chat to. She saved my life many times when I was a new mum and is obviously still doing so 19 years later!) and saying goodbye to Hywel (who was so anxious about the journey ahead she almost forgot to say goodbye and give her first born son a farewell hug? I couldn't possibly say) I did the scary thing of driving to Lindisfarne via the Causeway. It is longer than I thought it would be but at least it was still light! My friend Ruth who has been scoffing at my fears almost missed the tides and had to drive over in the dark. Won't be scoffing again eh Ruth?

Friday 7:00 booked into the Lindisfarne Hotel. Having had to phone them up and ask where it was. There are only about 20 houses/pubs/hotels on Lindisfarne but my Satnav had taken me past it and I was lost. How embarrassing. Still the warm welcome from the lovely Sean and the gorgeous room made up for it 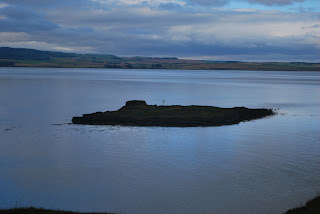 Friday 8:00 Meal in Rachel's new house making new friends whilst waiting to see if the old friends would make it over before the tide. And then catching up with them after they did.

Friday 11:00. Bed for me. Phil at home was getting ready for 5 hours in prayer overnight to prepare for Back to Church Sunday. What a star.

Saturday 7:30 Out jogging alone this path to the castle and back. In the rain for some of it as well. I never expected that all the words in that sentence would ever apply to me. Still only doing 3 minute runs but I'm hopeful of improving! 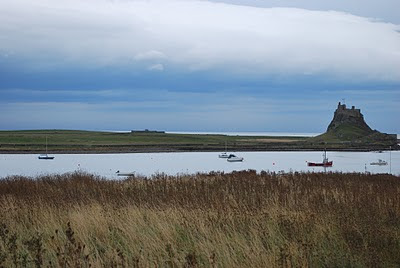 Saturday 10:00 Walking off a rather fab breakfast by wandering round the island and catching up with St Cuthbert 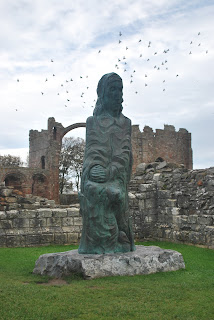 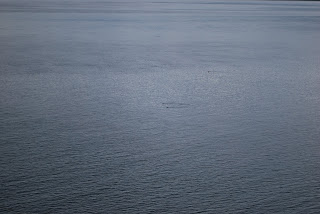 1:00pm Lunch with some lovely people and then a walk before getting ready for

4:30 The Induction of Rachel as Warden of the St Cuthbert Centre. I did a little singing, Bible story telling and preaching. I described Rachel as having" a wise head, warm heart and creative spirit" - all very true!

6:30 Getting changed in the Disabled Toilet at the Centre. Was down to lacy bra when... clearly door not locked as much as I thought it was. Hope it was only one poor chap and not the whole hall that saw me...


6:40 left Lindisfarne for the drive home.

12:50 arrived home. Hours between rather tedious but at least I now know I can drive that far on my own.

Sunday 9:30 first of two services. praise the Lord he gave me the strength to get through, plus all the memories of the day before helped. I am pretty sure that all the mistakes would have happened even with more sleep actually
Most of the rest of today has been recovering! I'm so glad I did it though.

But it does mean that I am late with my Daring Cardmakers card for this week. Jo came up with a wonderful dare - Green Eggs and Ham, using Dr Suess as inspiration. Thanks to the wonders of t'Internet I came up with this 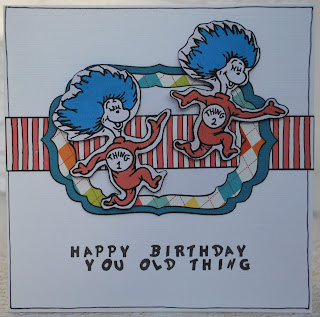 Quite simple really. Outlined papers, die cut using Nestabilities, printed on sentiment (thanks to Sharon for the font tip) and that's about it really.
So if you have had to read through ALL that stuff about my road trip when you really just wanted to see the card - sorry!

Wow Lythan what a busy time you've had - I'm amazed you've managed to come up with such a brilliant card with all that going on!! The photos look fabulous and it was obviously worth the scary drive as it looks beautiful.

I love Thing 1 and Thing 2 they look fab on your card. - hope life is not too hectic for you at the mo and you can still manage to fit in ( a little) crafty escape time

I am so glad you managed to get to Holy Island without getting caught by the tide. I hope you enjoyed your time there. You were very brave, actually. Overcoming fear is not easy.
Kath