Sorry I've been quiet again but we have been away and I never like to broadcast it first! 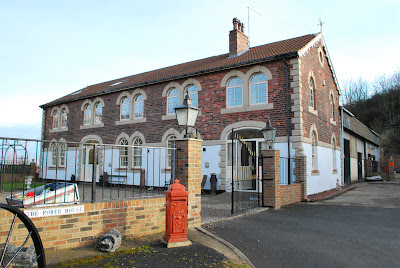 We stayed here at the Power House. Sadly not all of it! We had the first two sets of windows on the right. The other part looks gorgeous too (I had a peek in the windows and on the website). It was in Skinningrove and this was the Power House for the Mine there. I would tell you more about it but the Mining Museum that the house is in the grounds of does not open until April. How the teenagers in the party sobbed. Skinningrove is very much an old mining village right on the coast. It would have been thriving at one point - if harder to live in due to pollution etc. We were away for half term and like to be near Hywel in Teesside. We thought we could only see him at the weekend but he was able to come and stay for 24 hours with us in the middle which was lovely.

Here is the front room of the house 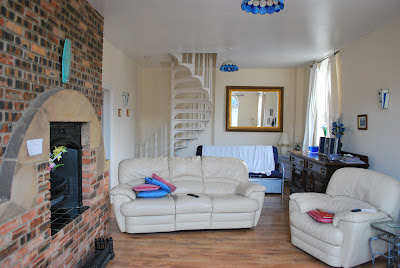 Isn't that lovely? And best of all those stairs meant that the dog couldn't come up and visit during the night! We had a gorgeous 4 poster bed in our room. Really lovely. You can see more here . Emrys had an interview at Teesside (for the same course H is doing!) but we couldn't stay in the cottage as you can't have a short break including a friday night. So we decamped to the Grey House hotel in Middlesborough as they accept dogs. This was also fabulous. We were all booked in to share one room with lots of beds but as there was a cancellation we were allowed to use two at no extra cost. And Phil and I had another 4 poster bed!

During the week we got to see a lot of fillums ( as they say in the North East. It was kind of sad that the kids struggled to understand the gentle Teesside accent. It is their heritage, having all been born in Hartlepool General!) Before we left on Monday we went to the cinema to see Woman in Black. Mixed reviews from the family. Carys - studying it at GSCE didn't think much of it. I was quite scared myself! Then we watched Limitless from Tesco DVD. Hmmm. Not a very moral tale and lots of questions about plot. Poor. At the cottage there were some DVD's including The Adjustment Bureau which I had wanted to see but can't get on Tesco DVD for some reason. I'm glad I saved my money... This was followed by Inside Man - which I liked but only averaged a score of 6.5 from the family (yes we give marks out of ten for fillums). The last night we watched 50 First Dates. Oh. My. Days. Not my sense of humour and a rather nasty hero. Drew Barrymore was cuteness itself but why she fell for him, brain injury or no, I don't understand. We had the rest of the week off but then tonight finally watched Robocop. A tad violent but it has worn pretty well. Emrys gave it a remarkable 20 out of 10.


On our return from the North East I finally got to do some crafting. To have a real break we need to get away from the house but I can't take much with me. So better late than never is this weeks Daring Card on the theme of Postage People 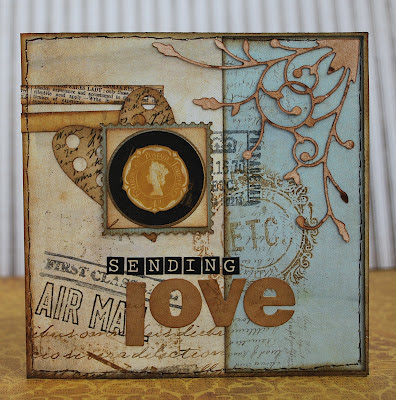 The lovely Sue H bought me some BoBunny papers and stamps for Christmas which I used on this card. I also remembered I had a cuttlebug square stamp die which the focal image rests on. I bought some dies from Dies to Die For including the Dienamic alphabet used here and Tracey bundled in some die cuts with the package including a purple shiny corner treatment. I tried to turn it brown and failed - until I thought of turning it over and adding distress ink to the other side. Doh.

As this post is now epic I will just share one layout. It is based on the Studio challenge sketch for this month which I just loved. 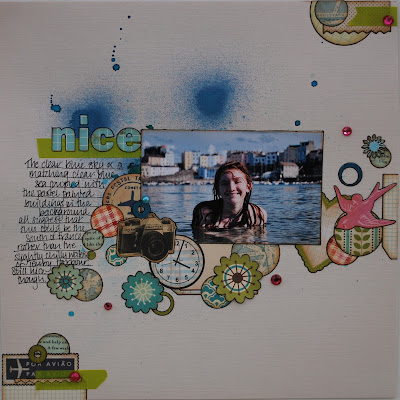 I did try using a mask for my mists (you can just see some circles) but all my blue mists are cloggnig and came out as splats and drips. Hmmm. I combined some Die cuts I bought at Imagine That, with October Afternoon papers and stickers, some washi tape, gems and that alphabet again. I am following Miss Smith's Just One Sketch class which is brilliant although I haven't used it properly - just her sketch once and now her style of journalling which i just love. The title is a play on words as the sea looks balmy. How was the photo taken? Phil took the camera (carefully) into the sea. That is the summer sea at Tenby not the winter sea at Skinningrove I hasten to add.
Here's the words close up if you want to see them 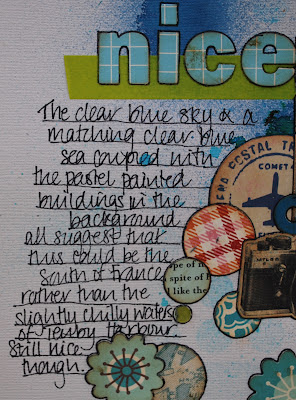 I MUST go to bed now as I am off out super early in the morning to drive 2.5 hours to lead a session on team ministry in Salisbury. Yes it is a long way, but it does give a chance to test out my dissertation findings on real people. I am very, very nervous. You wouldn't think I do public speaking at least twice a week would you?
Posted by Lythan at 11:35 pm

Thanks so much for playing along with us at The Studio! I love your take on our sketch - especially your outlining and pen lines for the journaling - great technique!

Love your page with all the misting and piles of circles it's beautiful (the house looks amazing and the card is just gorgeous too :)) thanks for playing along.

Really great take on the sketch, lovely layout! I love Tenby!:) Thanks so much for playing along with us!

LOVE the LO and your fillum marks I usually use Rotten Tomatoes but yours look pretty fine :)