Getting old and forgetful

It was the annual birthday extravaganza yesterday (having two family birthdays to celebrate on one day takes some organising). At least this year I wasn't opening presents while in labour, as I was 17 years ago, and we weren't all up at the crack of dawn to get through it all before the school run. No, Carys didn't need to be in Stagecoach until 10 which was pretty civilised really.

She had loads of Supernatural dvds (she has seen them all and now is going through them again!) and some cute PJ's and other clothes. Her card was kind of home made but basically features a photo of Sam and Dean the heroes of Supernatural and so not really worth sharing here... I had a new Cuttlebug (yay!) so no more roulette with the old one. Which I thought would totally break a year ago so it has been a little hero really. I also received from one of my sons a Dienamics die that I really wanted. I gaped at him open mouthed - was he psychic? He looked a bit nonplussed and muttered something about a birthday list. Uh oh. I am now so old I genuinely forget what I have asked people to buy for me.

We had a lovely day - lazy start for all apart from Carys doing her dress rehearsal for a show next week. Then we watched Man of Steel in the cinema. Pants. (Still it is fun to complain about a film), had a walk round Torquay in the sunshine (gasp) and had a lovely meal in Pizza Express whilst discussing the merits of Scrooge McDuck. As you do.

All of which meant that although I got my card up on the Daring Cardmakers blog in time - my post about it has been rather lacking! the theme this week was Forgotten Treasures. Miri asked us to find those things we were given/bought that hadn't been used.
Like last week I found this tough because I tend to use things when I buy them. Then leave them unloved for a while! So finding "virgin" items was not that easy. But in the end I managed it (what a hero) 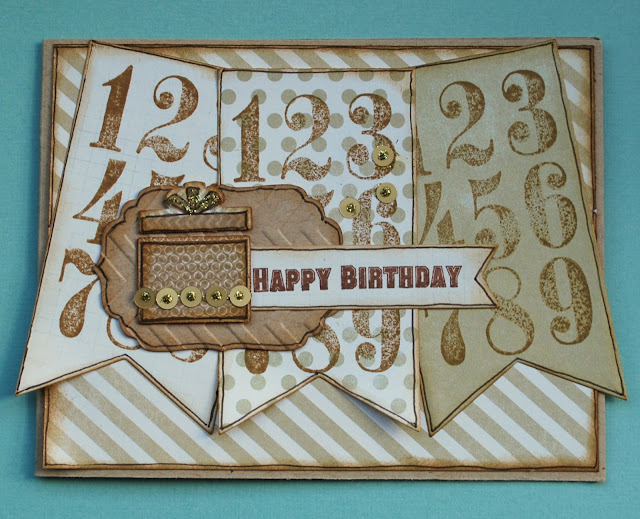 In fact i found an unused stamp (the numbers) and an untouched paper pad from Fancy Pants in these neutral tones. I stamped the stamp three times onto various papers using a brown distress ink and then die cut banner shapes (yes it would have been more straightforward to do this the other way around). I was able to hang the banners over the edge like this because I was using Letter sized cardstock which means there is width to play with if you put it into a UK standard sized envelope.

I die cut and embossed some more kraft cardstock and then stamped and die cut the present set from Clearly Besotted. The sentiment is also from CB and is stamped with Chestnut Roan chalk ink. Obviously it was at this stage that I decided that, despite having inked around all the edges a bit of pen work was needed. It is not easy with overhangs and embossing I can tell you. My fab brown pen is nearly out of ink. I went to order a new one. They are discontinued. Why? Best brown pen ever as it is really dark. So I have ordered a few other ones to try.

This card looked good as a neutral male one so I added a bit of bling. Men don't mind a bit of bling do they? Well, tough. Some gorgeous matte gold sequins and some gold glitter glue finished it off.
I'm finally writing this as I wait for Carys' ever so slightly late birthday cake to cook and once that is done I can play with all my new goodies - if I remember where I put them...

Your card is lovely, Lythan! Isn't it strange that we all find "unused" craft material if we have a good look in our stash =)
And HAPPY belated BIRTHDAY!!!
It sounds like you had a great and relaxed birthday weekend.