for many different reasons it has been quite a week. Which is partly why I am late to the Daring Cardmakers party (again). I decided last night that I deserved a glass of Prosecco (only small!) - my new chilled tipple of choice following our 25th wedding anniversary celebratory trip to Florence. If I haven't mentioned it much as yet, fear not, I will be boring you rigid over the next few weeks. 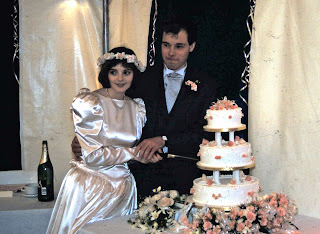 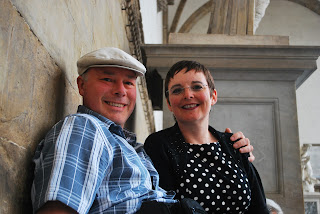 (we've swapped sides in the second photo though!)

Anyway, more on that later... back to the Prosecco. Unfortunately it was so nice I had a second glass. And discovered that I can't drink wine and craft. I can drink cider - or soft drinks obviously, but I had a horrendous time of it with this card and a layout that will appear on the Quirky Kits site as well. (I will be honest about the mistakes but possibly not why. And it isn't the layout that sings the praises of Prosecco. oh dear, I am sounding like I drink a lot now...)

So this card got completely mangled and I was VERY cross 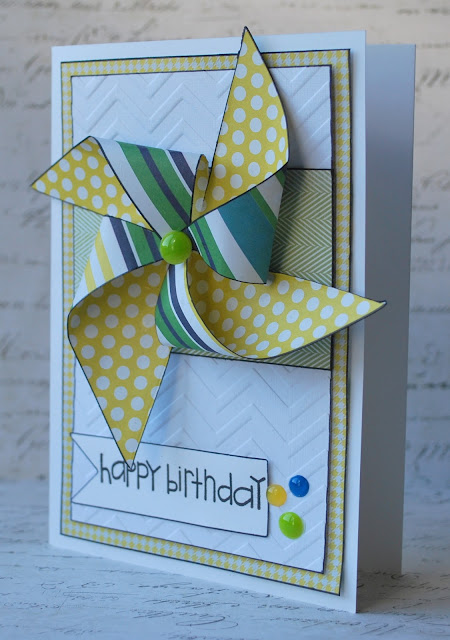 See I had got to the very end of the process - the pinwheel was stuck down and everything and I had just put the sentiment banner in place when thought "what this sentiment lacks is a bit of black outlining". And it looked good. But it meant that everything else needed a black outline as well.
So first I tried outlining in situ. Uh-uh. Then I tried peeling everything off, with greater or lesser success. Then my hand skidded across a piece I didn't have enough paper to redo. Uh oh. Then with a new white panel, a few choice words and a sense of awe that the pinwheel had survived the mauling it needed to outline it... I found I had lost the x!?xz sentiment banner. It eventually turned up in a drawer (?)

SO: why this card? Well the challenge this week, set by the wonderful Kathy is to "Make it yourself".
Which I did and I am very excited about it. "But anyone can make a pinwheel (and almost destroy it and rebuild it again)" I hear you cry.
Ah-hah!
Its not the pinwheel that is THE embellishment wot I am featuring.
Oh no - it is the enamel type dots made by me!
These are made using Beads in a Bottle. I found an old thick piece of acetate and made various sized blogs, trying to keep them fairly flat 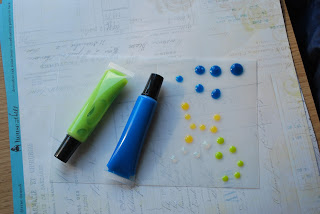 when they were dry the next day they simply popped off the acetate sheet. 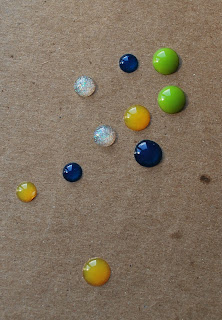 and were ready to use. I think they went pretty well with my new MME paper pad. The green is my fave as it is opaque. 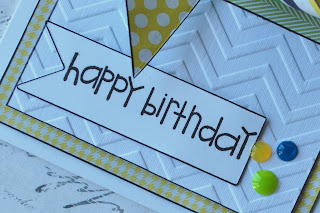 After that I tried some Liquid Pearls. That is awesome (although I may have put my finger on one of them to check if they were dry) Here are some in use on that Quirky Kit layout (sneak peak ahoy) 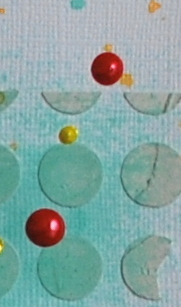 How cool are they? I still love the real Enamel Dots but I have a feeling I will be trying out all my Liquid Pearls to make my own too. You can see the difference to using them "neat" as those little yellow dots are made with the same stuff.

So I don't blather on too much about the actual 25th wedding anniversary - which was low key really, after the drama of Florence! Here is the card I made for Phil. 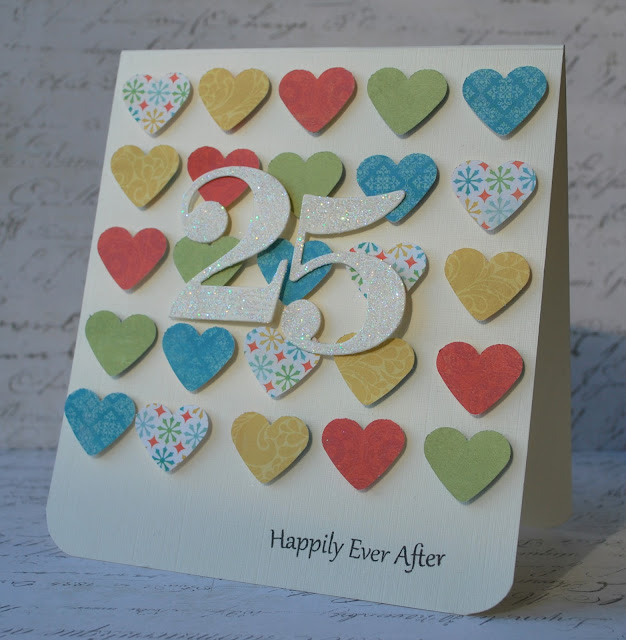 I was so nervous about making a good card (why?) that I left it until the last minute and then had major strops! It is a wierd sized card as one strop involved cutting down an A5 card into some sort of square. I also had first cut out loads of different die cut hearts and had another strop when they just looked bad. I just had enough of the papers left to punch smaller, regular hearts. And let me tell you that if putting tiny foam pads on 25 tiny hearts doesn't prove love and devotion I don't know what does.

I used another MME pad; PTI number dies and some glamour dust. The sentiment is from a Simon Says Stamp Set. Inside I put another one which says "the best is yet to come" - but I didn't photograph it before writing a soppy message so you can't see that!

Do have a look at all the wonderful DIY embellishments the DCM team have made and do visit again if I promise not to mix crafting and Prosecco every again. (yeah, right)

Your embellishments are fab Lythan and happy anniversary. :)

I thought the pinwheel is your handmade embellishment and I like it a lot ... but the enamel type dots are such a clever idea! I have to try this right now ...

I love both your cards, that pinwheel is fabulous. I'm going to have to have a play with all the bottles of liquid pearls I have as your embellishments look so good. Happy Anniversary to you both too xx

I thought the pinwheel was the embellishment and I like it a lot. And I think the black outlining looks really great (worth the trouble?). Not to mention your enamel type dots!

I LOVE those blobby things! I'm going to have to hunt that stuff down.... Love the pinwheel too - and the lush papers you've used.

I hope you had a wonderful anniversary - well done on winning Silver ;)

I love your idea for the anniversary card so much that I may need to borrow it a bit for our 20th in a few weeks time.