I'm actually posting on the right day for Daring Cardmakers today as there is a blog hop going on.
But I have lots of work related stuff to do (like photographing some knitted sheep and writing a press release) so I have to be limited in what I say (hard for me!)

this is the fourth and final week of our seventh birthday celebrations and as it is close to the end of October we have gone for a Spooky Birthdays theme
this was helped by some fabby chipboard from Tando Creative who have also offered a prize in our special draw, along with Imagine That (look on the DCM blog for more details). PLUS there are more prizes from Funky Hand, Charmed Cards and Craft and  Crimson Cloud available if you join in with our blog hop - you need to comment on the blogs of all the cardmakers featured this week including our amazing guest designers Lou Daubney and Julie Kirk 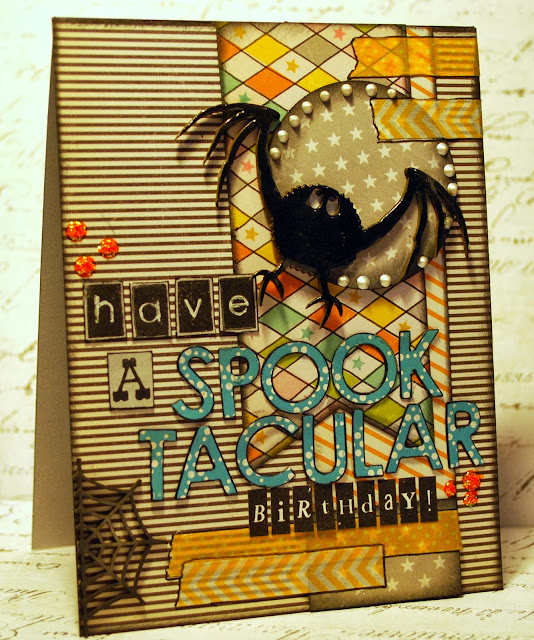 Boy did I make a meal out of this one! First choosing the papers was tough. I opted for an old faithful October Afternoon Midway 8x8 paper pad in the end. There is a nice mix of colours and black/grey in there. I added some black lines to the diamond panel to give more definition and everything had a swipe of Black Soot distress ink around the edges. The chipboard web and bat were covered in Balck Soot as well (the web is less grey in real life!)

"Have" was stamped with a lovely set from Imagine That and the "a" is from Banana Frog (sadly no longer trading). "Spooktacular" is a die cut alphabet (Parker I think) and "birthday" is made from Making Memories stickers that are almost 7 years old themselves. Originally there was a die cut word saying birthday but there was an accident using black enamel accents. It is not the first accident I have had where they have splodged and ruined something so I am going to have to consider drastic action over that. Here I had to add an extra strip of grey star paper over the top and more washi tape. My other stickles decided to misbehave a bit as well (can't be my fault though!!!) but it all kind of worked out in the end.
I have no idea who to send this card too so if you know someone who would love it, let me know and I will send it to you! (NB leave a few weeks before you need it as I might need reminding...)

Now must go and do something with those sheep......

thats is one amazingly cool card Lythan, I love the variation of typefaces, just looks fabulous!
good luck with the sheep...!!!
thank you so much for having me play along with you all today xx

My stickles misbehave as well!!! A splendid card though. I might give the glossy accent stuff a miss I think. :)

oh yes, stickles can be a bit of a nightmare, even if you think you're clever and try them on a bit of scrap first. I love your card though, and that funny little creature really makes me smile.

Fantastic card. I didn't know you get black glossy accents. Well done on this super card.

I adore this card! The different fonts you've used and the way you placed that little monster on the circle's edge. Awesome.

Love this, Lythan - such great colour and such fab use of the chippie bits