I've been missing from the blog for 5 weeks or so. Loads of reasons, mostly tedious and once you stop it is hard to start again
Which means I missed my blogaversary - I haven't got a date on my first post but it is something like the 8th May 2006. So 8 years I've been slightly squiffy now. I will put together a little giveaway soon (I'll admit it is mostly things I have accidentally bought twice. Its my age). Perhaps when I am on Sabbatical. I am going to be missing from my job for 3 months. As a Minister we get paid leave every 10 years (mine is every 11 at the moment though!) and I will be gadding about in the summer as Pilgrimage is part of my theme. But I am also going to put some craftyness in as well and may well use this blog as a record for that - or set up another with a link. Probably the former as the latter sounds complicated.

I'm missing a bit of skin as well. Two smallish moles were taken away and then it was decided they needed to take more skin. I'm longing for the stitches to come out as I am feeling like Frankenstein's monster at the moment.

I will try and catch up with myself but for today will just recap on those Daring Cards I did and haven't blogged. I'll go backwards though  - from feathers to football to flags
Feathers is this week's theme from super Sharon.
I made what was going to be a quick card last night which turned out to be not so fast 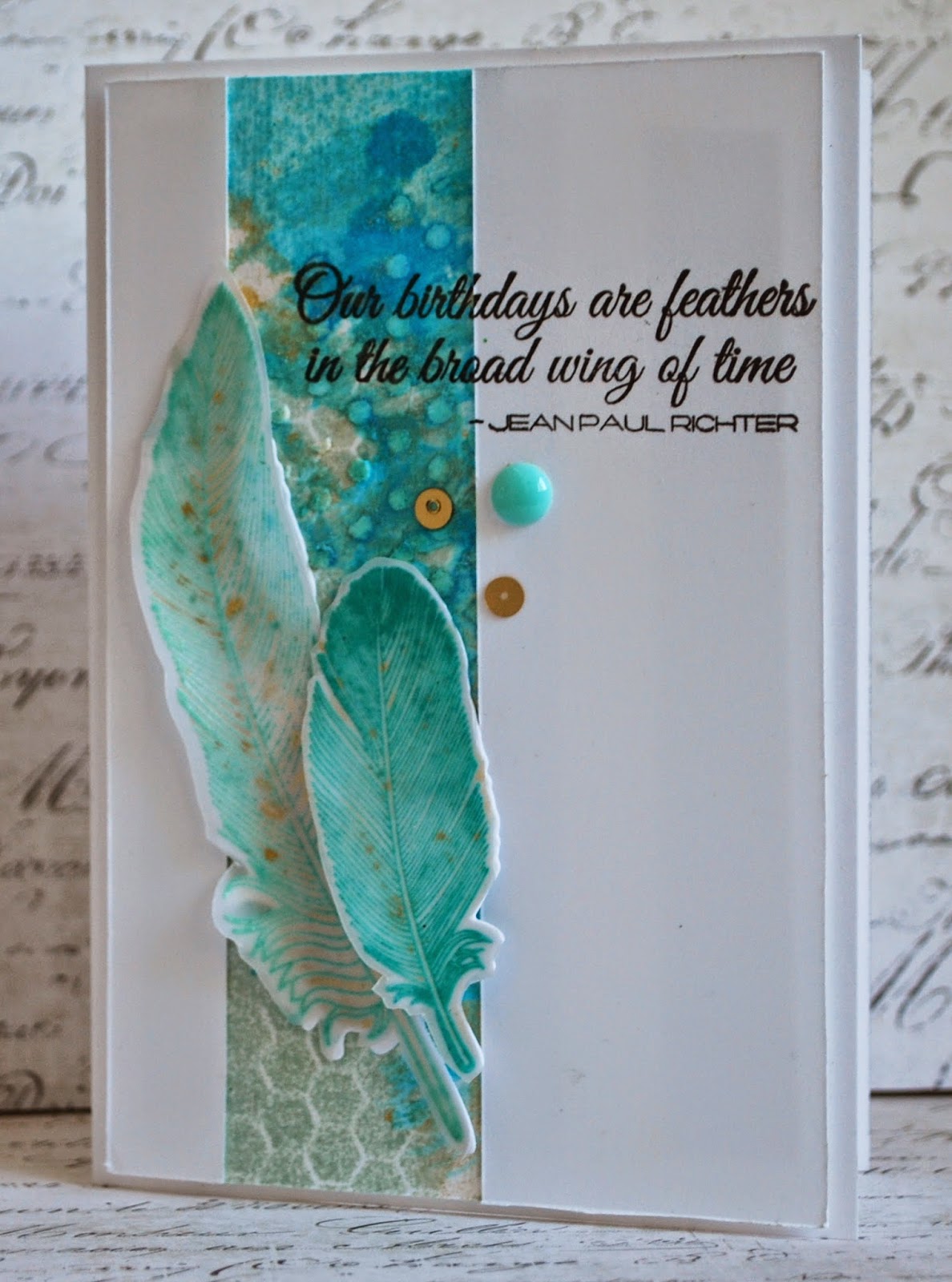 I knew that I would use my lovely Clearly Besotted feathers. I have some extra thick vellum from Craft Creations which takes embossing like a dream so I inked the feathers using various dye inks and added clear embossing powder. I cut round the feathers and they were all transluscent and lovely.
Then I decided to do a background as I am currently enjoying the Online Card Classes Watercolour class. I started by adding some white stencil paste to a dotted stencil.
And then I was impatient and didn't wait long enough for it to dry. So when I put ink on top the dots turned to splodges
So I started adding things to try and cover up the mess
And spilt a Tattered Angels Mist over it (the lid was off so I could flick some dots)
I decided some gold would help (I almost added yellow instead but THAT was actually averted). Then thought there ought to be gold on the vellum.
Which of course then crinkled up - as it has done every time I have tried this....
So I die cut the feathers from white cardstock using the matching dies and stuck the vellum down. 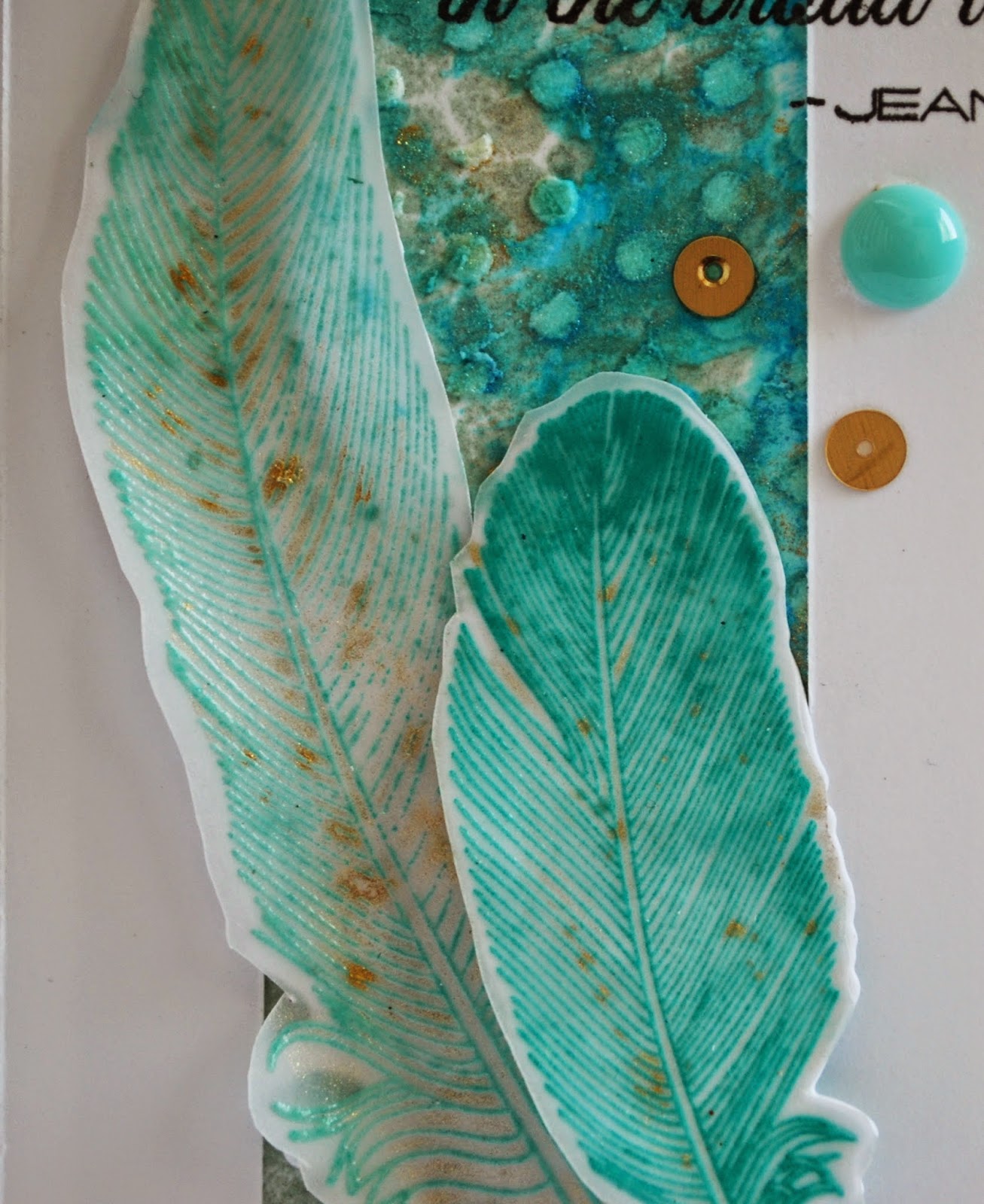 I reckoned that although the whole panel looked one hot mess I could maybe just use a sliver of it - which is what I did. The sentiment was stamped over the top (from the same CB stamp set).
I placed the enamel dot down, decided I didn't like it there - but it took the paper up with it so it went back down again...
and we wont mention the fact that I didn't notice the odd shape of the gold sequin.
Considering the catalogue of disasters it isn't as bad as it could have been...

Last weeks dare was from the amazing Jo - she wanted us to be inspired by football.
It was good timing for me as I need to make a card for Phil's 50th birthday - which is today. He is a big Bolton Wanderers fan and had mentioned that the elephant logo is coming back to the kit - much better than the rather boring dark blue and white of the strip. You can see the logo here. 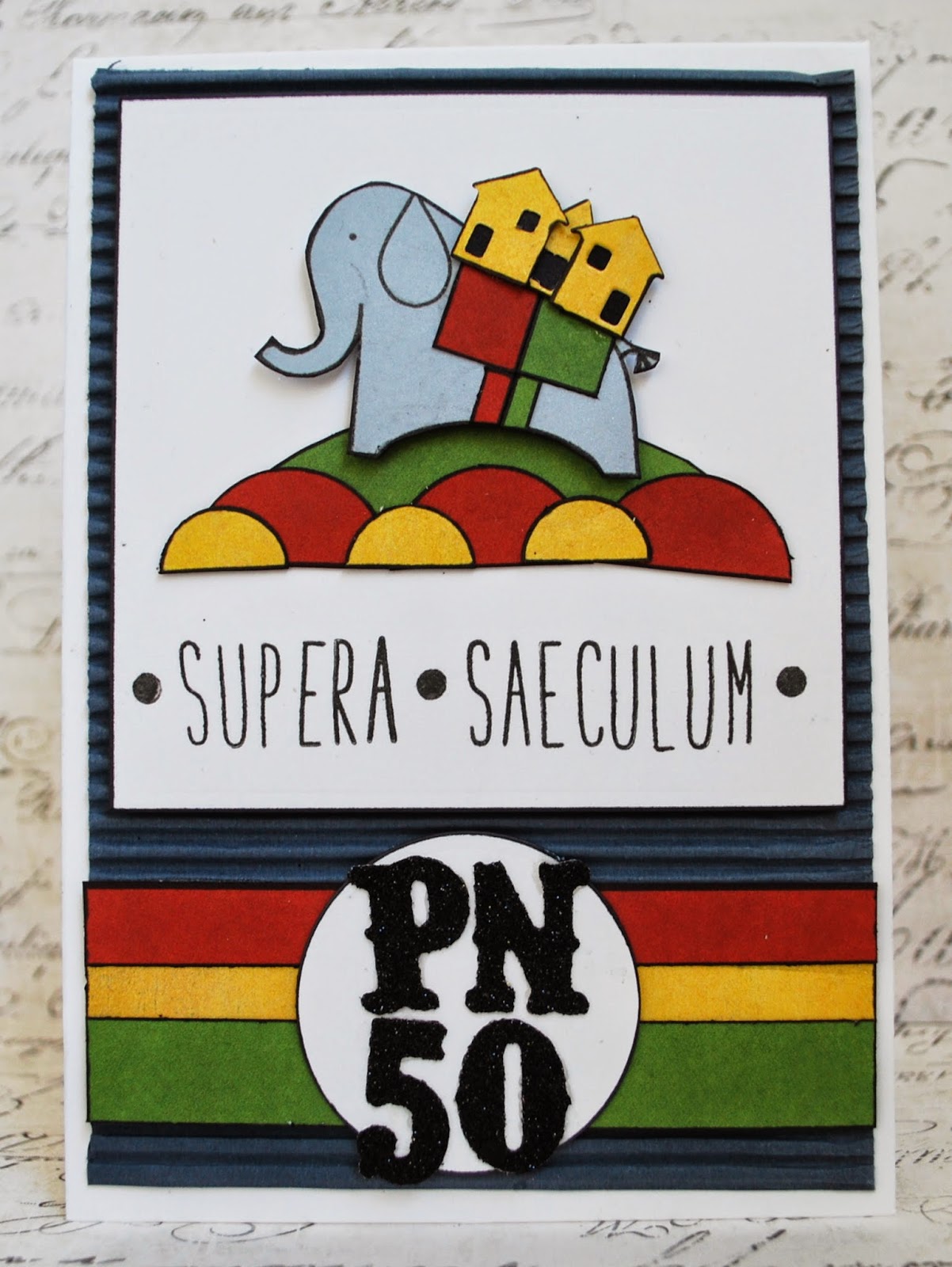 I used little Memory Box dies to make the castle. The elephant is a PTI stamp. I have these fab Lawn Fawn Milo alpha stamps where you can stamp the whole word at once. Bolton's motto is "Supera Moras" - overcome delays but I canged it to "Supera Saeculum" - overcome old age. Some black glitter letters approximated the Bolton Wanderers main logo.
He had spotted me printing up a photo of the elephant so it wasn't a huge surprise today but I think he liked it!

and finally to catch up (I was missing from DCM for 3 weeks as well!) - flags
This one was my choice as I thought flags could be inspirational in all sorts of ways. I went for the look of Japan 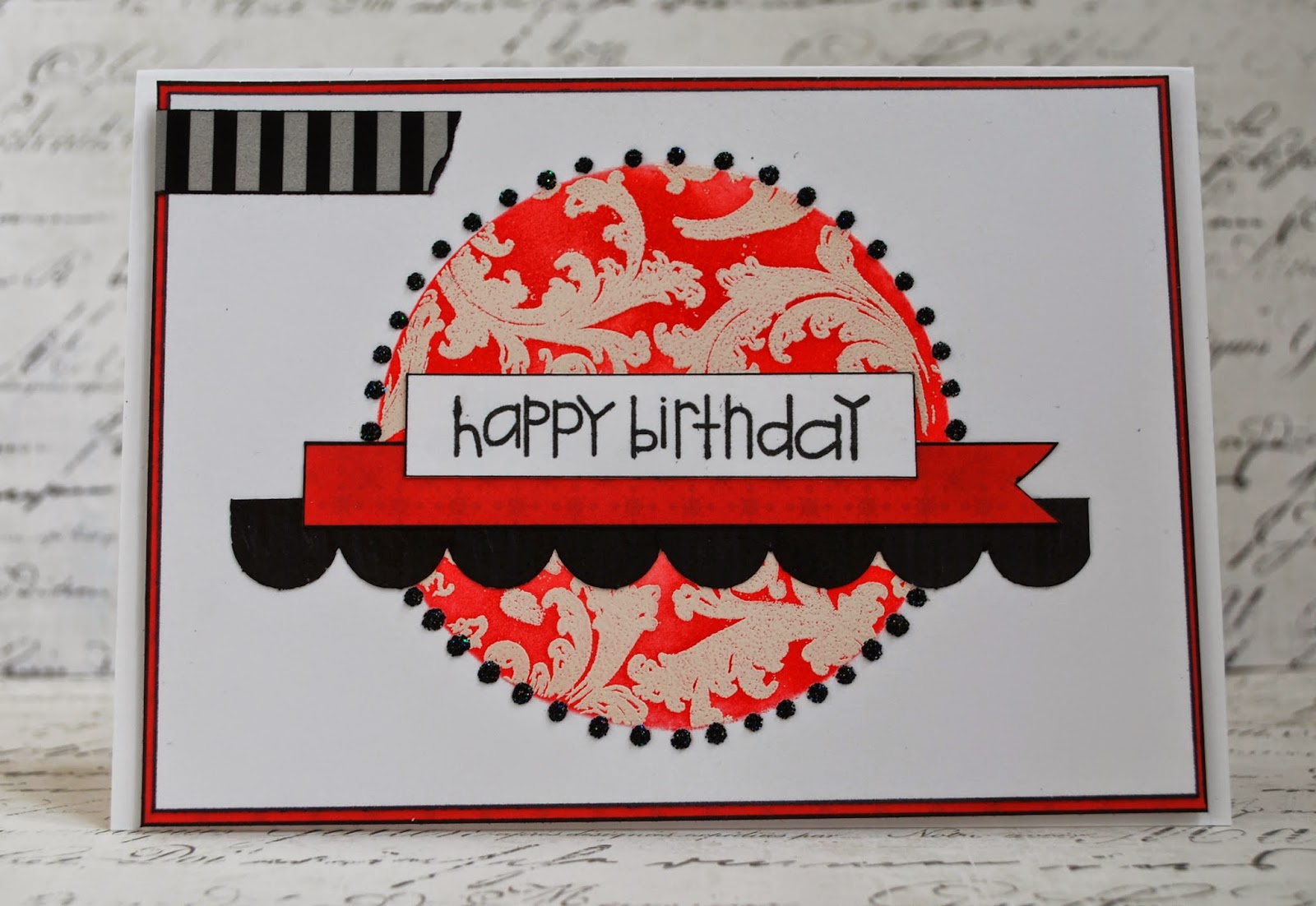 I made a stencil that I could stamp and emboss a large backround stamp through using white embossing powder. I then added various red Distress Inks and buffed it up. Some strips of Kaisercraft paper, my favourite birthday sentiment (Paper Smooches) and some black Stickles and it was done 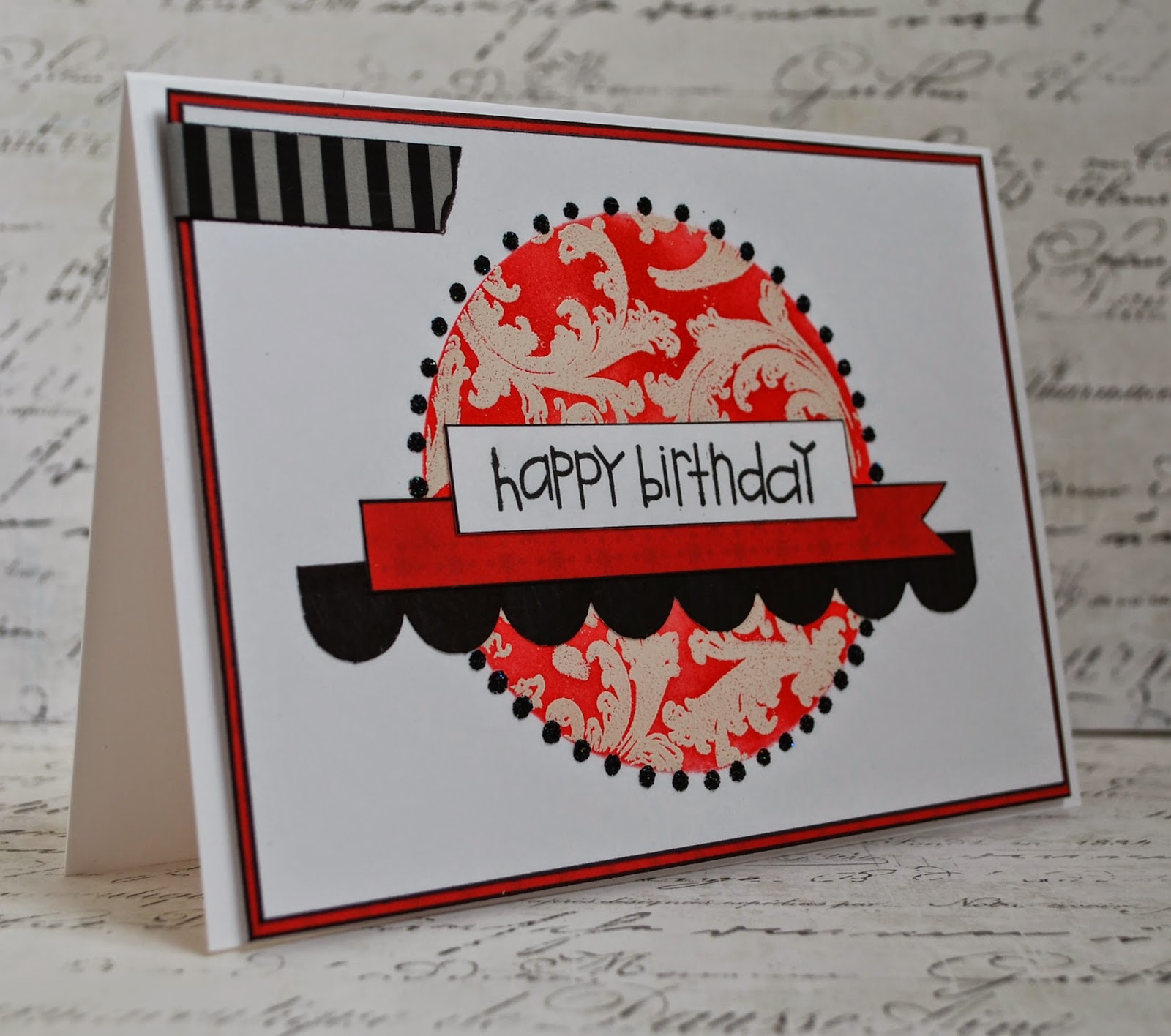 That'll do for today. Hope to be back again sooner than I was this time :)
Posted by Lythan at 1:05 pm

Well, I came by because I love your feathers card! I hope you salvaged some more of that background because it looks fab here, really vibrant and arty! Very original take on the football dare and your Japnese flag-inspired card is very stylish, too.