I have rather slowed up on the old blogging - I am never in when the Daring Cardmaker challenge is posted and then rather forget as time goes by. And May was my bloggerversary and everything (9 years blogging now!)

Ah well. I can only do what I can do. (V. philosophical)
So lets have a crafty catch up again shall we?

Two weeks ago the Daring theme was Science Fiction. Svenja wanted us to portray an sci-fi hero of our choice. I didn't read that properly and just went for a sci fi sort of vibe. I'm not sure what I would have done if I had read it properly but the rest of the team filled the brief with some AWESOME cards. 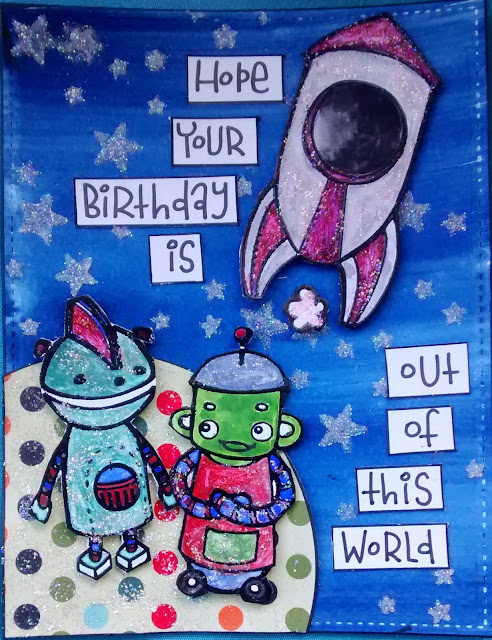 I dug out my old Purple Onion space people/rocket stamps. They are a bit Futurarma-y aren't they? I coloured them with watercolour paints (the awesome kuretake gansai tambi set) and while they were drying I cut out a rectangle of watercolour paper and added a dark blue wash over it. I took a Heidi Swapp stencil and some diamond glitter embossing paste to create stars. I cut out a spotty planet but looked a bit dull so spread some of the paste on that as well. I loved the shimmer so gave my aliens and rocket the same treatment. 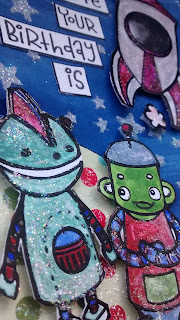 and popped them up with foam pads. The only thing left to do was a hand written sentiment.

My middle son was 21 during that week. He was still at Uni and it is too far to nip in to say hello, plus he was still in the middle of the presentations for his finals. Instead we sent him a fruit cake through the post with a pic of a teddy bear with balloons  - one of those you can write your own greeting on and will go through a letter box. Cool eh? (Don't have a photo of that yet)
And this card 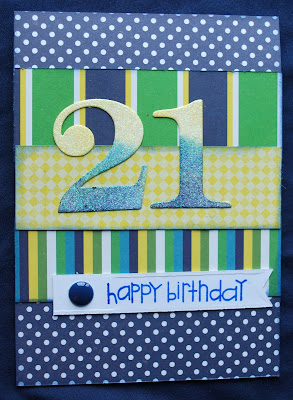 The glittery letters were given an ombre ink treatment that I rather like... I used papers from an old MME pad

This week's Daring Card also featured glitter. I do love glitter.
It was a bit of a challenge. Sharon asked us to try out the Mirror Mirror technique - mirror stamping, mirror die-cuts or patterned papers featuring a mirror image.
I went for mirror stamping - why? I am not the best stamper in the world. But I had finally got my hands on those cute Unforgettable stamps from WPlus9 so had to try. I stamped the image onto some vellum and then placed the vellum on cardstock, tracing over the inked area with a pencil. It was still quite faint but enough to go over with a black pen 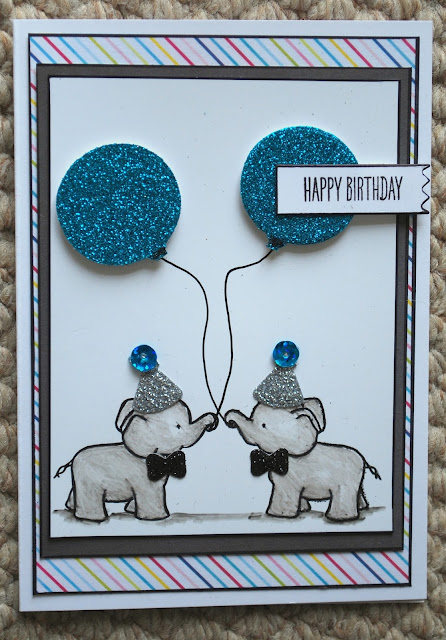 I used prismacolour pencils - not totally successful to colour my little grey friends and then cut out party hats, balloons and bow ties with the matching dies to the stamp set. The paper is from the Doodlebug Sunkissed paper pad. The glitter card is from Craft Creations.

Lets see if June is a more blogably productive month!