ok so you have to be as old as me to get the reference and if you did have this invisible 'daring cardmakers'(DARING CARDMAKERS!) pencil as your prize. In a minute we will play the game with the cabbages.
(McClain? Yes I had a bath this morning!)

If you are not old enough to understand what I am talking about you have my sympathy. Friday nights without that kids tv show. Happy days.

I think I am still recovering from having to travel in and out of London yesterday. How people do it every day I do not know. I missed most of the breakdowns on the tube but made the mistake at the end of wating for the bus. It is quicker to walk home and only takes 15 minutes. I was tired so I waited. Which meant I got home cold and tired instead of fit and tired. Remind me next time eh? Still the meeting I went to was worthwhile so that is good. I am a Borough Dean you know. Sounds impressive doesn't it. Well it had to be either Phil or me as we are the only URC Ministers in the Borough. I won the wrestling match though I have always been suspicious that he let me.... I am now determined to make something of the post so we'll see.

But what you really want to know about is the cards for men using ribbon eh? The ribbons are 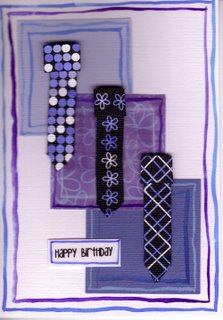 from a Shoebox Trims kit (the kit is no more but I do have a lot of ribbons now...) The wavy paint lines (I meant to do them like that you know. Its Arty) were done with some dye paints from Artvango. It's a lovely little palette like watercolour but yer actual dye which makes for vibrant colour. The middle square is a Junkitz Squarez which I shouldn't have bought as I have an aversion to z's and k's instead of 's's and 'c's. Its not arty, its not funky, its bad English. (panicking about my use of "its" now though...), the other two are Bazzill.

This card came about because the Daring C's had an extra internal dare to use pink ribbon on a card. So I went for it! Apart from the white ribbon underneath, the other ribbons were this month's free gift from Scrapbook Inspirations and they are lush!The paper as I'm sure you know is BG Lolipoppe Shoppppppe (Don't like extra letters in words to make it oldy worldy either) The 'r' is a Heidi Swapp chipboard letter with extra pink spots and the 'think pink' label is from Ms Swapp too.

This was a simple quickie. Using October Self Adressed paper, a bit of Bazzill, 4 bazzill brads, grosgrain ribbon, letters from QVC kit, 1 from Doodlebug. flower one of Auntie Sarah's (who is expecting twins which is really exciting!) (and is the home of the Heidi Swapp chipboard which I find almost as exciting...)

In a moment of weakness this week I ordered some stuff from A Trip Down Memory Lane. They have these Christina Cole epoxy stickers which match the paper (which i have of course) and a few other bits - like the doodlebug letters and the small BG letters to go with Lily Kate and Gypsy fell in too. well delivery was super speedy and I got a handwritten note and some extra ribbons as a thank you. So thank you ATDML!

OK cannot put off the service this week any longer. The readings are all about doom, death and destruction. Anyone got any ideas for what to say to the kids?
Posted by Lythan at 9:29 am

Wow you've been bust Lythan, i love your cards, thanks for visiting my blog

Doom, death and destruction... how about "Always look on the bright side of life, dee-do, de-doo-di-do-di-do..."

Loved what you did with the ribbons in the first card & the jukitz squares !

very imaginative cards there Lythan- you are so clever. And your blog does make a big grin grow on my face !

Hi Lythan,
Just loved the little tie's so cute... I would never have thought of that...
all of your cards are lovely well done...
TTFN Gillian :o)

I've just sat and chuckled all the way through this blog entry. Great cards, of course, big gold star for getting so much pink in there - is that one going to be for Phil's birthday, I wonder....

And isn't Borough Dean a football club? If it isn't then it should be.

Brill cards Lythan - I really need extra hours in my day to just get started!