I won't be blogging for a while so I'm just here to say goodbye!
And to share a last few layouts. I've been a scrapping fool recently. I think I'm ready for a bit more card making now. Which is just as well as I have a Church Fair and Christmas cards on the horizon. I will just moan a tad and say that I would actually like to see some more traditional Christmas colours please. I have decided to do stamped Nativity cards this year and they just won't go with the bright colours I have seen so far. Still I suppose it is only August and usually I don't start thinking about these things til late November.

The pictures aren't great as I took the photos last night. Both lots should have a white background! 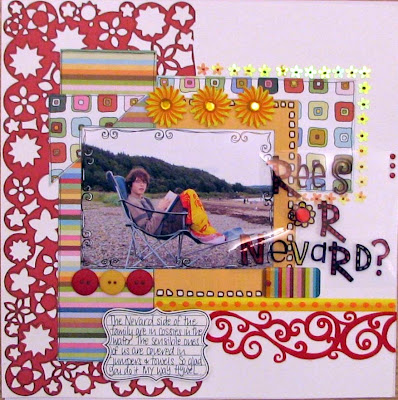 I made it even harder to photograph this by putting my title on acetate. Ever since I did the doodling class for Imagine That and bought a doodling book I have been going mad for it!
This was my attempt to go for a more layered style. I love that look. Still needs more work though.
I used KI memories papers, Queen and Co felt, a stamp that I can't remember the make of, some Scenic Route buttons and some Poundland trimmings (only the best eh?) Rees or Nevard was handwritten copying some Penny Black stamps. The font is actually Rebekah's Birthday if you wanted to print it on something or try copying it for yourself. Its v. easy!

The next layout took me hours! But I am so proud of finally cracking a double layout that goes across two pages 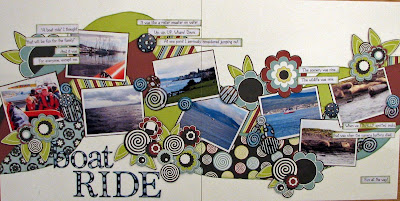 Some of the time was taken up triple embossing loads of chipboard which I then decided looked better with doodles. This is because chose the colour of the embossing powder and THEN chose the paper which wasn't a great match. The paper is 3 Bugs in a rug, from a Scrummy Stash Cafe kit I bought and have never used because I like the paper too much. The papers are double sided and I layered them into a wave shape and cut out elements too. I doodled on buttons, chipboard and acetate and then sprinkled my journalling over the top. Click on it for a closer look.
And when I say I actually thought about throwing myself off just to make the torture stop I was not kidding. Obviously there are no pictures of the waves being really choppy and the boat going UP and DOWN because I was clinging on for dear life at that stage.

Right I am away for some more family adventures. Ciao baby!
Posted by Lythan at 9:16 am

Great LO's as usual, I feel queasy just reading about your boat ride! Have a great holiday xx

I love your boat ride layout Lythan - possible my favourite out of all the LOs I've ever seen. The white round the outsides makes it look stunning.

Have a great holiday.

Both fabulous layouts Lythan. I love the title on the first one, but i also love multi-photo layouts! :)

You've been a busy scrapper - fab LOs. Hope you have a wonderful time away.

Lythan, I have named your blog Featured Blog of the Week over at A Faith Perspective---www.afaithperspective.blogspot.com I love all the wonderful art that you have on you site- thanks for sharing it!! If you could drop me a note at ahouse@scrapbooknewsandreview.com I have a blinkie you can wear on your blog. Thanks!

Just wanted to drop by and let you know that I love your work - truely inspiring - thanking Faith Perspective for sharing it with us. Definately a blog I will be revisiting.

love your layouts Lythan !
these are gorgeous !

I will never forget the layout you once did for a competition - you - covered in scrap paper - i thought it was the best !!!! Unforgetable obviously !!!