Yay! I am finally done with the holiday 2007 album with these two layouts!
Next to do will be the holiday with the choir - last October. I'm going to make a large mini book for that (if that makes sense) , so it will be photos and simple notes rather than full pages.
The photos of these layouts are appalling - I am rather embarrassed but don't really have time to redo them. So just imagine these are square and in focus... 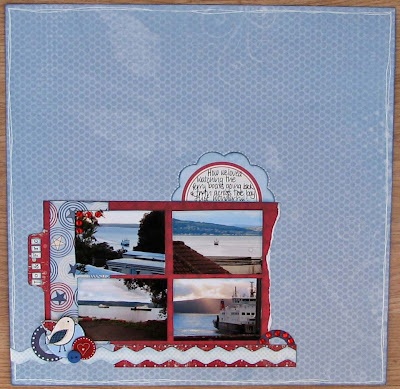 This layout is called "to and fro". Its a teeny title - I am just showing off that I have finally got my hands on some MM teeny alphas. The papers are mostly Scenic Route Liberty. It may have been made for US July 4th celebrations but I have loved using it. There are some stickers in there from an old Self Addressed kit, a Hero Arts stamp, some bits from a QVC card and scrap set I bought ooh 3 years ago?, a few doodles and lots of space to let the photos sing. 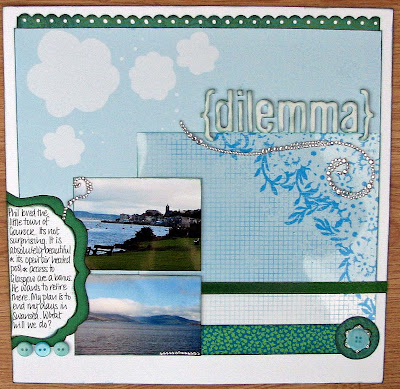 this looks far better in real life - but was a disaster at one point. See unbeknownst to me, I had some black in k on the side of one of my fingers. So I couldn't see it until I had made a big black mark both on the side of the layout - which was going to be a white border - and in the middle of the Dream Street cloud paper. So I really had no choice about where to place the photos. I decided to make a half label journalling spot tracing a Technique Tuesday tile. It was all looking a little stark, but I think a Katie Pertiet overlay printed onto a transparency managed to soften it up a bit. I did a lot of inking with blue and green distress inks - including the thickers which really do look better than they photographed (do I keep saying that?) I also added some Scenic Route Grafton paper, a little bit of fabric paper (the blue/green strip) a few buttons and some Fancy Pants (I think) bling bits. Oh and a little green ribbon.

I'm like a bear with a sore head today. Either I have had a personality transplant or its PMT. I do hope its the latter. Otherwise we will be spending our retirement in different countries. Here's hoping I wake up a nicer person in the morning!
Posted by Lythan at 10:57 pm

Would never have guessed things were arranged to cover smudge marks! Perfect LOs (and nothing wrong with the photos either). Hope you wake up more like your old self in the morning.

Well done on finishing you holiday album Lythan. It must be time to start on the 2008 holiday one now!

Great LO’s and I can’t see anything wrong with your photos.

Hope you are feeling better :)Nothing wrong with the piccies at all and they layouts are fabbylicious (as usual). Also finally got a copy of the Docrafts mag and really love your makes in there :)

These layouts are fantabulous Lythan! The piccies look fine and dandy to me hun.

You have inspired me to start scrapping again once my hand is better :o)

I love how `accidents' can turn out so well, maybe they weren't an accident after all! Love those layouts!

These are wonderful, Lythan - I love the blue and red of the first and the soft aqua and green of the second. Fab photos and as always your journalling looks amazing - you are such a clever bunny - hope things have calmed donw by now {hugs}