I'd just like everyone to know that the reason number 2 son went to school in his uniform for jeans for Genes day is not because his mother forgot to pay the in advance money nor because his loving mother forgot that it was jeans day but because said child decided that he would rather wear uniform than anything else.
I'm still shaking my head in amazement.

Today is DCM day and we had a fabulous theme set by Keryn
Scallops!
I was about to make this card last week until I realised it was crowns and I'm so glad they were in this order as last week I didn't have the ubiquitous threading water punch that is my new best friend.

Yesterday Phil and I were invited to a fund raiser by one of his church members - she is in her eighties and gave a poetry recital at her house in aid of Pact (parents of autistic children together) She was just about able to recite 10 long poems from memory which was quite something. So we needed to make a thank you card, hence this one... 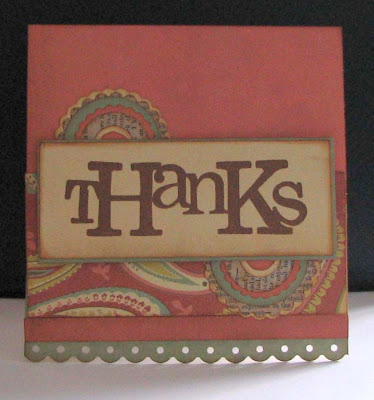 I managed to make it more tricky than it should have been by creating the green scallop strip first, then deciding on the size of card then having to cut the card down the sides a bit. The papers are We R Memory Keepers Vintage Brass ones. The colours are so rich, the photo doesn't really do them justice. I used a Heidi Swapp stamp - its big so you need a big card! I wanted a bit more scallop so made a layered flower using punches and nestabilities. It didn't look right at first so I cut it in half and I think it works better.

Faith scrapping last night went well - people are disappointed it is finishing next week. I have to admit though a part of me is relieved as it is quite hard work - both preparing and trying to help people along. Something funny happened last night actually. Someone had begun an A4 layout by glueing a patterned piece onto some card. She left the table to look for something and it had disappeared. 10 minutes later we still couldn't find it. Until we noticed that someone on the same table had used a small piece of the same patterned paper to frame a photo. Apparently somehow the paper had got separated from the card... There was a very red face and lots of hilarity when we worked it out!

Well I must get on with work as I have two services on Sunday and it is also card club on Saturday which works better if I have samples to share...
Posted by Lythan at 9:38 am

Fab card Lythan - but why aren't you cutting your scallops with your Robo? Bad girl!

I've not had those fab papers out for a while - thanks for the reminder about how lovely they are. I love the way you've used them on this card.

Gorgeous card Lythan :) The threading water punch is fab! But I'd better start using my robo too!!

Love the card Lythan.......this dare was very apt for me, I stick scallops on allsorts at the mo :)

Gorgous card Lythan. So simple yet so effective! I love it! Pascale :@)

What an achievement for the lady to have remembered all ten poems…..I know for a fact that I would have been hard pushed to remember just one!
It’s a beautiful card that you made for her and I bet she loved it. The papers are lovely and the scallops, made with your new punch look absolutely fantastic.

By the way, thanks for your comment on my blog…..I will truly miss dancing the Tango. Lol!!