First I'd like to say a big thank you for all the comments on my last post. It really means a lot to me! I'll be going with the crowns as it is a "me" kind of design. I don't mind doing loads the same as long as the same is slightly different! (Using different papers on each one). I can use the other images at the church card club on Saturday.

I had a happy Saturday as well as happy Monday. Sue and I went to Alexandra Palace for the stamp and scrap show. It was more the stamp and stamp show as the range of scrap stuff was a tad disappointing. That doesn't mean I didn't buy things though!
I bought a fair few stamps, a threading water punch and some Scenic Route that I don't have. I'm slowly building up my collection as the old ones haven't dated in my opinion! I bought some Hambly - it is so expensive I am going to have to think about how to use the sheet as I don't know if I want it as a background transparency or at the front in pieces. Fun decision though! We met some of the Just Bex girls but it was the shortest meet ever - there was going to be a longer one at tea time but I got carried away and forgot the time for which I am tres embarrassed.

Monday Phil and i had planned a day in London until 2 kids announced they had a day off school. SO instead three of us went for a long walk with Lucky who wanted to show off her new neckwear. 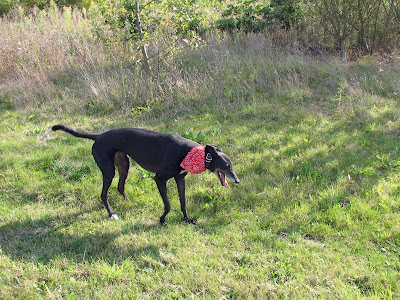 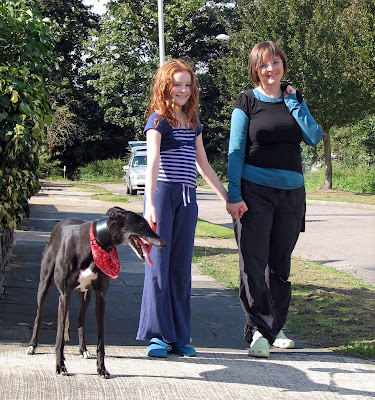 Later in the day I did some card making and scrapping (can't show the cards yet as one of the recipients reads the blog). As a family we watched I, Robot which we had recorded on the tv hard drive. Movie Night doesn't work when there are 5 Mondays in the month as we only get two films per month from Tesco film. Phil and I had watched it without the kids before but it was ok to see again - if for nothing more than the line "whoever heard of a 12 year old girl who wants to be a dentist" which Carys (the 12 year old would be dentist) found hysterically funny.

Here are the layouts 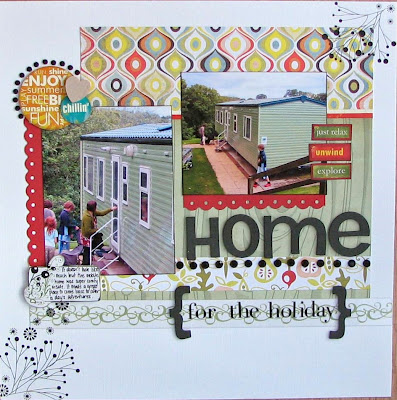 I am trying hard to mix up my scrap company products. Here is a mix of Basic Grey Offbeat and Cosmo Cricket Mr Campy papers, Bazzill cardstock, Scenic Route grafton stickers, BG rub ons, American Crafts thickers and rubons and journal tag. My new threading water punch got its first airing and the black bling is stick on bought at Ally Pally too. There is also a see through thick acetate strip that came from an old Self Addressed kit as did the little wooden heart. 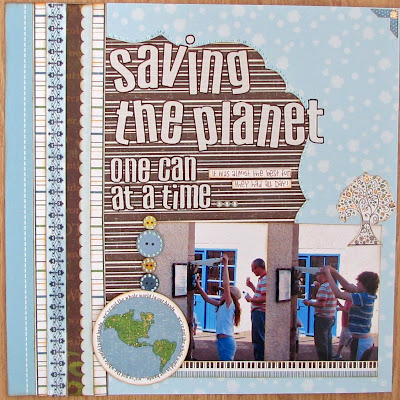 This layout I was going to do while I watched the film but it proved a bit challenging!
The Dream Street paper that I chose as a background came with the blue strip that you see down the left hand side. And I could not work out how to get a balance with everything else. So I had to just stare at it for a few hours and after the film it came right. It didn't help that I traced the label shape from a Technique Tuesday tile and managed to make it asymmetrical (took an hour to work that out). I made it smaller and that helped!
Other papers are Heidi Grace, Pink Martini and another part of that SA kit acrylic strip plus some stickers from another old kit. When I started with Self Addressed I just made cards so it is nice discovering all the little bits that go well with Scrapbooking now! I added some buttons and American Crafts letter stickers. I think they look so much better if you outline them - as I have with a brown Sharpie pen!
If you click on the layout you should be able to see how mad I went with Liquid Pearls and stickles at the end!
We have one of these can crushers at home but it doesn't seem to hold the same appeal as this one did on holiday...
Posted by Lythan at 4:02 pm

The LOs are fab Lythan, love the colours you've used and the mix of papers too 0 well done on ,ixing the ranges - it takes eo flippin' long to do though, doesn't it?

Lovely mix of papers and everything else used to make smashing LOs - and all the liquid pearls are such a lovely addition - such patience! (and the brown Sharpie)