Had one of the worst times of my life on Tuesday...

Hywel started sixth form college. He is going to one in the neighbouring educational authority - about 20-25 minutes drive from here. It is more like a school sixth form, which we liked. There is a special bus to take him and drop him off. He got the bus no problem. But didn't arrive home at 5 as expected. Phil had a phone call at 5:30 to say there was a problem with the bus and would he pick Hywel up from reception.

I arrived home at 5:45 and seeing no Phil's car and no Hywel, wondered if there had been a problem. Didn't really worry until later when Phil phoned to ask if I had heard from Hywel as he wasn't at Reception. This is the Hywel with no phone and no money who didn't really know anyone at the new place. Some very, very, scary time passed with Phil phoning back to say he had searched the campus and thought it best to just come home. About 6:55 the phone rang again - Hywel asking why no-one had come for him, he was at Reception.

Now there are TWO colleges that take sixth formers in Grays. H was at the Reception of the other one and for some reason that message hadn't got to Phil. So H finally got home at 7:35. I had passed poor Phil almost home and out of his mind with worry but he didn't recognise my car!
H IS 16 and sensible, but we all felt so vulnerable on Tuesday night. H now has a mobile phone...
My heart goes out to all the families whose children are missing - it is an awful, awful thing to deal with. Thank God ours was just an admin mix up with buses and messages!

Phil and I then had a better night as we had tickets for the theatre. We weren't sure whether to go but as we had paid for them - we went! We saw September in the Rain by John Godber. It was a 2 hander - the actors were good but to be honest they were outdone by the fabulous staging. I was tempted to walk off with one of the seaside postcard figures but Phil wouldn't let me! Our local theatre has a sign up for three plays deal which we have never done before but it is a good way of having a night out together as it is in the diary all ready. Next one is Noel Coward. I love a bit of Noel I do.

Since Tuesday there have been some best of times to make up for the scare!
1: Em's Sats results finally arrived and he did v. well
2: Emma at Imagine That liked the samples I made even though I thought I had messed up :)
I am going to do more doodling classes - this time with a layout rather than cards. there will be several different classes over the next year so that people can get to grips with doodling!
I got to play with the most fab Daisy Bucket designs from the Perfect Harmony range - see them all here
It is a shame that you can't feel them as they have a great texture! 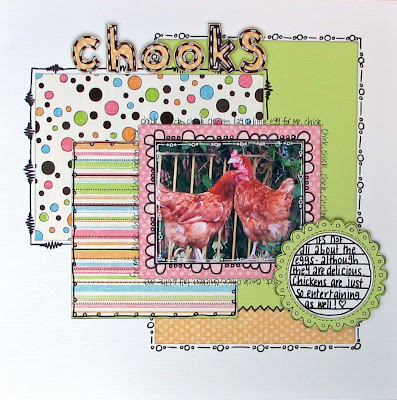 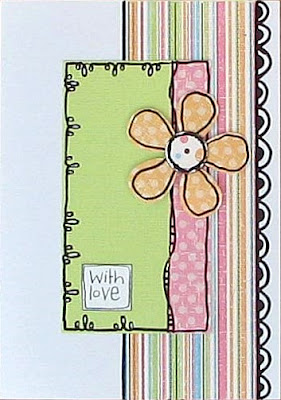 3: DoCrafts Creativity 11 is out and there is some stuff I have made in there. I am apparently an "experienced" crafter. Does that mean old or talented?
4: It is Salt day today. I missed the last one due to hols and it was my turn to chose the theme again. So I went for...
He knows us inside and out - Psalm 139
This Psalm is quite challenging in parts but there is plenty to reflect on as well. Sometimes it is so comforting, sometimes a bit scary to think that God knows us so well. What does the idea that He knows us inside and out mean to you? 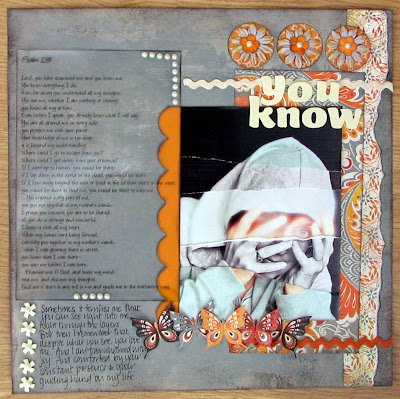 I have a book called Focal Point and I remembered this effective way of doing photos. I used three layers - a brightened transparency, black and white and colour photos and ripped and stuck them together. I used some wonderful new Basic Grey papers from Imagine That coupled with sticky pearls and an orange Bazzill edger - it was so much easier than hand cutting scallops! I did hand cut the butterflies - I think they are my favouite part of the layout

I also added some prima flowers and the Psalm printed on acetate.
As ever I am blown away by the work of the rest of the team - do go and have a look.

I hope your life is filled with more best of times than worst of times. But if you would like to know someone is praying for you when times are hard then let me know and I will add you to my list.
Posted by Lythan at 3:53 pm

What a worrying experience that was on Tuesday, but so good that Hywel was safe and it was just a mix up. Your LO for the Salt challenge is spot on - and I, too, love the butterflies. I love your doodling - wish I could come to your classes.

Oh I was worried about Hywel when I was reading your post. You must have been beside yourself. I am so glad everything worked out OK in the end. I adore your layout. The photograph is wonderful. As ever I am in awe of your doodling ability..I wish I could attend your classes as well, instead I'll just have to look at your work and keep practicing.
Anice xx

Such a beautiful layout Lythan! I love the affect of your photo and the color pop of the butterflies, really stunning! And a wonderful study, I really enjoyed it!

Wow. this is stunning Lythan. I love the butterflies
lis x

Beautiful LO's and card. Your doodling is great. x

I am putting you on today... on this post you mention a book called Focal point? Can you tell me a little more about it..

Thanks..
Jo (from Inspirational)