You may have seen Posh's new hairstyle. I think I was the inspiration.
See, I had that hairstyle in 1968.
Only having less curves (being 3) (and not surgically enhanced) (not saying she is mind) (just in case her lawyers read this blog) (yeah, right)
everyone thought I was a boy. Even Carys when she saw these pics 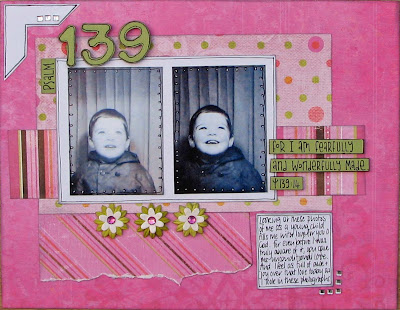 Yes, this is a second layout based on the last Salt theme. At church we began a 4 week Bible study/scrap class and I piggy backed on Salt (as it were). I wanted something simpler than my peeled photo layout to show them. My idea was that I would take people through step by step to create something that looked similar - only with their choice of paper.
But the United Reformed Church is not called Nonconformist for nothing...
"No, I want to do an A4 layout." "I'm going to add hearts to mine" "Ooh good idea - have you brought a heart punch"
All good fun actually but next week I am not going to take all day preparing a how to. We will go for basic technique and free for all....
BTW the photos are originally 4 on a strip. These two were the best preserved so I blew them up a bit. I used some MME paper from a stack that I was given as a present. White card, Bazzill (love that green) a few Auntie Sarah's bloomers (now out of those fab green ones. Can you tell the sort of green I like? Wait til you see the next layout) cheapo bling and some doodles. 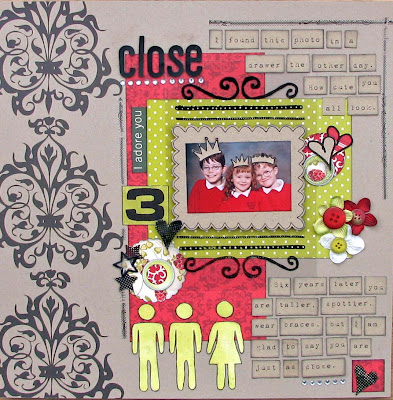 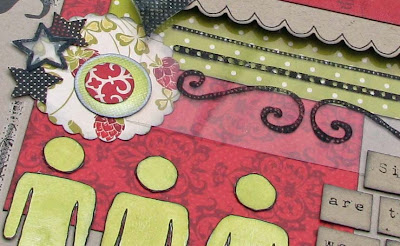 She makes it look easy. I have a lot to learn.

Last but not least is what i hope is card 1 for this weeks DCM dare. I say that as I have another card half done that will fit the brief so much better. Not sure I will have a chance to play until Monday though so this will have to tide me over.
The dare was set by Tracie
This week's theme is All Mixed Up.
How come the majority of girls' cards are pink and flowery and the boys are blue and have absolutely no flowers at all?
What about cars for girls??? hmmm?
This week Tracie wants you to mix up those genders and create cards with a little bit of something not normally found for that sex.
I went for a masculine flower card. I have these rather wonderful black and white flower stickers that I really must crack on with using. They make rather dramatic and simple cards I think. 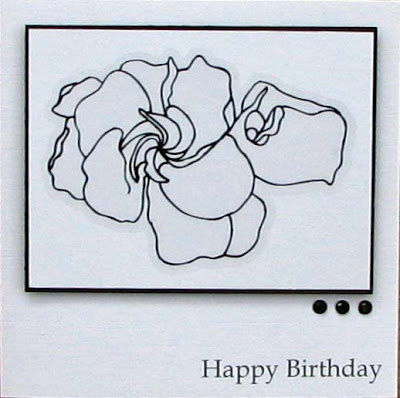 The card is really bright white but I can't get that colour right on the 'puter. I mounted the white card on black and raised it on foam pads, stuck it on a preprinted square card blank and added 3 black blings as even men need bling.

Hope your weekend is fun whether it is full of play or full of work (like mine :( )
Posted by Lythan at 12:21 pm

Lovely to see another LO for the psalm - what wonderful piccies of you! The card for DCM works really well, including the black bling.

Your Close LO is just fab-tastic, I think you do the layered thing rather well, actually!

Love the scrapbook pages! I think the colour combos is fab.

I'm pleased to hear Lythan that your Bible Study/Scrap class when to plan. Lol!

Two beautiful Lo's there with equally beautiful photos and there's nothing what so ever wrong with your layering, it's perfect.

I'm loving the simple lines of your card too.....it wasn't an easy dare to tackle this week, was it?