Say it ain't so

Phil and I began catching up with Lost in Austen last night. What a fab programme.
EXCEPT that Mrs Bennet was played by Alex Kingston. I screamed in protest.
Not because of Alex' acting - she is fab. But because she is only a year older than me.
I can't be old enough to play Mrs Bennet can I?
Oh I suppose I just about can.
Sulk.
I know about Alex Kingston's age because for three years we went to the same school - Rosebery - until I moved to Wales. We did drama productions together - not chums as she was in the year above me - but knew each other. And so I followed her career - from a photo strip in My Guy (ooh remember those?) to being a bully in Grange Hill, marrying Dr Greene in ER and hinting at a relationship with Dr Who in the last series (almost went off her then!). But old enough to play the mother of the heroines of P and P? Say it isn't so!

I consoled myself with making my card for this week's dare on DCM
Kathy chose a dare that we really had to think about
Same but different
see what happens when our starting point is the same quotation:
Use what talents you possess: the woods would be very silent if no birds sang there except those that sang best.
Henry Van Dyke
I found it hard to start with until I decided that it out to be a card of encouragement based on the words of the quote and plumped for putting the quote on the inside. After that it was straightforward really.

I delved into my Maya Road box of trees and branches chipboard and found some birdies too! So birds and tree were covered with Basic Grey Mellow papers. The branch was too until it went horribly wrong so that was peeled off and the grey chipboard was covered in distress ink instead... 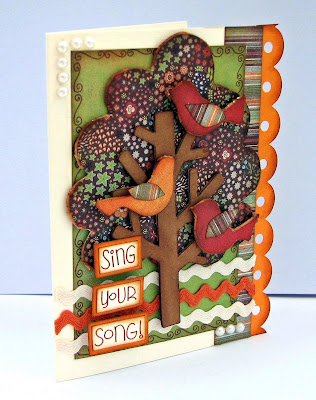 I added some of the same features as yesterday's layout (as they were still on my desk...) - ricrac, a Bazzill edge and self adhesive pearls. It is a really layered card... 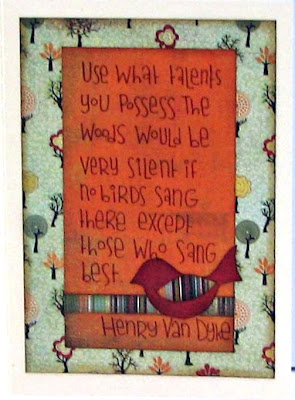 I also drew round another bird and cut it out. Its so cute I shall have to keep one and do that again!

Hywel has managed to get back safely the last two days although I am always really, really, glad to see him arrive home. He has a lot of free time today as well as a long bus jounrey so has taken two large books to read just in case!

My weekend is mostly work but I am hoping to fit some exercise in too. Did well yesterday - none today as yet! And I'm looking forward to seeing my DCM teamie Sue on Monday for some chat and even a little crafting. Have a good weekend!
Posted by Lythan at 12:52 pm

Love the Maya Road chipboard and the way you've used it. Lovely card of encouragment.

I REALLY love your card Lythan, those are some of my fave papers currently, and I love what you've done with them. I'm a fan of the Maya Road trees, I've used them on a couple of LO's but for some reason it hasn't occurred to me to use them on cards, so I may have to lift that one, please! :)

Fantastic! Love how you 'condensed' the quote for the card front and all the layers and little details look fab!

What a fabulous card! I just love looking at it!

What a fabulous card! I just love looking at it!

Love the dimensionality of your card & the colours. Perfect xx

This is the Mary Poppins of cards Lythan! "practically perfect in every way!" I adore it...the colours, the chipboard....everything! I think I need some chipboard shapes!! Stunning it is!

Love your card, the chipboard looks great as does the backing paper!
Clairex

PS. I’m hooked on Lost in Austin too and be assured, you look far too young to play Mrs. Benne, so stop worrying

I love this card Lythan. I love your use of the bold colours and chipboard.
I also think you are fast becoming the doodling queen :) I wish I could do it more but am always wary of mucking it up (I think I could do with one of your classes ;))

I adore this card - the papers are gorgeous and you've put it all together beautifully. :)

Your card is fantastic - I'm so thrilled at the way you all rose to this challenge. I didn't realise how hard it was until I started (or tried to) male my own!

Fabulous card. Love the chipboard use. Just popped by to say thanks for your comments on my entry - glad I made you titter.
SHaron