That's me!
Last night Hywel had to go back to his old school to receive three awards. ICT Achievement, GSCE Excellence and the much coveted Library prize (family joke. H and his mates all helped out in the library for their 5 years at school. It was a way of keeping out of the line of sight of those who thought them just to nerdy to exist. Every year one of them would get the prize and it was never H. I like to think they saved the best til last. The librarian has said that she misses him!)

It was for this that H had to have a suit. He is still quite small - about 5' 8 I reckon and stick thin, so I was surprised that it was so easy to get one that just about fits. I think he looks quite smart in a long haired geeky kind of way! 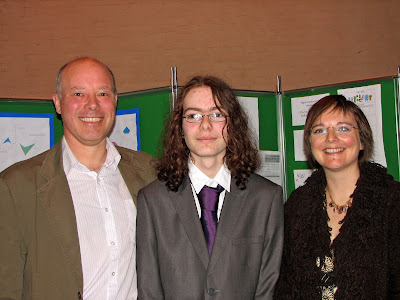 We are standing in front of his English coursework. He got the second highest score, losing out to his "rival" NW who was at primary school with him. (for many years in the Juniors they were secret loves. She is really nice and clever and pretty so I would be happy for the love to continue. H would not. She did get more prizes than he did but he claims it doesn't bother him. I suppose 16 is a bit young to settle down. She goes to a different sixth form anyway. So I better stop looking at hats)
And here he is at home in full length glory. I'm so proud of him!

I blame Sue who chose the theme because she heard the song on the radio.
Forever Autumn.
make a card that depicts Autumn.
It can be an Autumn scene or it can be something completely different but using a palette of Autumn colours……the choice is yours!

The trees along the M11 towards Cambridge are glorious at this time of year - makes the tedious journey there and back just a bit better. So I tried to get some rich autumn colours going 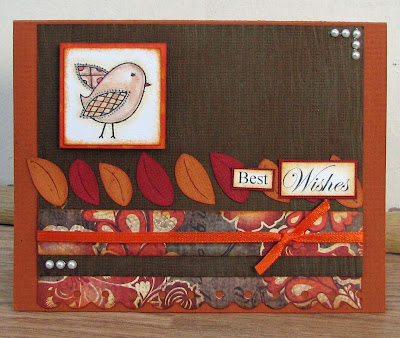 The papers and ribbon, including the card base are from an old Self Addressed kit. I took some brown Bazzill and ran it through the cuttlebug with a Fiskars tree bark plate. The effect is more subtle than an embossing folder - but it is also easier than trying to hand emboss with the plate!The hero arts birdie has been hanging round, coloured in on my desk for months so I slapped her on with a little extra inking round the edge. The leaves are QK - yes those dies again! I also used my threading water punch and stick on pearls. The greeting was done on the computer and inked to death.

This weekend is a little easier than the last one. And then it is half term and we are half on holiday (I have to go to Cambridge for an MA seminar on Tues.) So I hope I have time for crafting, sleeping and family. Perhaps not in that order!
Posted by Lythan at 9:58 am

Congratulations to your 'H' and to the proud parents of course : )
I love your autumn card Lythan.
The PP works so well with the card lis x

love the card Lythan and congratulations to H

Congratulations to H, you must be so proud he has done so well.
Love the beautiful colours you have used for your card, so warm.
Anice xx

Hywel has done so well Lythan; I’m not surprised that you’re a proud mum.
Doesn’t he look smart in his new suit!

I really love your card for this week dare.
The little birdie looks right at home there and the papers are so vibrant they just ‘shout’ Autumn.

(sorry about the singing!)

awww doesn't he look all grown up in his suit - and don't those parents look proud!!!! And it's right they should, too!

Love the card Lythan - that birdie is just so tweet

Great card for the challenge Lythan and I love the next card on the next post. Your church has some marvellous guests. Pascale :)

Hi, thanks for your lovely comment on my blog. I love your Autumn card....beautiful colours :)
Fiona

Congratulations to Hywel Lythan and you look so proud in the phot of you together :o)

Your card is superb as always and that little birdy stamp is divine!