is what I look like today, but I'm not really! Its just that two teams I am on have a reveal day today and my latest Docrafts layout went up as project of the week yesterday - and I did that one ages ago. However I have done more crafting than usual this week - strangely I have had no evening meetings at all. Result! But next week has "Do not add any more meetings in this week" written all over it which does not bode well. Make hay while the sun shines I think then!

Back to showing some things I made earlier...
For Docrafts I had to make a Christmas layout. As it happens we keep a Nativity set out all year as I love it so much so that became the focus of the layout (I kept the dust in on the shelves for a sense of reality...) I was sent some rather lovely papers to use - an A4 Linen paper pack and a gold embossed vellum pack. The papers are traditional deep red and green colours with a wonderful texture to them. I have used the plain side for writing on too as that has the texture as well. Now I have to be honest - I'm not really a traditional colours kind of person (Well, not much Christmassy at all as we all know) and it took a while for me to get into the groove but I am glad I persevered 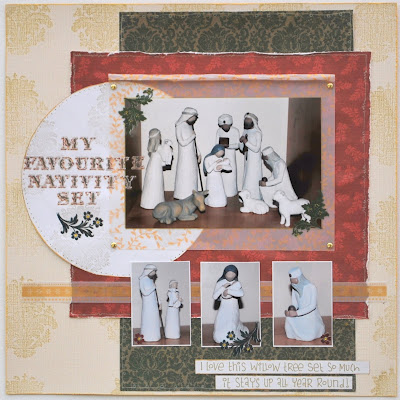 I was also sent a rubber stamp which i used freely to create a patterned backing paper from cardstock. The green and red papers have diluted Smooch inks sprayed over them which is quite hard to see. The layout is really very gold and glittery. There's a bit of distressing and rolling and rub on adding going on as well. And 4 photos. I am trying very hard not just to use one photo all the time. It's tough though...

Next up is the Get Funky challenge for October. Now it is clear that I will never be Miss Hallmark Cards 2009 because I don't really do Halloween either... I love the colours and the ghosties and stuff though and refuse to make it so that there is any time in which evil seems to have the upper hand over love so I am not one to frown over it either. Its just not been a big thing where we have been or that the kids have really wanted to join in with. (apart form one year and I have the photos to blackmail them with at a later date!)
Anyway all that lecturette is an introduction to the theme this month! Halloween.
And here is my offering 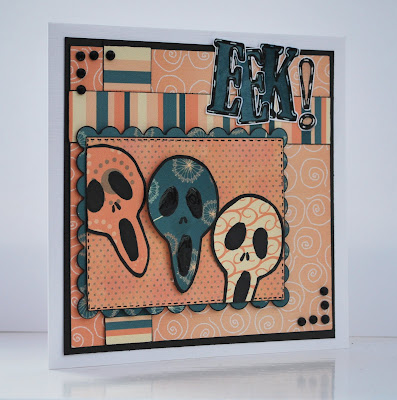 I used papers from the Now That's Funky CD. I was inspired by the ad for the Basic Grey Eerie collection to make the scary mask faces! I also used rectangle Nesties and Papermania gems. The middle skull has glossy accents on the eyes and mouth. I think I might add "I forgot your birthday" when I come to use the card. I love all the cards the team has come up with - check out Anice's labour of love on her card - and you can see how versatile all the cd's are.

Last but not least... it is Salt challenge day today and it shows how God works as Esther had decided on her theme before she looked at Tanis' reflection last week! So the challenge was to think about Growth
Its been a good one to think about as autumn comes and I keep getting hit on the head with shiny conkers! How the seeds need to drop from the tree - to be lost to it, in order for new growth to come. And how generously those seeds are scattered in order for even just one to take root.
Those were my thoughts as I made this layout 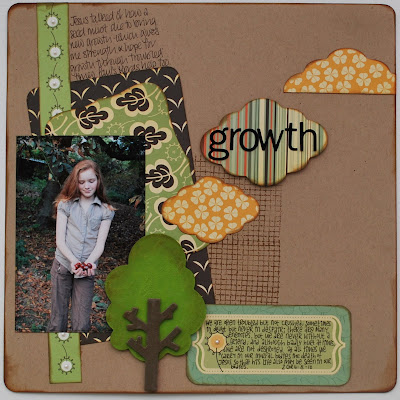 The photo is from the shoot I forced Carys into for my "Autumn splendour" layout a few posts ago - this time you see more of her! I used kraft Bazzill (for a change eh?) and some of my new things from Alexandra Palace
1: Cosmo Cricket earth love papers
2: Prima mesh background stamp
3: Nesties label die 6 (clouds)

When I got home I thought "why did I buy labels 6 but I have already used it as clouds and trees so I think it was worth it after all!

I also used
and copious amounts of Old Corduroy distress inks.
and a corner rounder. So into rounding corners on layouts at the mo'

oh my word...you have been a busy bee....love the LO's and your super scary halloween card....big hugs kath xxxxx

It's lovely to see the different angles the Salt team approach a challenge - love your take on this one. The LO for docrafts is so lovely - I can well see why you keep that nativity set out all year - it's gorgeous x

Fantastic projects Lythan, and well done on the LO of the week. for someone who doesn't 'do' halloween, this is a fantastic card, I just love your take on the challenge
luv
En xx

the halloween card is stunning