I made a child cry but I didn't push him over..

Well it is quite funny now.

At my harvest service for today (only one version left, a school assembly) I used an illustration of how you can't eat something without bending your elbow (unless you feed each other children, unless you feed each other). One child - who i shouldn't have chosen as he was a bit young BENT his elbow and I helpfully shouted NO! Everyone laughed. His little face fell. "but dat's wat I do ap home" he said in a small wavery voice. I said he could just finish it. He took what was in his mouth out and dumped it on the plate. "Don't want ANY" he sobbed. "Oh dear" I said "just go and sit down" and I moved my hand in a helpful sweeping gesture.
I didn't hit him.
He just tripped.
But apparently it looked like the Minister pushed him.
Oh my.
His mum came to the rescue.
I turned to the next child - a girl of 5. She looked at me with real terror in her eyes.
I let her eat some doughnut with bent elbows.

All through the rest of the service all I could see was the little boy - still so upset.
At the end when I went to apologize he said "dat's awight" and his mum said it was the people laughing that made him cry. Phew!

Here are some of my recent layouts I haven't shared yet. Finished another of the photos and journalling without a layout sections yesterday but haven't photographed it yet. It actually doesn't seem like less work. But maybe that is because I have to doodle on the photos too! 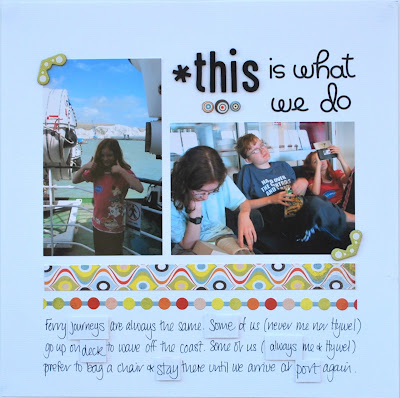 I messed up the journalling (can't spell journeys) and so tried to cover it up...
BG Offbeat bits and bobs; thickers and doodlebug letters. Pretty plain for me! 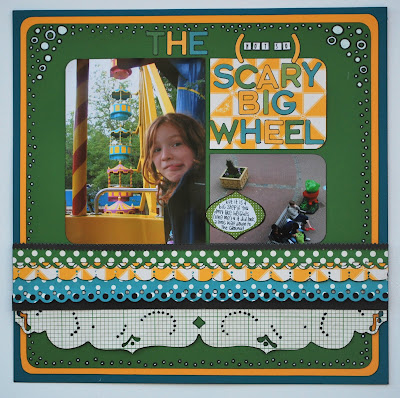 Roadmap by October Afternoon papers. A new Nestie borderability with stickles on it and various other punches too. Three layers of cardstock (unusual for me) from some chosen to match Roadmap by Crafts Emporium. Lyn from there sent an email saying she had the new OA lines in. I couldn't resist and they were in my hands (along with a Twix!) 2 days later. Mighty fine service there I think. The letters are Roadmap and Carolee's. The journalling spot is American Crafts. Here's a close up 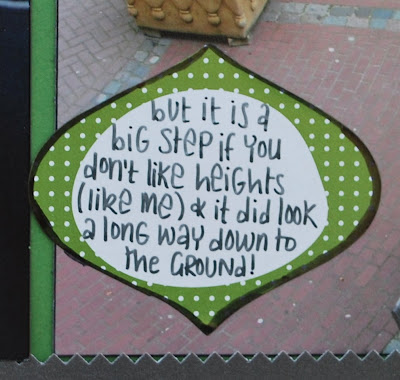 Right must go and tidy the crafty area before the evening service.
I have to work tomorrow (sulk) but I am off looking round another Uni next weekend so it all evens out in the end I suppose
Posted by Lythan at 4:01 pm

See I read that as 'Nestle' border and was all ready to boycott you because of baby milk & all that. Just shows I'm not a craft-y person. Like the story about making a little boy cry - aahh.
I once terrorised a balloon-phobic boy in assembly. I only got it out of my pocket. How was I to know??

Oh dear, poor little boy! All eyes on him..........
gorgeous layouts, I acutally think that the jouney mistake adds to the layout!
hugs
En xx

they say you should never work with animals and children lol.....fab LO's

These LOs are fabulous, Lythan.

Hubby and I are both sat here giggling at your harvest festival story. He wanted to know what I was laughing at so I had to read it all out to him....

LOL to your story Lythan, I'm having a good old little chuckle (ahh, bless him).