Last night I took Carys to a local camera club to do some modelling for them. She had a ball and was a really good sport at pulling faces and jumping up and down and all sorts. I naturally took our camera along. Thank the Lord for digital as it means that you can try all sorts of things and not worry about wasting film. It was actually a lot harder than I thought to get a good shot - to do with technical stuff like ISO's and apertures and all the words that make me start going "la,la,la" in my head because I don't really understand.
So... prepare to be bored by a few of the 72 shots I took!

this overexposed one is actually one of my faves... 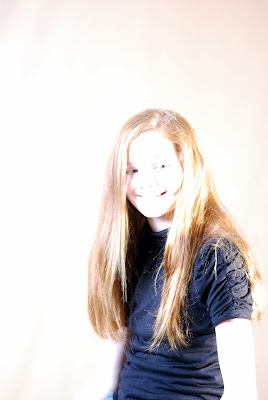 this has had nothing done with it post production either 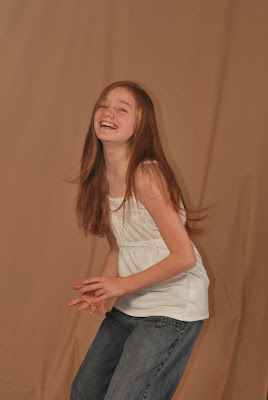 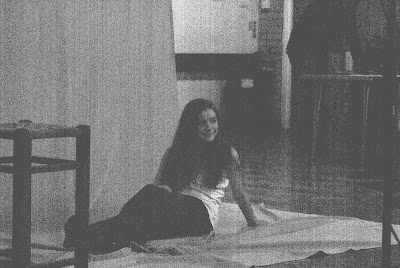 my first really successful jumping shot (shame about the beard!) 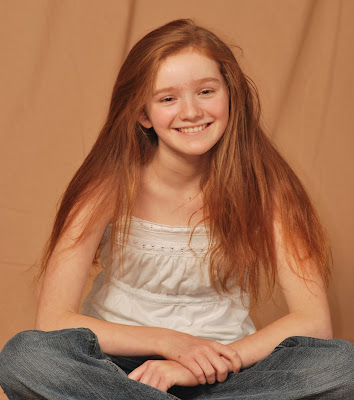 I look forward to seeing the other photos taken by those who know what they are doing. Carys had her braces out last week - look how lovely her teeth are! (She now has retainers and being the gentle, loving supportive mother I am I keep asking her to say "I am not an animal, I am a human being" while she struggles with the amount of hardware and saliva in her mouth and then laughing uproariously)

In other news...
I was supposed to be going to Belmarsh prison today to visit someone. V. nervous. Discovered yesterday he has been transferred to Norfolk (why he didn't write that to me but hoped that someone else would pass the message on I dunno) but I am relieved all round!

Today is Daring day. It is a pretty special one as we have now been Daring Cardmakers for three whole years. There are four of the original Darers who still take part regularly (can you spot who they are?) but no-one ever really goes away - once part of the team you are always part of the team! I have been inspired by so many wonderful card makers - both my teamies and those who take part in the challenges so thanks to all of you.

It was my turn to set the dare this week so I went for something simple (like me!)This week's dare is
I can see clearly now
and I would love to see something clear on your card. It could be an acetate card, an acetate embellishment, a window cut in the card, clingfilm, OHP sheet, Mirror fragments - anything that shows that your card is clearly one of the best!
It has actually coincided with some sad news (not end of the world tragic but sad anyway). I have found that the best place to buy acetate cards - Shortcuts - is actually on the point of closing down! Although it is in the US I have found them great value for money including postage. So if you want a bargain go now! 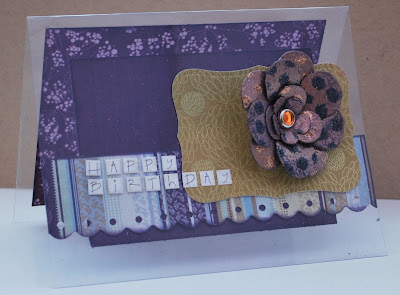 I think it is all about the layers - putting something on the back, the inside front and the outside front. Actually the card is remarkably similar to my one last week I think - purple, gold and a big flower. The papers are all Basic Grey; letters are Adornit; threading water punch; nestability label 8 (my new fave!). the flower is made using grungepaper and an Artistic Stamper stamp set. It didn't go quite as well as I had hoped (sulk) but it was my first go. I painted the flowers with a purple/gold acrylic paint and stamped over it with versamark and a Prima stamp. Then embossed with Stamp and bond powder and sprinkled black and gold glitter on different layers. Because I couldn't get it all to stick together properly I used a Papermania brad to hold it all.
Here is a version of the card more closed 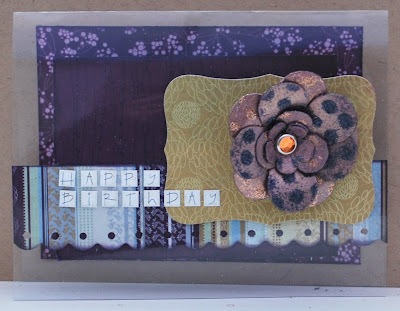 Right then, lets make the most of the time when I would have been going to prison!
Posted by Lythan at 9:45 am

*Love* this card Lythan...the grungepaper rose is gorgeous...the mix of papers are spot on too!

Fab card love that grungepaper flower, you've inspired me to get mine out again! :)xx

PS: Belamrsh - is my part of town. We're on the route from there to The Old Bailey so quite often see armed police escorts, that's London for ya! ;)

The pictures of Carys are fab..she's a natural!
As always your acertate card is wonderful. I will have to rush over to your fav seller and get myself some as the ones I have are tiny!
Anice xx

Carys is a natural - great photos of her. As for the acetate - you say simple? I don't think so lol. Love your card and the flower is delish.

Stunning photos of Carys, that last one is definitely destined for a frame and the others are highly scrappable. Your DCM is really cool, love the flower.

Great photos - it looks like both you and Carys had a fun time. All the techie camera stuff makes me go lalala in my head too - which makes hubby cross with me as he has to tell me the same stuff every time....

Love your card - and that big lush flower is just fab. It reminded me that I bought some grungepaper and suchlike a few weeks back and I haven't the foggiest idea where I put it....

Gorgeous card! I love the papers you've used and that fab flower that you made. kxx

Wow - super photos! and the crafting is also of that standard, of course - it always is. x