I was staying in a Travelodge yesterday and put the breakfast news on (never do at home!) They had a story about two churches in the same street from the same denomination both being for sale in Sunderland. I recognised the logo on one of the notice boards as United Reformed Church. (The two buildings will be because in 1972 the Congregationalists and Presbyterians joined together so obviously they must have built churches close together in the past. Sadly that is what churches used to do - compete!) The journalist was talking about closing these churches because they were only being used by a handful of people for a few hours a week.
That is so not true!
Confirming my feelings listening to the minister interviewed by looking at their website this is an active church which is selling two out of date buildings in order to create one that will better serve the people of Sunderland. Sigh.
Yes, some churches struggle and some congregations are aging but there are a lot of signs of hope too. I think that the Church will look very different in the future and would love to know what that will look like both for my peace of mind and for planning what I am being called to. But God has not finished with the Christian faith yet - despite the way we are sometimes portrayed in the media.

(jumps off soap box and kicks it into the corner)

Its been a busy week - both in terms of work and play. But also a fulfilling one which is good. I spent 24 hours in Derby - at the Travelodge - with two colleagues. We spend time twice a year sharing issues that we have and helping each other work them through. We are allowed to do some straight talking and finger/(soft) drink twizzler pointing and we hold each other accountable - if you say you are going to do something you will be checked up on. There is something wonderful about both being helped and helping at the same time. we don't live close - at either ends of England almost - which is why we meet in Derby as its central ish! but there has beena lot more on my plate too. And will be from now until Easter and then to the end of April when my MA essay is due in.

So I am hugely proud that Mother's Day cards were made and posted with pressies by Wednesday this week. This was helped along by Lynda's dare for this week on Daring Cardmakers
A Host of Golden Daffodils
this week.
Please use daffodils on your cards or maybe make a card inspired in some way by those sunny yellow flowers. 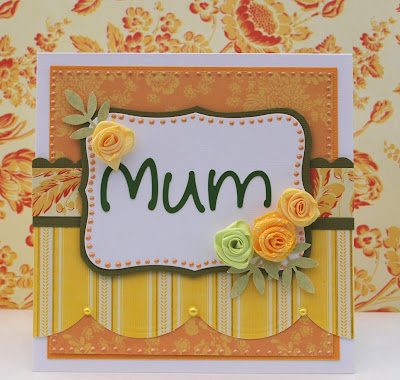 The astute amongst you will notice the absence of actual daffs. I decided to plump for daffodil shades instead. (Huge confession - and a shocker wot wiv being Welsh. I'm not that fond of daffs). What you see instead is my latest fad - making ribbon roses. I must have seen one on someone's blog and thought "they look good" and then searched for how to's on the net. It was quite tough going - several were incomprehensible to me until I found this video in English and French - success! Being left handed I find it easier to have the ribbon on the left and not the right hand side but I am now obsessed. I do have a lot of ribbon to use up mind so that is fine.

I am behind on my service prep this week although we are having a shorter service to fit in the church AGM without all the mothers rushing off to be spoiled. The reading is the story of the Prodigal Son - one of Jesus' best - especially because you have to fill in the ending (does the older brother join the party or not?) and also because of the way it demonstrates the wonder of God's unconditional love. But it is about a Father not a Mother. Mind you - I don't really like making a huge deal of Mother's Day as I think it can be painful if you long for children and don't have them or if your Mother has died or you have a bad relationship with your Mother. I don't know how any of those feel but we will find ways to remember these pains in prayer on Sunday too. So I think God's love for us all no matter what category we fit into is the best theme for Sunday.

Big meeting for me again tomorrow and then I look forward to the work rest, worship and play of Sunday!
Posted by Lythan at 10:59 am

stunning....just love the flowers youve made.

Whenever you get on your soapbox it's for a good reason so don't kick it too far away!
Your card is wonderful as are those ribbon roses, thank you for posting the link I shall definitely be having a go at those.

I'm with Kathy - don't kick it too far! Sadly, too many things aren't portrayed accurately in the media!

Gorgeous card - thanks for the link too, I'd like to have a go at those lovely little roses. :)

Absolutely love this card Lythan - it's very pretty and those roses are beautiful - will have a look at the tutorial - thanks.

In my home town we have sold two United Reformed churches and are just about to embark on building a new church in the community. Although all we get is, 'why have you knocked down our old hall."

Your card is lovely. Sadly the media only seem to like reporting about 'bad news' concerning churches and not any good stuff!

Why shouldn’t you have your say Lythan, everyone else does and it sounds to me like you have good reason. It’s so unfair when the reporting is all one sided and not that accurate.

It’s a shame that you’re having such a busy time of it again but in the time you had to yourself you’ve made beautiful cards for your two mums. I would never have guessed you had used w’s instead of m’s if you hadn’t have said.

Have a great weekend and I hope the family really spoil you on Sunday because you really deserve it.

Hey Lythan, you should get on that box every day, never kick it away, what you say is really relevant...
Smashing card, the mums will love them,
Have a lovely weekend,
hugs
En xx

I'm intrigued about your service prep - do you use the lectionary? Only asking because our reading was the Prodigal Son too (and we also had our AGM!)

Lovely mother's day card, so elegant. Thanks for the link for the roses, maybe now I can make them properly. :)xx