The year was 1993.
I was 28.
Finally one of my life's ambitions was being fulfilled.
I think it came via a chat between Phil and Steve's Dad, but I can't remember.
Anyway, I got to sing backing vocals on a couple of tracks.
My church in Hartlepool had given some of its unused rooms over to be a recording studio to train sound engineers and launch bands so it was there that I did this 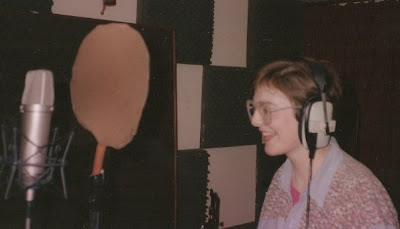 which, thanks to Steve Cooke finding a way to put music on line, you can now hear as well.
Security Risk
I think this one is my favourite and I don't think has really dated at all considering it was 17 years ago! Well it has kept fresher than those glasses anyway... Ah good times.

Back up to date. Its Daring day today! And it is the first Friday of the month which means its a birthstone challenge. And the stone for March is Aquamarine. We sometimes have a joke argument at home about whether turquoise is blue or green (made more exciting by having two colour blind members of the family) and you can have the same debate with Aquamarine.

My card is firmly on the blue side - but I do love blue/green shades anyway so if I did another it might be more green. It just so happened that I had a Crafty Templates card kit to use up with some lovely bits in it. 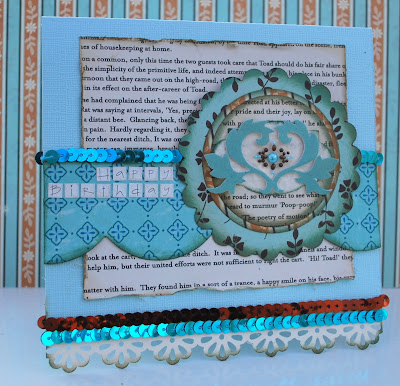 The card was hard to photograph thanks to the sequins and does really tone together better. Cream card, blue card, sequins and the focal bits and bobs are all from the kit. The papers are various October Afternoon and the letter stickers are Adornit

I made another card in similar vein but haven't put a greeting on yet as I can't decide what it is for. I think this soft paper is the best for making tiny roses. 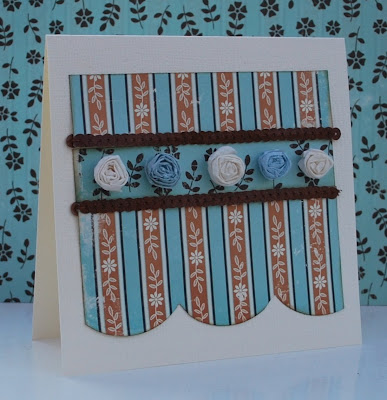 It is the Centenary celebrations of our Boys Brigade this year launching on Sunday with a special celebration service. And the evening service will be looking at Postures in Prayer - as part of the URC year of prayer so we will be standing, kneeling, sitting, walking around. I did toy with prostrating as well but fear not everyone could get up again(and I think that is usually a private posture anyway) Any other ideas for body shapes for prayer will be gratefully received!
Posted by Lythan at 10:00 am

Love the music Lythan but I would never have guessed that was you singing, it sound nothing like you.

Two beautiful cards for this weeks dare, the first one is stunning with all the sequins on.
Sue
x

Both are stunning! love the super sparkly sequins!

I'll investigate the music later - don't think D would appreciate it as he's working atm....
I love both the cards - I love all the different bits and pieces you've used on the first, the collage effect is fab. But I also love the more simple design of the second which really makes you see those pretty little flowers

Gorgeous cards! and if you're doing prayer postures don't forget the 'shampoo crouch'! More seriously - use of hands? open, to praise/receive, clenched for confession, etc...?

They're both fabulous Lythan and I adore those papers. What a voice too - that is one thing I wish I could do... sing!

What a wonderful voice Lythan! :)

Beautiful cards too. I'm not fond of sequins, but you've made them look wonderful.

Lythan did a brilliant job doing harmony vocals on this and five other songs that I recorded in 1993 ('Obeying Orders', 'Holier Than Thou', 'Product', 'Alright For Some' and 'Faulty Information').

All of these, except for the latter, are available for listening and downloading on the same website as mentioned above.

What a shame that Lythan is now living on the other side of the country these days (I'm on Stockton-on-Tees) as I'd really love her to do the same thing again now that I'm getting back into writing and recording new material.