Today I stepped down from the role of Chair of the Compact for Havering. A Compact is a written agreement between the Voluntary Sector and Public Bodies about how they will work together. I am mightily relieved that the new Government have endorsed Compact otherwise the last 5 years would have been a waste but apparently it is a vital tool for Big Society. I became part of Compact because I was wingeing in the sidelines and I have a rule which says if you moan a lot you have to do something about it. And because I moaned about something else I ended up being Convenor of Area Committee for the United Reformed Church which means I have to step down from Compact. I have another rule which is if I take something on I have to give something up.

Gosh with all this sensible work stuff and having made cupcakes and altered a t-shirt this week I feel quite the super woman. But really, really, really I am not. e.g. I should be making tea for the family RIGHT NOW and if you saw the state of the study floor you would cry. And I have actually been doing both jobs since January up to now!

I am sad to be leaving behind the Compact and the politics and policies as I love it all. I might be able to still be involved in a small way. What has made me laugh over the years is the surprise shown by those who have seen me chair meetings and give speeches. Being a Minister involves an awful lot of chairing meetings and giving speeches - I guess people don't equate leading worship with speeches and think all Ministers do is tidy up the hymn books (that's the view on the tv anyway).

We managed to squeeze Emrys' birthday tea in before some meetings on Wednesday - Pizza Express as it was local (and speedy and delish!) . I was glad that it was his birthday this week as it gave me impetus to do the card for this week's Daring challenge nice and early. the theme is
Boyzone
(Which seems unfortunate now given that the group is in the news again, not for good reasons. oh Ronan, why?). There are some great download prizes on offer this week from Charmed Cards and Craft.
See the Daring Cardmakers blog for details of the prizes and how you qualify.
Here is my card... 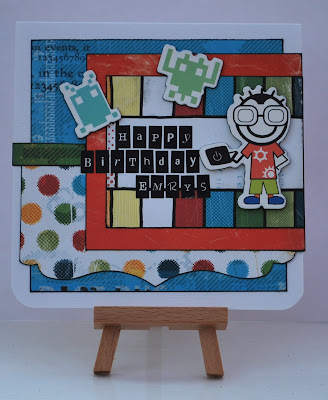 I found these rather cute Papermania chipboard pieces for men and boys - expect to see more soon. This one looks a bit like our Em who is usually glued to a console! The papers are all Cosmo Cricket Cogsmo which I saved for best years ago and then didn't use it but I must get it out again as the colours are great. I also used a Tim Holtz die and MLS stickers.

The meeting I had on Wednesday was the AGM of one of my Churches. People write reports which are published and I like to give thank you cards to everyone involved. Some leaders cover more than one group so I had 17 cards to make. I managed them all in one evening by making them small and using a production line. Here are three of them 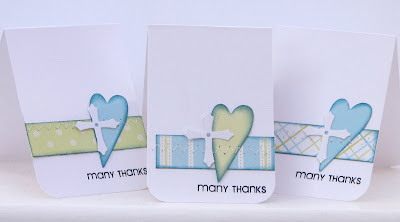 They are half A6 (7?) and feature an inked strip of card and a QK heart sewn together with zigzag stitch; a Papertrey Ink sentiment stamped direct to the card (only one fluff up, go me) and a Nestabilities cross on the top. Simples. Now I just have to write them all. But maybe make tea first....
Posted by Lythan at 5:53 pm

That is so the perfect card for a teenage gamer - love the character and the fab papers. My sentiments too re Ronan (shakes head). Your Thank You cards - how delicately pretty are those. Thanks for your lovely comments too about my Craftwork Cards Stuff - I enjoyed using those lovely papers.

My son seems to be laminated to his console sometimes! Emrys' card is such fun!

Go you, indeed, stamping directly onto the card is scary! Those little cards are just perfect.

Hope you enjoyed your tea lol! Goegeous boy card, Ronan has been rather silly.... love the stamped ones too - I can't imagine trying to stamp directly onto a card...

Perfect teenager card Lythan, Robots seem to be everywhere at the moment, I wonder why? Love the pic of your t shirt, very fetching, you look really chuffed...
big hugs
~~En xx