Zoomed by my blogaversary last week. I've now kept this up for four years. Amazing! Still I note that two of the last three years I was sick around this time of year so not being is a bonus. I'm too busy to be sick at the moment really.

I did have time to stop and be crafty today though. Love my day off! Also fitted in a clean of the craft room and loo and movie night. We watched Defiance which scored at least 8 out of 10 by all the family members. Now Carys is nearly 14 we watch more 15 films as it does extend the range of what we can watch. Actually some seem less sweary and violent that 12 films to me...

We didn't have a takeaway tonight as Phil and I both had one of my Peanut Butter cupcakes at lunch time. I found a recipe for PB cupcakes with PB frosting and chocolate topping that I just had to try. Next time I make cupcakes I will halve the ingredients as these would feed a family of four for a day (let alone being the calorie count for a Sumo wrestler for a week - I sued a whole jar of PB!). They are delish but the most filling and sickly sweet treats this side of Cadbury World!

Here are two layouts I made today - both Weymouth hols ones. 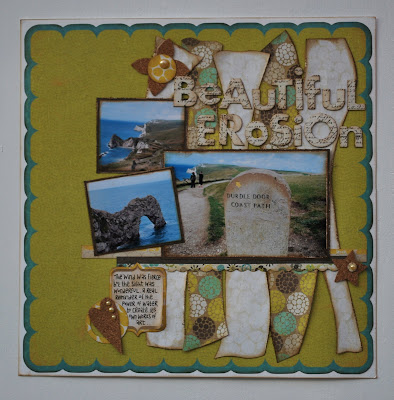 This is taken the day we went to Durdle Door - a really amazing natural phenomenon. I would have liked to dawdle round Durdle but it was cold and the kids weren't having it. "It's just a rock" Sigh. The papers are Crate Paper Brook. I got a great tip from their blog about using the very bottom edge with the tag bit, so I have used two of those here. Also used Brown Corduroy distress ink; Chatterbox cork embellishments (one recut with a QK heart die) Making Memories Letters and Prima pearls. Here is the writing bit 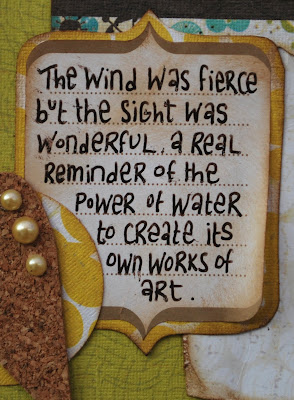 And here is the second 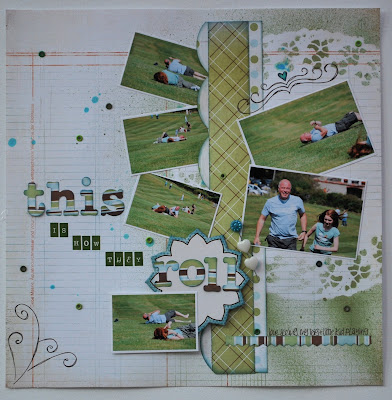 Must remember to buy Emrys some birthday presents tomorrow. (for Wednesday!) He finds it hard to suggest anything which makes shopping difficult too. We have found a way to squeeze in opening said presents which doesn't involve getting up at half six so it is done before H goes to college and means there is just time for a birthday pizza at our local pizza express in between H arriving home and me having to go out for a v. imp meeting!

For those of you who have been reading and supporting for four years - thanks! I often feel like my crafting is a bit dull and derivative so your nice comments always cheer me up!
Posted by Lythan at 11:27 pm

Well of course I have NO idea what I'm looking for but they always look amazing to me. It also enabled me to have an almost intelligent conversation with some crafters in our synod office last week, who were waxing lyrical about a craft place in Soham 'capture the magic'...
Thanks for sharing some of your magic!! B - )

LOVE the LO's especially the 'roll' one great photos!!

Happy Bloaversary! Now you mention it, I'm sure I started bloggin at about the same time - so probably missed mine too!

Those LOs are wonderful