Not waving but drowning

I am just overwhelmed by everything going on and decisions to be made and prayers to be said and meetings to take part in at the moment. Aaaaargh.
And I am trying very hard to keep balance in life at the same time - making time for rest and play as well as work. But it is so hard and when I feel like this I often end up doing nothing and just giving my best White Rabbit from Alice impression. God help me. That is both an exclamation and a prayer!

I can't share the bulk of the work stuff here but can share the play!
Firstly, yesterday's Salt challenge where Julie asked us to think about a Mother's Love - particularly in terms of Hannah. I was struck by this paragraph
I was reading an excellent book this week the author talks about motherly love and one of the best examples of it in Bible, Hannah. We all know the story well I'm sure. As a mother I cannot imagine giving up my son, my firstborn son, to live far away from me the care of priests at the temple. But the author pointed out that the very next verse after Hannah takes Samuel to the temple and gives him over to Eli is I Samuel 2:1: "And Hannah prayed and said, 'My heart rejoices in the Lord.'" After doing what was probably the most difficult thing she could have, she praised God! Hannah knew, as we should, that our children belong first to God - He loves them more than even we do and He has given them to us for a short time to raise for His glory!
which formed the basis of my layout 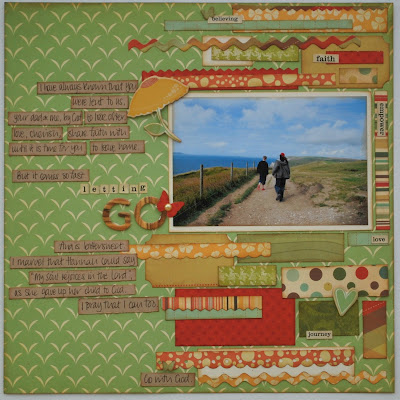 alongside this weeks Studio Calico sketch. I don't get SC kits. I did once win one and it was fab but I just can't afford to so instead stand with my nose pressed against the window drooling. So I used Cosmo Cricket papers, chipboard and stickers from various collections which I inked and sometimes punched. Here is a close up of most of the blurb 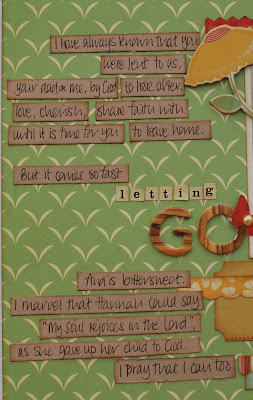 I am aware I have three kids not two but Carys will be at home a lot longer than the boys!
This is something I have always felt profoundly - when H first went to Playgroup at 2 and a bit I thought "ah, that's it. I am already beginning the process of him being independent and that there are parts of his life I may never know about and can't control". To think only 2 years before that I was wondering how my newborn could sign his prescription when it dawned on me that he was my responsibility.
And all to soon he will be - to all intents and purposes - leaving home and making his own decisions. Sigh.

OK enough being maudlin, on to Daring Cardmakers.
World Cup fever even appears here (is there no escape?)
The World is Your Oyster
I'd like you to celebrate all the amazing and diverse countries and cultures we have in this world of ours by making cards with a "feel" of any country you like. There's a whole world of possibilities out there, so don't just go for the obvious {wink
I don't mind the footie it is the all encompassing nature of the coverage - with Wimbledon coming to fill in any sport free holes in the middle - that makes me despair. But I'll say now - Come on England!
Which, as they play the US for the first match means my choice was not great... I went for almost the obvious - stars and stripes - and ended up with (close to) red, white and blue colours. 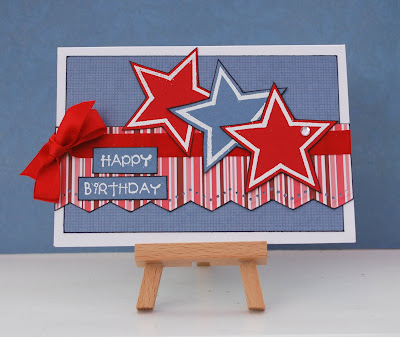 I used some really old double sided papers; Purple Onion stars and sentiment embossed in white; Martha Stewart punch and Papertrey ink ribbon.
Some of the others have been ooodles more creative so go and take a look!

I have two services this Sunday - in the morning we will focus on Greed and Generosity with the wonderful story of Naboth's vineyard which has the whiff of Macbeth about it. Sunday evening we have the first of a monthly communion service shared by our emerging group of 5 churches in the area which is a significant marker to our progress and I will talk about being a New Creation - even though I am feeling very jaded myself!
Posted by Lythan at 12:45 pm

The LO is wonderful - I am always amazed at how much you manage to convey on one sheet of paper. I think you must use bigger sheets that everyone else because even wit a "big" message, a photo and some gorgeous papers, patterns and embellishment your LOs never look cluttered.

Awwwww sending you a big (((HUG))) too! Hope you manage to get through everything. At least your 'play' time seems to be thriving... your layout and card are fantastic!

Hope life is a bit easier by now. As for family changes, it can be hard as youngsters grow and move on. Your Salt LO is spot on (as usual) x

I can't believe I missed leaving you a comment for our last challenge!! Sorry about that, my friend!! I know I say it again and again but honestly, your pages are so amazing. You have such a wonderful ability to take multiple elements and have them merge together seamlessly. Stunning!!