Its been quite a week

and it's left me quite weak!

First there was this 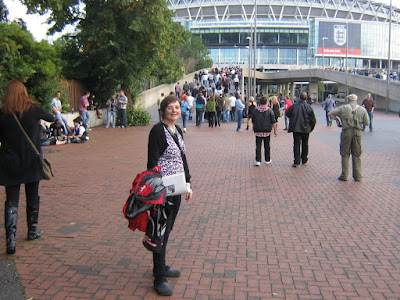 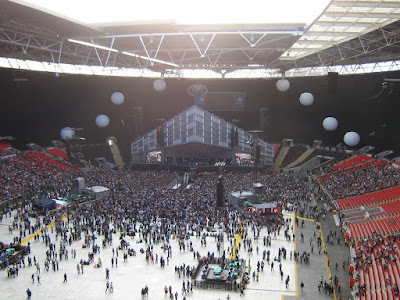 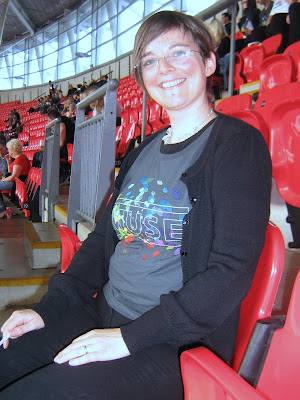 Things I noted
1: Ticket touts are grubby. Not just morally, literally. (And I had a ticket, thanks)
2: Wembley Stadium is uber organised. Toilets lovely and clean. So well co-ordinated with the police and London Transport
3: Muse are the best
4: No, they really are
5: They played for 2 hours and 15 minutes with about 5 minutes non playing tops
6: And the lights were awesome (that thing that looks like a car park at the front was all light uppy and everything)
7: I am middle class and polite. I clapped for all the support bands (I am arrows: cute and shy but the sound balance wasn't great; White Lies: lovely if you weren't around in the 80's but otherwise rather familiar; Biffy Clyro "its like being shouted at by a Dulux Dog" said Phil. I had told them they were a bit folky having listened to their single God and Satan. More "Oi" than folk. And Far. Too.Loud) and tutted at those who only turned up for the main event. The people behind me didn't stand so i didn't so that their view was notobscured. Apart from Knights of Cydonia. Everyone has to stand up for that. OK only me in my row...
8: I wished I had bought tickets for both nights
9: I realised that I felt all motherly about the three boys two rows down who knew all the words. Then realised I am old enough to be their mother.
10: I don't know all the words but I can sing really high like Matt Bellamy.
11: But that doesn't sound so good when you are slurring the bits you don't know
12: And you are a girl
13: Based on 9, better make that woman.
14: Elderly man who looked asleep in the row behind - how could you!
15: Can you tell that I have never been to a stadium show before?

So that was Saturday. Got home at 1:30. Up early for an elders meeting before worship on Sunday. Mmmm. Fabulous service in that everyone was involved and we realised that we may have come to the time when we need to move our service into the larger hall because there are too many of us for the place we now are.

Then Monday I got the lurgy. And for three days have been prostrate on my couch too feak and weeble to do much - barely vertical. I get a virus every now and then that scrambles my brain; steals my energy and makes me feel car sick all the time. I'm recovering now but am taking it easy and because I have ooodles of proper job stuff to do I can't participate in crafty stuff just now. And still don't have the energy really.

Yesterday was also made exciting by our shower pipe bursting and turning the bathroom into a wet room. I now know what to do when that happens (turn the other taps on to reduce the flow and then turn off the stop cock which is in the garage) but yesterday I did my best Chicken Licken impression.

My problem is that I am now addicted to Coach Trip...
Hope to be back and crafting next week :)
Posted by Lythan at 6:40 pm

Chicken Licken - hehehehhe! Very good film! And thanks for the water tip too.

Hope you are feeling a lot better now

A haa daytime tv has hypnotised you too. It's pure evil.
I'm so glad that you enjoyed your day, I'm only a teensy bit jealous (especially as I like Biffy Clyro) xx

Been meaning to ask you how the concert was - sounds fab!
Funny how you got the lurgy a couple of days after going to Wembley though - we were exactly the same after going to the Coldplay concert!