Finally had some time and energy to craft yesterday - hurray! I had a very work filled weekend so a day off was much needed. I finally managed to finish a layout I had been working on when I fell ill last week so it counts as the slowest ever to be finished! 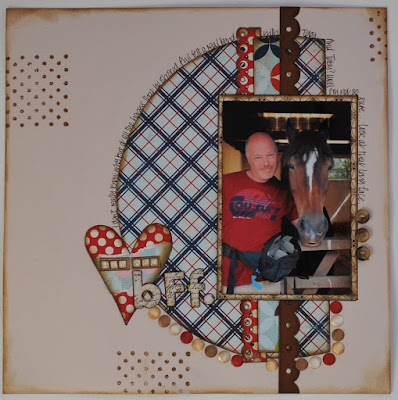 The papers are all Girls Paperie. The brown scallop ( was orange) is from Bazzill. I used brown corduroy distress ink and a Prima stamp. Adornit and MM letters and some Card Candy. When I showed it to Phil, before he read the journalling he said "did you mention 'a long face' ?" . Yes hun I am that predictable. He didn't know what a BFF was and feels that he is no wiser for knowing.

The next one took a few hours to work out and to get the lettering right. It is for a class at Imagine That. I don't think it will take so long to do as a class (I always end up making the class run on rather...) 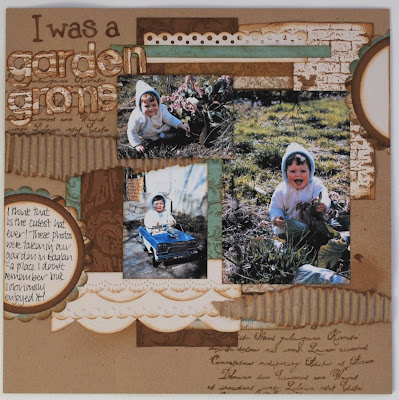 which is all about texture. I was actually sensible enough to go and cut the letters at the shop, as I don't have the same alphabet at home. I could tell you all about the layout but you will have to come to a class instead. And yes, that is me!

Finally after watching the Princess Bride for the first time (how have I missed it before?Even my jaded teens loved it) I was inspired to do just one more quick layout. It took an hour (please don't say "and I can tell" because I will cry) 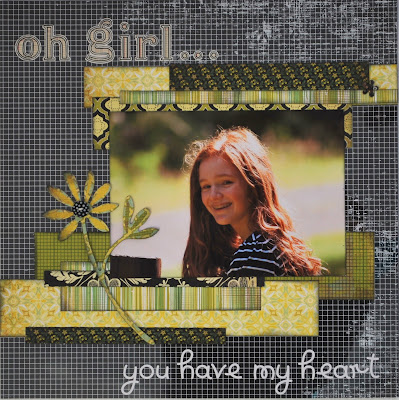 It came about because I had to tip some papers out of a box in order to take the Gnome layout to the shop to finish it off and there was a beautiful hambly screen print. Something I had bought 3 years ago and felt too precious to use and so was neglected. So I bravely did. I backed it on black as I knew it would need something behind it in the holiday album. The papers and chipboard are all Basic Grey Origins and the letter stickers are Jenni Bowlin and Doodlebug. The top title came about based on the letters I had left and the bottom one is just true. no real journalling (faints) but there isn't any more to be said really.

So now I am going to attempt to catch up on a few things before I get really behind again. And prepare for harvest this Sunday. I don't know quite what we are doing but we will be singing "We plough the fields and scatter" and "Come ye thankful people come" as I have discovered that folk don't think it is really harvest unless you do. And never, ever, ever replace the original tune for the funky one out of Godspell for "We plough the fields". Trust me on that...
Posted by Lythan at 7:55 pm

My Blog is now HERE

And never replace the WORDS for we plough with 'we plough the fields with tractors..' (google it, it's not bad!) or the more stroppy members of the congregation will continue to sing the 'RIGHT' words. *sigh*
Oh yes - of course these are lovely. x