14, 733 words that is.
That is the sum of my dissertation not including bibliography. (ooh forgot to attach that when sending the rest to my supervisor. Be right back) Done.
Also 14, 733 does not include any quotes over 50 words long.
or the 47,737 words I transcribed from interviews.
Its not finished yet. I will be in fear and trembling next week when meeting the lovely Revd Dr C.
But I am so close now, so close.
I may go on about it a lot but it has rather taken over my life for the last 13 months.

Then it will be lots of finishing things off and beginning to start new ones. A very strange feeling. 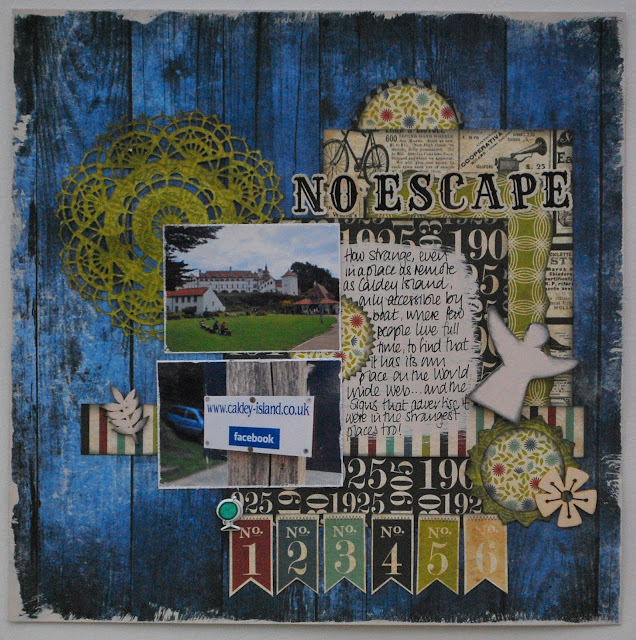 This is where it pays to sort through your scraps. I've seen paper like this in a new MME line coming out and thought "oooh love that painted blue". Opened an old box and lo, there was some there. It is paper rather than cardstock so I stuck it to a white card for better backing.
The papers are Echo Park Times and Seasons. I also used a Cheery Lynn doily die (lovely die, terrible name) plus some Kaiserkraft wood pieces and an angel from Tesco, painted cream (she was pink and gold, bleurgh. They sound like Cheery Lynn colours). 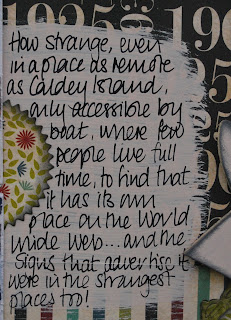 Phil and I thought it was so funny that on this hard to reach island which basically is a monastery community there were all these signs for Facebook in random places. 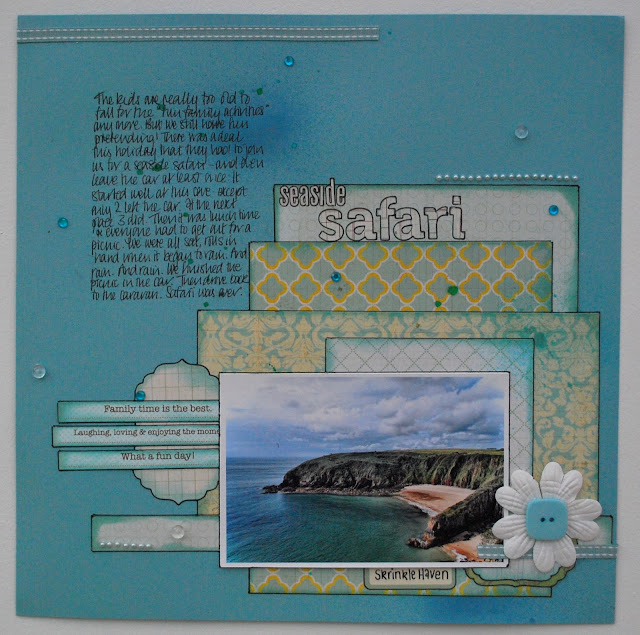 This layout was inpsired by Miss Smith's Just One Sketch. You are supposed to choose your own, which I will one day but for now just nabbed hers! Everything is from a Gotta Craft kit apart from the sticker with "Skrinkle Haven" written on it and the gems. And the sprays. 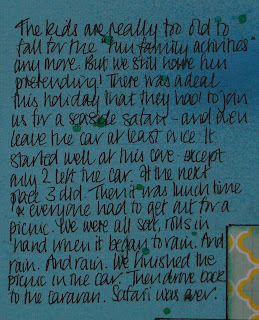 Its another funny story about how we forced everyone on a family trip on holiday and then it rained so we went home again.

Right, just getting ready to Shred. I've actually recovered enough to go running twice since starting to throw myself around the sitting room like a mad thing. Wish I could master the press up though. I blame gravity myself...

BTW thanks to all those who said that they read the blog - much appreciated!
Posted by Lythan at 4:46 pm

you are so flippin' good - all that work and all that exercise I am so impressed.

Well done with the dissertation hun, you’re almost there!

I know how hard you worked on this over the last few years and I just know you’re going to be fine at next week’s meeting. I’ll be keeping everything crossed for you.

Beautiful Lo’s as usual and stunning colours, especially the first one. I know the saying goes “Blue and Green should never be seen unless there’s something in-between”, but it’s a colour combination I’ve always loved.

I think you really need to 'play and play and play' all day after all the hard work you have done on your dissertation. I am sure your hard work and dedication will pay off though.Love your L/Os . The colours are glorious.