The long and the short of it


So here is my DCM card for Zuzana's fab challenge "Hat Boutique". I have had this little wooden picture hanging about for ages and noticed the elephant had a hat on - and it went from there really. 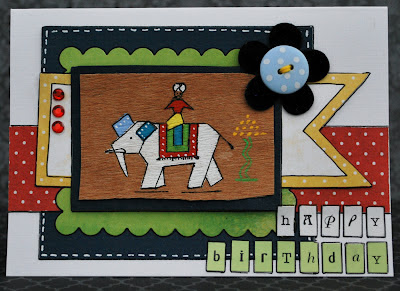 It all got rather colourful in the end! I used up lots of scraps. Apart from the yellow which is from my latest MME collection (feet hurt after days shopping so I am not going to find out what it is called right now). I added some ancient red gems, a velvet flower and polkadot button.

And now I am going to probably snooze for a while. Shopping is hard work you know!
Posted by Lythan at 6:58 pm

Wow Lythan you have had a busy week!! I'm worn out reading it lol.

Gorgeous bright and vibrant card, love the image, perfect for the challenge x

What a sweet image, and I love the combination of colours and papers, you always manage to combine things so well xx