After the ball was over...

Well the wedding on Saturday
And three services on Sunday
I am wrecked and Phil has given me the gift of his cold.
So today I have no voice. Which is rather annoying as I actually need to use the phone.
(I hate using the phone).

The wedding was great, the bride looked beautiful and the celebrations were good. I don't have any photos as I didn't take my camera - kind of felt I had enough to do as the Minister! As I was going to the reception, as soon as the service was over I changed into a dress and jacket and was amused by all the double takes from people :) I could have danced all night - I love to dance and don't have many opportunities these days. But I managed to drag myself away with the knowledge that I would be leading worship at 9:30 in the morning!

The services all went well. Two were parade all age worship services which are not my favourite style to do. They are a fine balance between keeping lots of youngsters occupied and learning something whilst also being meaningful acts of worship for everyone else. Who knows if I truly managed it and although one is to avoid the "stunt at the front" apparently, the memory of a scout gamely trying to open a tin of peaches with a mallet still makes me smile! (I think the wooden chair is alright but I do apologise to Trinity church if not. I leave this as my lasting legacy - the chair that Lythan dented. Well the scout did it but I was supervising). Choosing to do the same service twice in quick succession I was intrigued to note that neither young lad picked to open said tin can, knew how to use a tin opener. This actually worked in my favour as I was able to comment that Christian Aid does not just provide the right tools for people to help themselves (tin opener rather than over gloves or mallet) but also teaches them how to use those tools.

Maybe it was last night that helped me lose my voice. The United Reformed Church were invited to join the Church of England local deanery session to hear Lee Gattiss talk about "1662: the triumph and the tragedy". 1662 is when 20% of the Anglican clergy were chucked out for refusing to conform to the Book of Common Prayer. This is where many URC's can trace their roots back to - including Romford URC who are celebrating being 350 this year. Although we knew we were about as old as you could be, why the church began then we had been (ok I had been ) a little hazy about. I now understand it all. We had communion from the Book of Common Prayer which was good to share together but it did all cement for me why I am glad to be non-conformist. I suspect it may have cemented for some of my Anglican colleagues why they are glad to be C of E. So it's all good!

Oooh that was all a bit long. Probably because I can't really talk!
Now for some pictures. I did some scrapping last week. 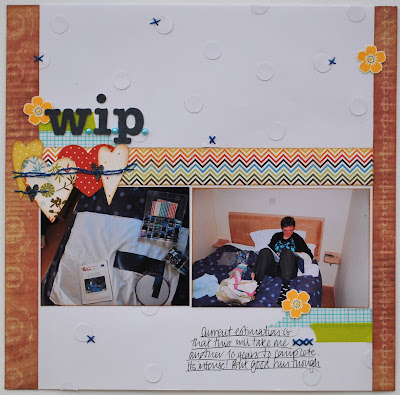 This was the last layout inspired by Shimelle's crop. It was to make a page based on this layout

I managed tocrop my photos too small. Sigh. Still the white border around them is fine by me. I used a mix of papers including the very first Cosmo Cricket ever on the sides. Why are the sides uneven? Maybe because I stuck down the wrong piece on the left. But went with it anyway. I also used some October Afternoon, MME and Echo Park papers along with some washi tape and Thickers. I thought I should add some cross stitches as well.
Here is a close up (slightly blurry) of said WIP 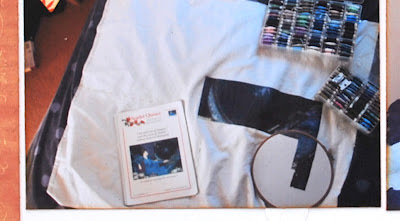 I have now finished the thin column on the right hand side top to bottom. I have started moving to the left, rather handicapped by the fact that I managed to turn to the wrong page and now have to stitch over the mistakes as it is too fine and complicated to unpick (most of the work is made up of stitches with  two different colour threads together). Big sigh. And I have managed to leave the pattern book next to some baby wipes which means part of the colour has leached out and the pages are delicate... 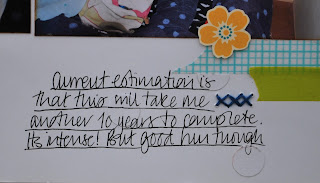 And here is the other offering for my Tenby scrapbook - still a few more pages to do! 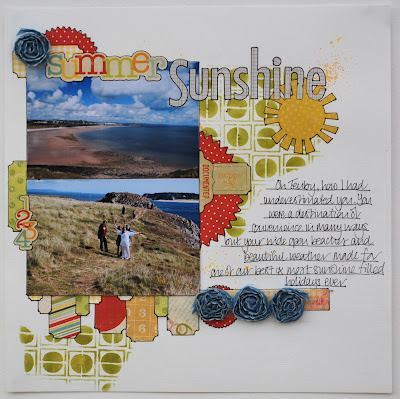 This one uses one of my new Crafters Workshop templates and lots of Echo Park. Instead of a banner I decided to punch out lots of labels and layer them under the photo. The lovely denim rose ribbon i bought from Imagine That, which has a fab new website. This will definately be the last layout in the album as the journalling reflects the end of the holiday. As it happens the photos were taken on our last full day as well. The sea and sky were so so blue! 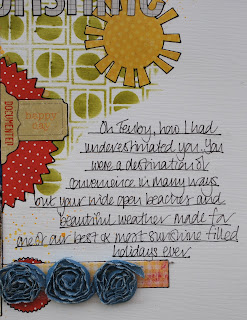