Its been quite a week

A fair part of it has involved me whinging around the house saying "I've got a co-oooooold". But apart from a little bit of a cough I am all better now. And I did fabulously well on my Christian Aid collecting (50% of the road gave me something and only 20% said no) so i think being poorly gave me some sypmathy cash there!

A part of it has involved going to meetings for the last time. One meeting was quite good in that there was a sense of "our work is done and now it is over to you". Although some of the other faces looked a bit glum at that. That is the hard bit of leaving somewhere

A part of it has involved going to a recording of a radio programme in order to score QI tickets. PHil and I went to hear Rufus Hound doing an episode of "My teenage diaries". Phil had never heard of the show which I have listened to a fair few times on Radio 4. "You'll have heard of the guest" I said airily, and named all the ones I could remember. Usually funny people. Then Rufus said "Welcome to my guest - Jackie Kay". At first I thought - did he say Jackie Clune, the comedienne? Then she came out and no it wasn't Clune. Then the words "Poet?" "Lesbian?" "Bet Phil has NEVER heard of her" came into my head. Turned out I was right on all counts
and
she was fabulous. It was an amazing hour  - she was funny, warm, thought provoking. Honestly I wouldn't have necessarily gone along if I had known who it would be (I suspect that is why we were bribed withQI tickets) but I wouldn't have missed it for anything and it has taught me that it is worth trying things just to see. It will be interesting to hear what makes it through the cut to the 30 minutes on Radio 4 at 6:30 pm....

I've also managed a little crafting this week. And I was actuallly first to reveal my Daring Cardmakers card this week (faints). Rein suggested the theme of Locks and Keys and as it is our wedding anniversary on the Monday coming up (24 years!) I knew what I wanted to do.
Phil look away now... 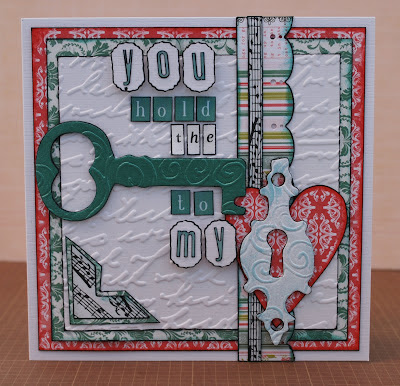 It's my mum's birthday on Sunday so she needed a card too.
Mum look away now... 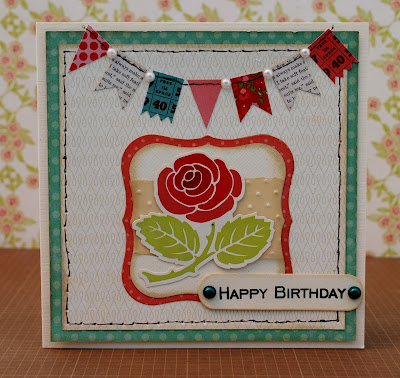 This card uses Echo Park This and That Graceful 6x6 papers and stickers. The card has a cream base so I swooshed some Vintage Photo over the flower sticker to make it less white looking. Lots of faux stitching going on and I embossed a little bit of vellum as part of the base label for the flower. I was about to give away the vellum when I saw some embossed on a blog and have now retrieved it for personal use! The sentiment is an Imagine That stamp - from the Wish upon a Star set. I love that font so expect to see this used a lot in the future!

Here are two more quick cards. I couldn't resist this set of Artemio chicken stamps - which will mostly go on labels with the eggs we give away 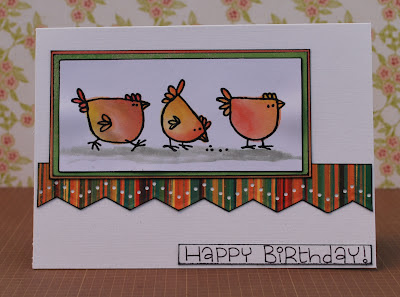 There are loads of little cuties in the set. I coloured them with Distress Inks and found the perfect pad of papers to make backgrounds with - Basic Grey Obscure - which is quite an obscure choice really! 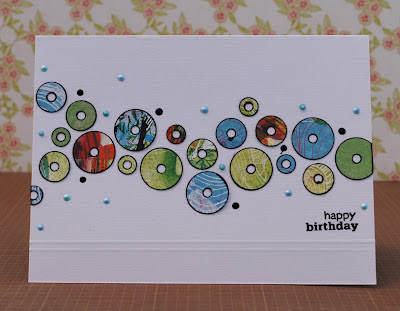 again I used the Obscure pad. I inked round the edges of all the circles with a Sharpie pen and added Liquid Pearls and black Enamel accent spots. Its an easy to replicate card and is nice and flat for UK posting

It is Pentecost this Sunday - a big event in the Church year - but one without all the traditions of Easter and Christmas. I'm hoping that by Sunday I can think of a creative way to celebrate!
Posted by Lythan at 10:18 am

I hope next week is less hectic - it is sad saying goodbyes, I hope you are ok, glad you are feeling better :)

Fabulous cards - I love the lock and key that you used, the bunting on your Mum's card is beautiful and the sharpie edging looks amazing!

Gosh what a hectic week! I love all your cards, just wonderful, and that chicken one is just so cute! Sx