Cue for my favourite joke

Why are pirates called pirates.
Because they Aaaaargh.

Which has been swirling round my mind as I made my Daring Card for this week. (I wish I could have remembered it when Carys asked me for a joke two days ago. When put on the spot I can only remember a rude joke told to me 25 years ago. I'm not repeating it now. But whenever asked for a joke that one comes to mind first and allows no cleaner ones entry and I always have to say "I don't know" rather lamely)
Anyhoo this week we were all sent die sets from the generous Docrafts to play with. And if you join in this week you can win one of them too!
I was sent the Nautical set. The die sets look huge and I did wonder how it would all fit on a card. Well
a) you don't use all the dies at once
b) they are deceptive. I used a 5x5 cardbase which is not that big and managed to fit a load on anyway. 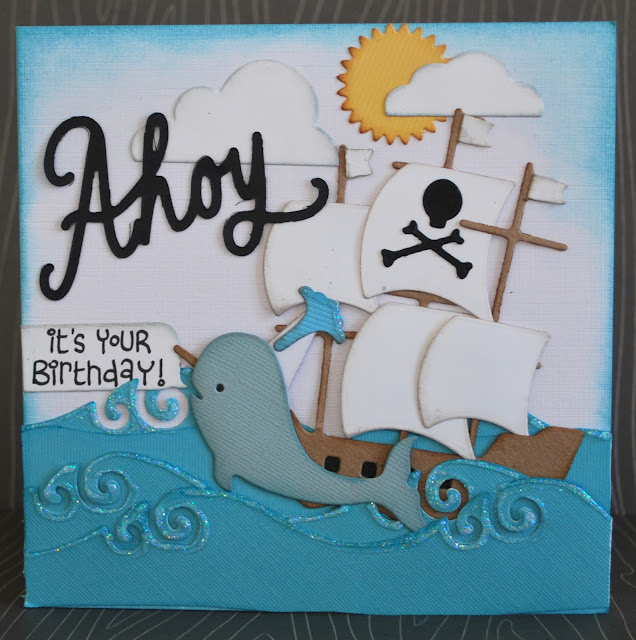 If there seems to be an extra wet look to the Stickles that is because when I first finished the card there weren't any. And the whale didn't have a spout. It was just wrong. So a quick spurt of stickles later and I snapped the card while there was still enough light. The sun is a Memory Box die and clouds are Dienamics. Everything was sponged with Distress Inks of various colours which does help to give dimension. I don't have alphabet stamps small enough to stamp a custom message but don't really like my handwriting on cards. Ah well.

I've also done a layout this week. It is based on one of Shimelle's most excellent  scrapbook starting points - a sketch for two 4x6 photos. My photos are not 4x6 but that is the beauty of scrapbooking - it is adaptable. 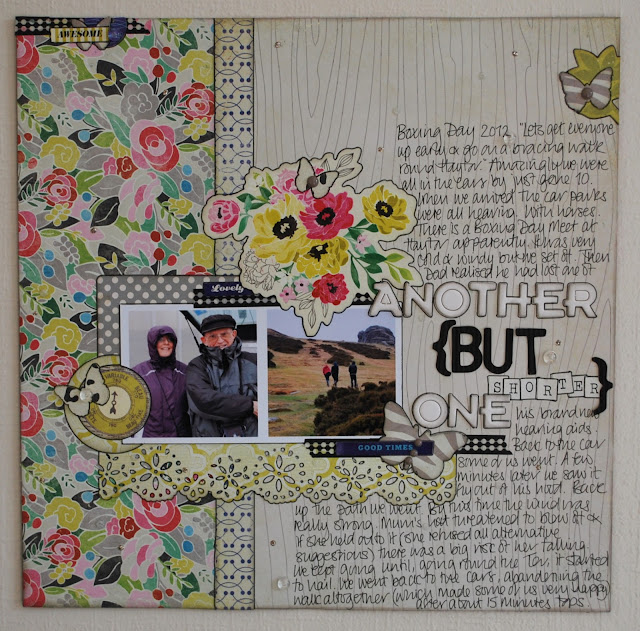 I used the lovely Random papers by Crate Paper with a few other things thrown in - like a grey spotted OA journalling card and a paper compass from a different CP set. But see - there is some purple paper (the thin strip). For some reason it is really hard to find purple scrapping paper. Wish I had thought of that when I bought my coat (not a fashion purchase but a windproof, waterproof coat that is necessary in Devon and it was this colour or nothing. Phil has bought a similar coat more recently in a bright red which I much prefer). There is also some washi tape; MME enamel dots and some dewdrops (the clear raised things) that I found on my still fruitless search for the little wooden stars I have put somewhere.

After I had started sticking down the first word of the title (using BG chipboard letters) I realised that I had made a layout within the last 4 months about a family walk that also started with "another". Fortunately they won't be in the same album as I have just finished one. Still a bit annoying though. But then we do have a lot of adventures on family walks (and many photos of the back of my kids!)
Phil photoshopped a photo of the day to demonstrate my mum's poor choice of headgear and how windy it was. I thought it was too mean to put that on a page. But will still show it here! 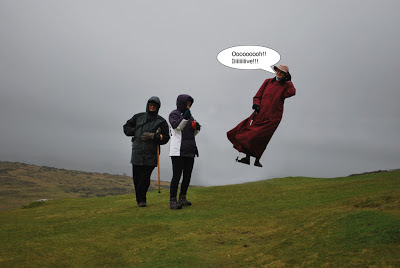 Your card is wonderful Lythan - the stickles really give it dimension and that little whale is really sweet. I wish I had handwriting like yours, it always looks so good :)

Beautiful layout.....but for me the story was very funny and sweet.

I love your last pix too. LOL!

Fantastic projects Lythan, your whale definitely looks happier with its full complement of a spout and stickles!

And that photo with your mum really made me laugh! Poor woman.... hehe

Your card is great, Lythan. The distressed borders are very nice. And the sentiment is so cute!

This layout is beautiful!! The black around all the edges really makes the colors pop out. love it