Did you hear me?

My voice was on the telly this week!
If you watched the Hotel on Channel 4 last Sunday where they featured a wedding reception, then you would have heard a snippet of my voice as I did the ceremony at Furrough Cross Church (they obviously decided that was a better picture to have on the screen than my ugly mug)
My confession is... that I can't bring myself to look or listen to it, even though it will be on 4oD.
I'm happy to send autographed photos as long as you send an sae....

In other news - we are in the middle of exam week here. I think it is really unfair that Carys has proper AS exams already. Although I suppose having unit sized exams is easier than all in one go like in the olden days of A levels when I were a lad. She has one more after today on Monday and then we will celebrate by watching Les Mis.  She and her friends do "Suit Up Friday" so she has gone to college in her new smart jacket today! Later I will pick her up so we can both go to Messy Church. I spent last night prepping and had to cut things out of funky foam. I am now so over funky foam. Depending on the thickness I could only put two or three layers of foam through the cuttlebug at once - although I was able to cut two different sized circles at the same time. I needed 150 circles. (Its a rather lovely noughts and crosses board with pipe cleaners and punched circles and everything), Still we watched an episode of Buffy while I did my upper arm exercises (aka diecutting). We are 7 episodes in and loving it although Carys is not keen on Angel - which leads to much hilarity (don't kiss him - put a stake through his heart). I suspect she will be a Spike girl like me. Which is weird imo.

I did manage to squeak in a little time for card making yesterday and so actually got my card onto the Daring Cardmakers blog on time this week! Leo came up with a lovely dare - the Frill of It, which made us come over all Jane Austen with frills peeking out from everywhere! 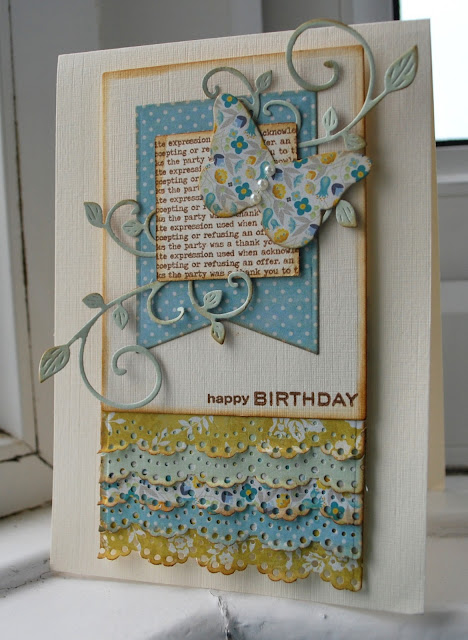 I think this photograph is truer to the colours than the one on the blog. Its a tough time of year for photos! I wanted to add a cascade of frills to the bottom but saved that for last. First I chose some matching papers from a MME pad, with the addition of the soft green from Echo Park. I used Craft Creations cardstock for the base, the stamped tile and the raised bit. I used a new Clearly Besotted Building Block stamp for the tile. I used their butterfly die but cut off some bits of it. Other dies: Cheery Lynn; MFT Dienamics and Nestabilities. I think the other stamps are Paula Pascual. The border punch is Martha Stewart. I punched longer strips so that I could line them up properly.  The middle section is raised on foam pads and as I also added some stick on pearls, this will probably have to be a hand delivered card!

I made two more cards earlier in the week 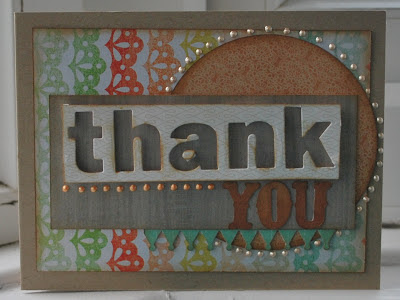 This one uses the blank left by the letters I die cut for last weeks DCM card. I added papers from an old Quirky Kits kit (the last of the leftovers!) and some toning liquid pearls. The alphabets are Dienamics and Tim Holtz. The punch is Jenni Bowlin for Fiskars. 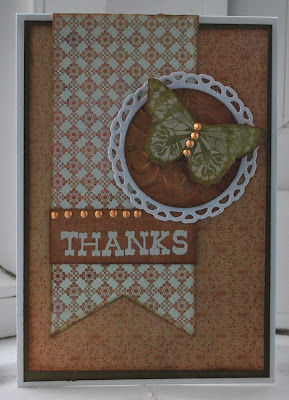 this one uses a MME pad (see the white circle - that is cut from the pad cover!); Dienamics and Nestabilities dies; Cuttlebug embossing folder; Liquid pearls; Banana Frog stamps and white embossing powder. The butterfly is hand cut from one of the papers in the pad.
I've got another packed few days with service preparation; Messy Church; recovering from Messy Church; singing with Phil and Carys at a church event; preparing for Wednesday service on Sunday as I won't have time during the week. If the weather is nice Phil and I are going out on Monday. The plan is to go out every other Monday. This is it. Even if it rains we will probably go to Trago Mills - to buy waterproof clothing and look at the craft department. Hopefully there will be time for playing with paper as well. Have a good weekend whatever you are doing

Well done on your moment of fame! :)

All these cards are really lovely, but I especially like the thank you card with the aqua bunting. :D

And your liquid pearls look so neat! How did you manage that? I can never get them to look so uniform.

Noooo I didn't hear you Lyth - sorry..... ;)
I think your DCM card is simply stunning - colours, design, all the gorgeous elements - everything! Love the other cards too. fingers crossed for Carys...

I REALLY love your DCM card this week, so many clever little details and the colour combo is gorgeous.

You seem to be a very busy and now a very famous minister =)
Good that you still find some time for crafting. Your cards are beautiful. It's a lovely idea to create frill out of punched paper.

Your cards look amazing, Lythan! I LOVE each one of them, especially the top butterfly card with all the frilly layers. I've pinned it, actually, to make something similar later. Of course, I'll refer back to your blog LOL Your thank you cards look so pretty - love the colors and techniques you've used.