But I'm still bone weary. Fortunately because I am a bear of little brain I tend to forget how pants January is. Until it comes round and hits me in the face again. Still not so much of it left now. Ah, but then its February. Hmmmm I probably shouldn't move to Scandinavia with that attitude.

Although I love their tv shows. Borgen is on now which is like the West Wing but proper European. I am so proud that I can now tell the difference between a Swedish and a Danish accent. Every now and then I think that I can suddenly speak Danish but then realise that they have switched to English. Effortlessly. And the lead in Borgen has a cracking French accent too. Also it is just as well that I have finished having children as I love all their names. I'm trying to convince Carys to call her children Troels, Pernille, Pilou, Sidse and Soren but she remains unimpressed by my choices. (NB I don't really expect her to have that many children. And I got to choose names for my kids so what ever she chooses will be lovely) (BTW I've just googles and it turns out Pilou is a nickname so that one can leave the list) 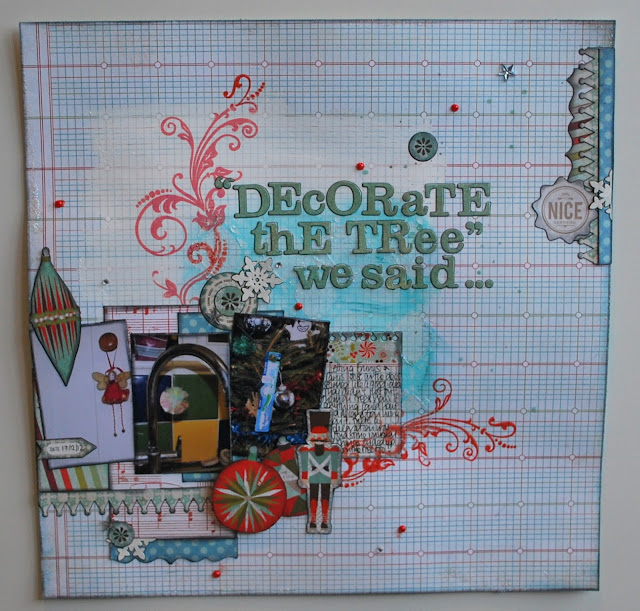 and the camera hated it! Couldn't get a good sharp picture. Maybe the camera was trying to tell me something...
I decided to go for a funky background on patterned paper. I'm beginning to think I should give up on trying painty backgrounds as I am never happy! First I put on some Gesso, then when that was dry I added some glitter texture paste and covered some of that with a light blue paint. I added some artemio stamped swirls in red ink. All the papers are from my Christmas card leftovers so include a lot of Basic Grey and some Fancy Pants. The stickers are all Basic Grey. I enjoyed using all those letter stickers all at once. I think that is all the green "e"s though. I also added some Sarahs Cards red gems and some stars that I bought in Wilkinsons - a huge lot of them for 10p as they were in with the Christmas decorations sale. 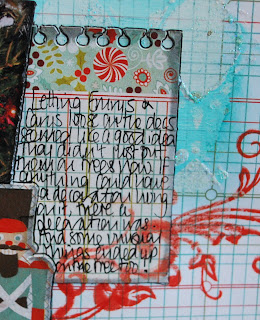 Here's the writing. When it was done I was disappointed that the red swirl was under the journalling block so I stamped another swirl on the top. Its a little smudgy as the sticker is shiny but you wouldn't know it wasn't all one stamp if I hadn't told you would you?

I'm happier with this layout 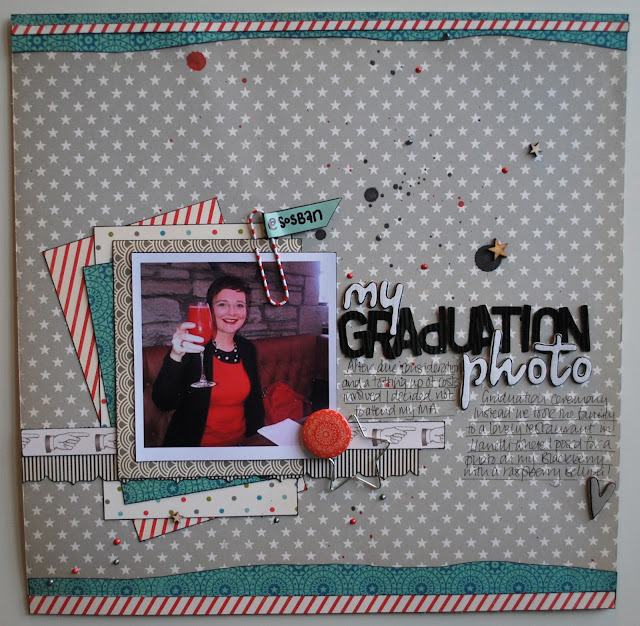 I bought a few sheets of 12x12 Midway by October Afternoon as well as the 8x8 pad so used one of those as the background to this page. I now have some ink droppers that were put to good use with the black and red mists. I randomly chopped papers to layer behind my photo. Because the background paper had got a little dog eared at the edges I decided to add in top and bottom layers (header and footer if you will. I write too many papers). The letters are two sorts of Amy Tangerine thickers. The ones under her brand seem to last for ages, I'm not sure why. Other embellishments are a metal star (I've got loads of these hanging around!); some Basic Grey flair (that is the name for the red thing that looks like a badge but isn't) and a Studio Calico heart. The little stars are Studio Calico too. I have a whole packet of them somewhere but it hasn't been put back where it should be (by me) and I have tidied two drawers and still not found them. Otherwise there would have been more on the page. The other little dots are Liquid Pearls (uh-huh I am addicted to them). Oooh and the paper clip and banner are Smash. I have a Smash journal which I think I am going to use for my trip to Florence later in the year to celebrate our Silver Wedding. (Oh boy, admitting I have been married almost that long makes me feel really, really old). At this rate I won't have any actual Smash elements left! oh dear, I'll just have to buy some more then...

I hope you feel full of sunshine inside even if it is dark and cold and horrible outside!

Fab layouts Lythan, I love the Christmas tree one and all that BG lushness. hehe