Are you sitting comfortably?

because it is Story Telling Sunday.
I knew just what precious thing to pick this time.
It may not look that precious to you though 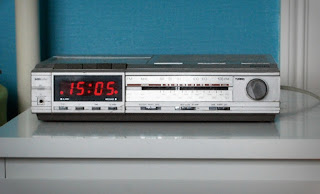 Its a radio alarm clock.
Which was given to me on my 18th birthday on behalf of my most beloved grandfather - known as Pop. It was on his behalf because he had died just over 5 years previously on 28th May 1978, the day after my mother turned 40. I think Mum and Dad chose to give a gift from him because they knew of the close bond that we had and wanted something to mark it. It was lovely to have something to remember him by (although my next "precious" might be something else I have of his too!). There are a few significant things with regards to this radio alarm.

1) Pop and I really loved each other. He was my only grandfather - my dad's parents had both died before I was born. Until I was two we lived in the same road and he did a lot of caring for me. Gramma, his wife was lovely too but more distant in my life - not just because she died when I was 8. Pop chose his grandad name because he wanted it to be something that a baby could say easily and even be the first word. Being a teacher he worked hard to train me and according to mum it worked. I think he was a much better grandfather than father 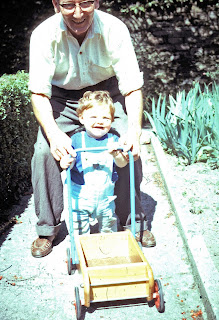 My first memory is of being pushed in a pushchair along the Baglan Road and pointing up at the street lights and saying something about them. In Welsh. I lost my Welsh when we moved to England so it must be before I was two (I did start talking early much to everyone's chagrin delight and my Welsh was on a level with my mother's at the time. Apparently)

Most photos of me and Pop are at my parents house. And there are lots of memories that were not photographed as I used to spend precious holidays with him on my own, or with my brother. But the few I have, he is always looking like this at me. I hope he still does 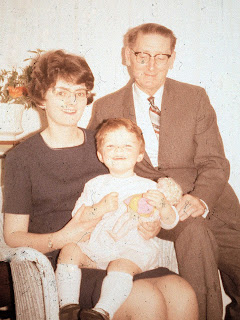 2) The radio still works! I will be 48 next birthday. It is still going strong after almost 30 years. True, the cassette player stopped working but hey, who uses cassettes these days. But I do remember using the radio/cassette combo to create my own playlists

3) A few years ago, off their own bat the children decided to buy Phil a new clock radio as a Father's Day present. I tried to hide my feelings but I suspect my face was a little like Mrs Doyle at getting an instant teamaker 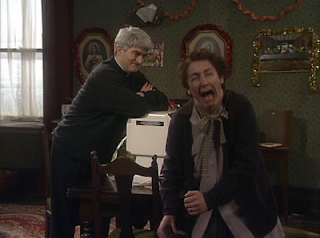 (Best. Father. Ted. Ever)
For a while "my" clock radio was removed. But to be honest, I pined. I felt like my arm had been cut off. It is only a thing. It is only a thing that wasn't even really given to me by the person whose love it somehow encapsulates for me. (And I am always cross with it when it goes off in the morning as I would rather stay asleep) But my lovely husband understood and although it was hard for him not to use his specially chosen and paid for the very first time by his children present, it is mine that we use. I don't know how I will feel when it finally stops working.

(with Pop as bridesmaid to my Uncle David and Auntie Clare)


4) By chance - at least in my eyes, our wedding date was 10 years to the day after Pop died (yes, the day after mum's next milestone birthday) and it has created another memory in which he is still very much part of life, even though it is almost 35 years since he died. How strange though that something as mundane as a clock radio could sustain this bond of love

Bet you never expected all that when you first saw the picture (and yes I might have cried a teeny bit whilst writing all this down!)

Love the way you told this (couldn't stop laughing at the piccie of Mrs. Doyle's face!).....how amazing that one item, that other people wouldn't even blink an eye at can hold so very many precious, and wonderful, memories for you. Thanks for sharing!

A lovely story of a wonderful grandfather. I think it's great that the clock radio brings back such lovely memory & that your hubby understood how important it was to continue using it! Thanks for sharing.

What a lovely story Lythan - in every photo you can see the love in your Pop's eyes when he looks at you.

He sounds fabulous, you are very lucky to have had that bond.

Wow, that radio is something else lasting that long. I hope it lasts for the whole of your life.

This is such a wonderful story - it tells a perfect story of exactly the kind of precious object I had in mind when the whole idea first came to me. I love it.

It speaks to me on so many levels. My Grandma died on my 10th wedding anniversary and even before that happened my favourite picture of the day is one she stars in - she wore the same dress to my wedding that she wore to me Mum's! You've got me started now..lol but thanks for that. Plus, we are celebrating an 18th birthday round here soon and are thinking of suitable "presents to keep".

A lovely story thank you form sharing your precious xx

Such a wonderful story! *hugs*

A lovely story Lythan...had to laugh at the thought of your face when the new alarm was opened!!
Alison xx

Oh I can understand that something given in memory of can be so special. What a lovely relationship you were blessed with.

Oh thanks for sharing all those connections with your grandfather. I wouldn't blame you if you shed a tear or two when the clock stops working.

What a wonderful story about your relationship with your grandfather. I knew both of mine into my twenties, but we were never close. I was close to my grandmothers and do have a few things from them that I cherish. Thanks for the memories your story evoked for me.

Many thanks for sharing your precious story x

Lovely story. I love how something so 'ordinary' is, in fact, 'extraordinary' :-)

We can't choose the things that are precious to us, they just happen. You keep using your radio and thinking of your Pop.

This brought a tear to my eye. It's a lovely story and Pop sounds like an incredible man, his love for you shines out of his eyes x

I loved reading about your bond with your 'Pop' & I'm sure he's still looking at you 'that way with love' right now!! TFS :D

You were very blessed to have that special relationship with your Pop. In a way he still greets you every morning ... even if it is with the sound of an alarm.