How long does it take to make a card?

In this case four days.
FOUR
DAYS
and there is hardly anything left from the first version that went on to the second version.
And even that nearly went into the bin
Sigh.
I think it was performance anxiety as I loved the Dare from Friday so much and wanted to make a most excellent card
and it all went pear shaped.
So, this weeks Daring Card challenge is "colours of the sea"
My fave colours
I love the colours of the sea and not just when it looks as amazing as this sherbert style 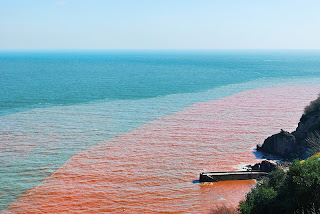 (photo taken of our local beach following a rock fall in May)
Green and teal and turquoise and light blue.
Yummy.
My card - not so. 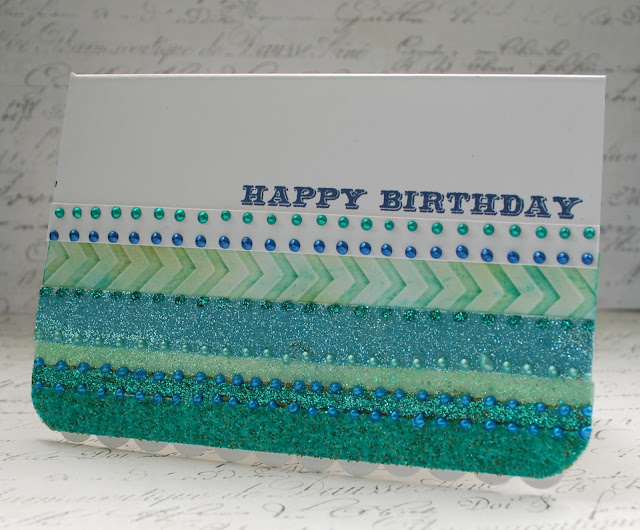 Part of the problem was that some new Distress Glitters arrived that I was desperate to play with. I had the idea of die cutting a Dienamics flower, dry embossing the part left behind, smooching it with the matching distress inks and then replacing the flower - now covered with the glitter.
BUT I had forgotten that on the video I had watched Sir Tim had warned not to try to use the glitter on thin strips. And I discovered that my ever trusty glue pen does not work with these glitters.
I was left with a huge mess.
This version has strips of card and double sided tape. I had begun assembling when I realised that the Peeled Paint glitter - lovely though it is, was now completely the wrong shade (you can just about see it sneaking in through strip 2 from the bottom). In the end I covered it with green Stickles - which did not dry evenly so I added some liquid pearls.
The next strip of ultrafine glitter over double sided tape - no problem. The thicker strip needed several pieces of DST and that all went a bit wrong and some of the Peeled Paint glitter got in there (how? why? dunno) so needed more pearls and stickles
I added a strip using the Peeled Paint and Peacock Feathers distress ink (fine once I had cut it straight. That took three goes)
Just be glad that the sentiment stamped perfectly the first time or there wouldn't be a card even now.

Still I like the layers now it is finished

and we are not going to mention the tiny speck of blue ink that obviously came off my finger on the edge of the card are we? ARE WE? Good.

I'll be back in a calmer frame of mind with some layouts very soon!

It's handmade, it's not supposed to be perfect. :-)
I like your glittery ocean colour card. I do. And I do think it's perfect the way it is.

ha ha, well I think it was worth all that effort and stress! The colours are gorgeous, so rich and scrummy!

Definitely worth the effort and stress! I love this card, the colours, the layers, the whole thing. That photo is amazing - how fab to be on the spot to see something like that