Well, tomorrow I get on a train and begin my "pilgrimage". I'm only going as far as Lindisfarne tomorrow and it isn't that big a deal - get a train at Newton Abbot. Get off train in Berwick upon Tweed. Meet lovely friend who will drive me over to the Island. But even that raises my anxiety levels. And when I realised that Phil could not simply drop me off at the station in good time - well I went into complete panic mode (as that is what travelling does to me). It is ok. He will drop me at his church (which is 5 minutes walk from the station)  3 hours early and it will be fine.
I expect I will be at the station 40 minutes early anyway. Just in case.
I hate feeling like this which is why I put myself through it in a "what doesn't kill you makes you stronger" kind of way. And having to put  my trust and faith in God. And myself. And know that it will be ok and if I just relax I will enjoy myself.

Plus I will be visiting some of the most beautiful places in the world with some of the loveliest people. And I am practicing mindfulness and everything....

Instead let me share some of the scrapping I have done recently
Well maybe just a bit as I have discovered that I haven't blogged much of it at all! 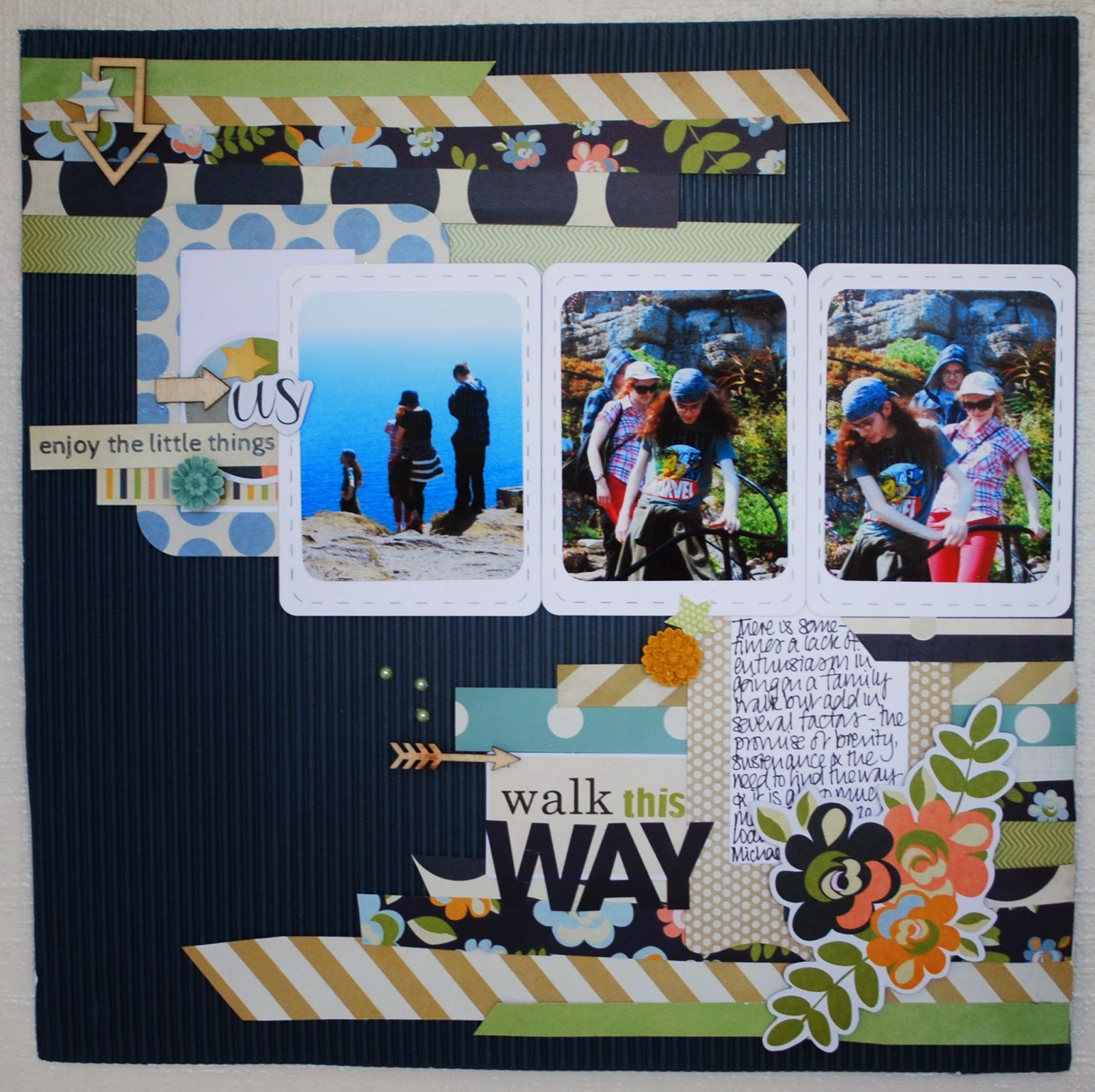 Just in time this is the last layout for our holiday 2013 album.
I was insprired by Glitter Girl's video about filling up frames.
I bought the Fancy Pants "Collecting Moments" kit last year as well as lots of embellishments to match. I have to say that most of the colours in it are fab - blues, greens, orangey gold - all good, but there is a salmony pink that I really dislike. So haven't bought the whole caboodle I haven't used it much.
Hence, I think everything on this page is from that line! (Apart from the wooden arrows)
I trimmed lots of different strips to layer and also used a new frame die.
I have a feeling that I have used this title before but as there was a little card in the embellishmet set with "walk" written on it, I just had to use it again. The journalling is kind of hidden but you could lift up the flowers to read it if you really want to 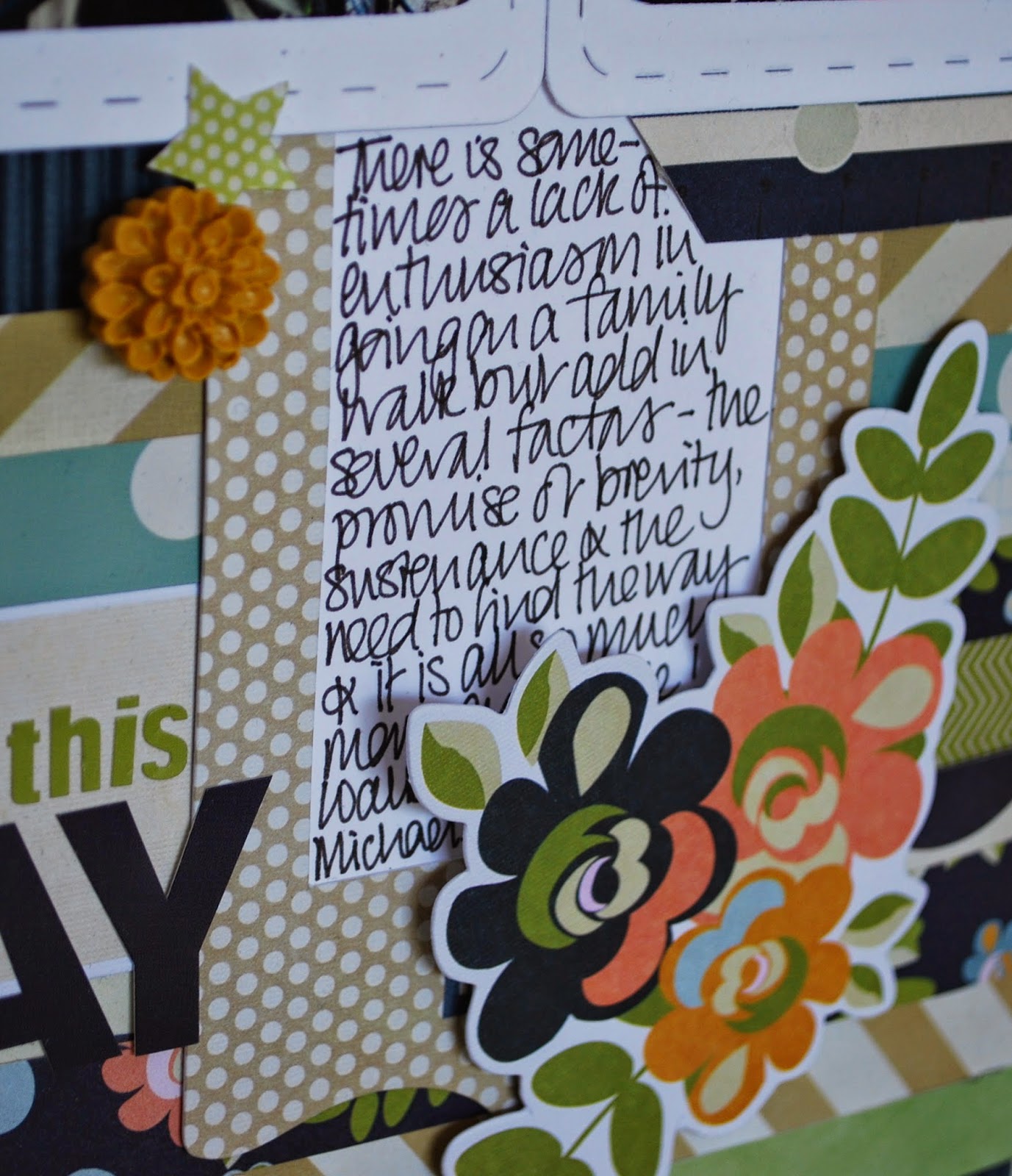 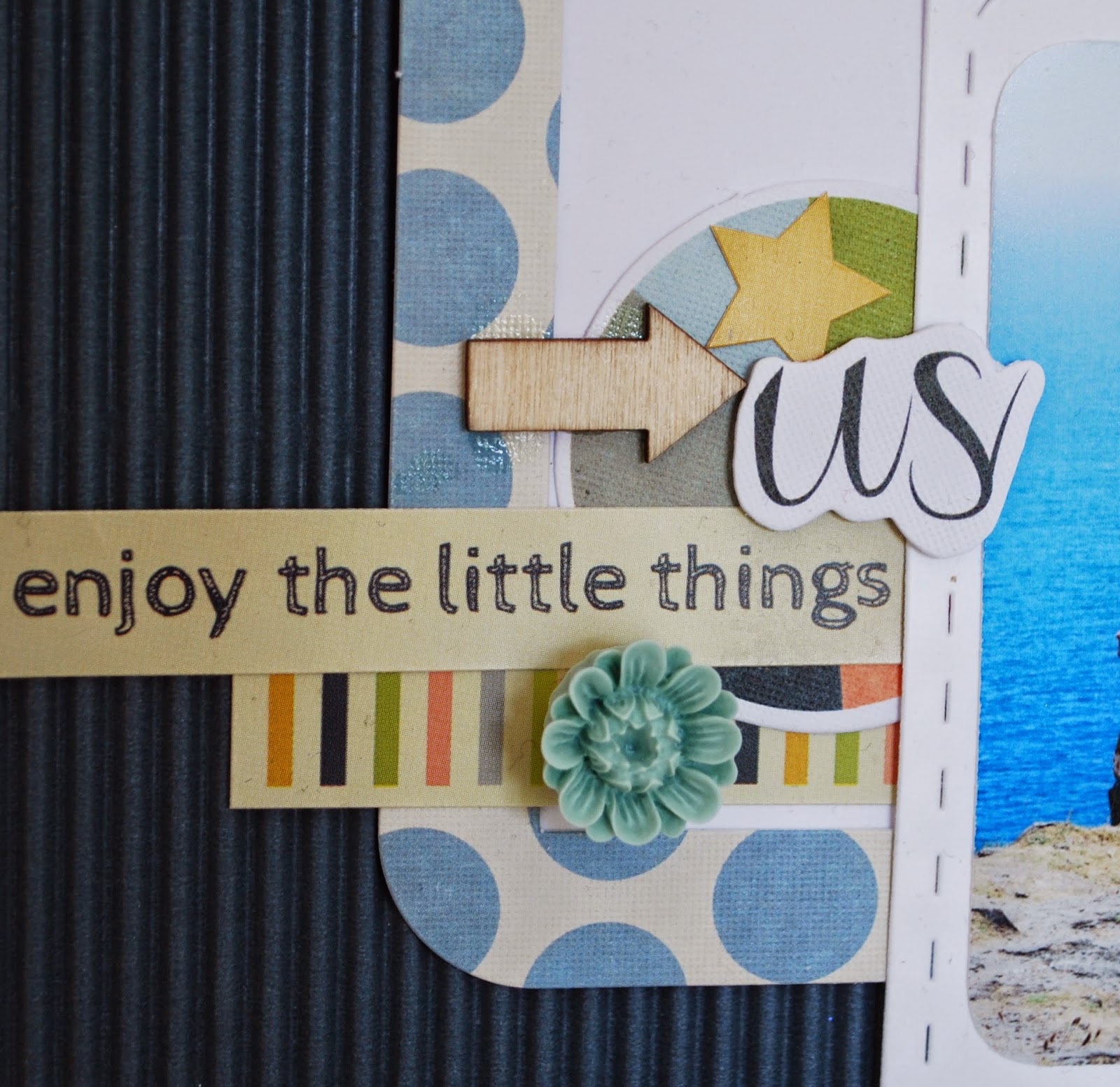 In looking through the layouts to share I have discovered that for some reason I seem to equate my dog with yellow paint.... This was one of those layouts where I just had fun splashing things about!
The papers are a combination of Fancy Pants Wonderful Day and American Crafts Amy Tan Plus One.

The background was made using embossing paste, distress ink and stencils by Balzer Designs.
Lots of black pen and layering and little details 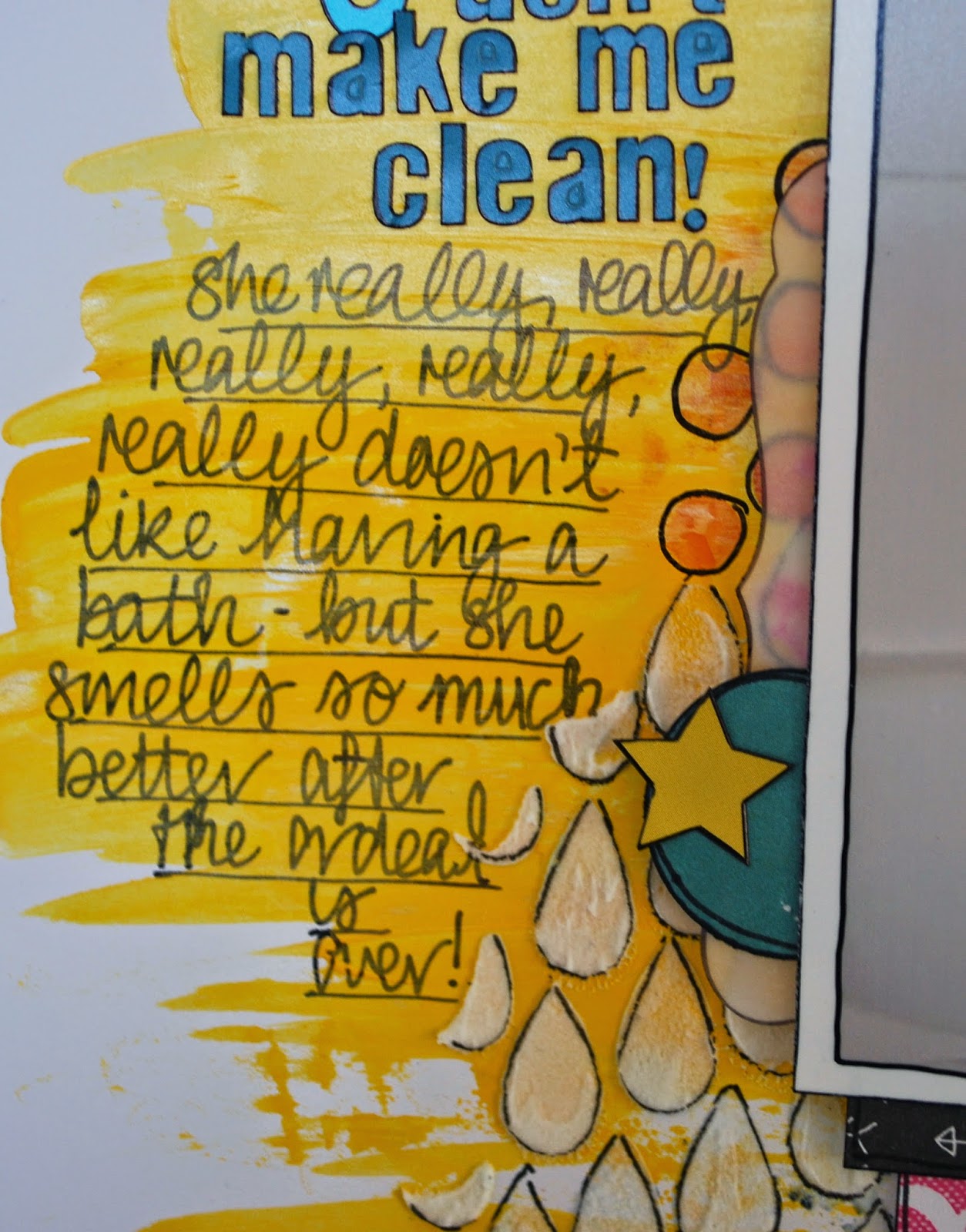 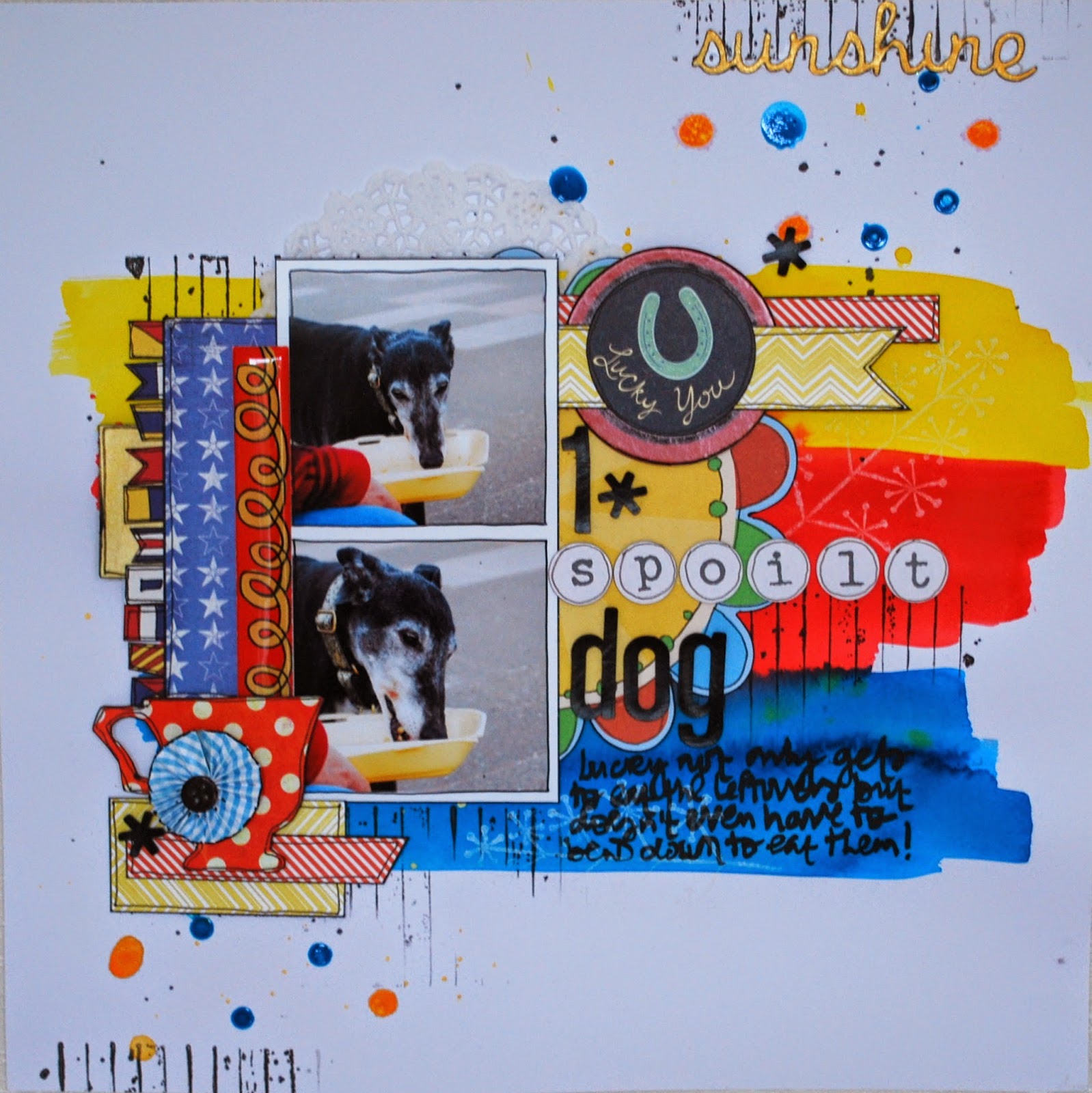 This uses some gorgeous Koh i Noor watercolour dyes. They are extremely vivid as you can tell. I added some stamping in white just to give extra dimension. The papers are Fancy Pants Nautical but there are a few other bits and bobs from stash as well - including a Love Elsie swirly thing 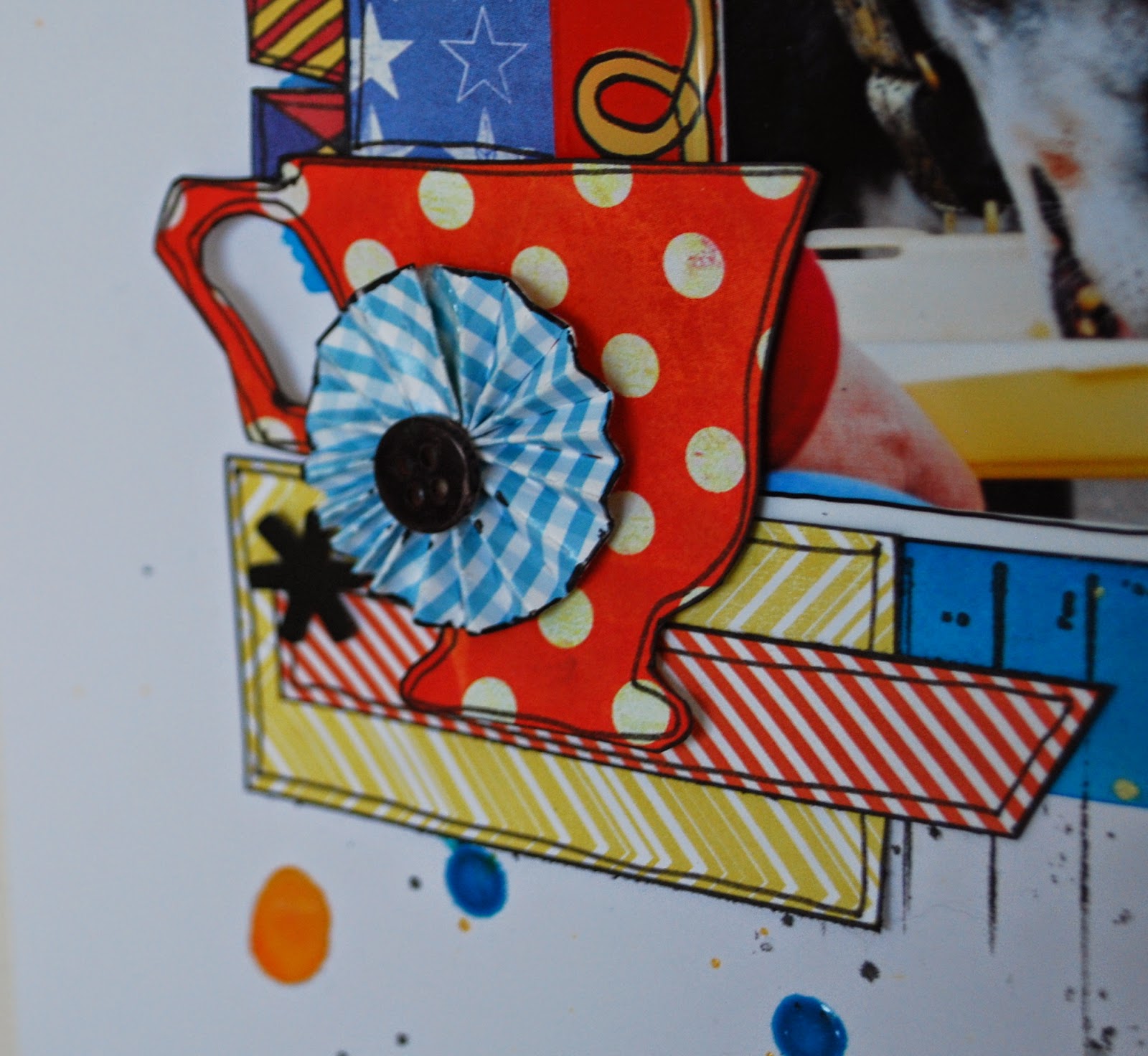 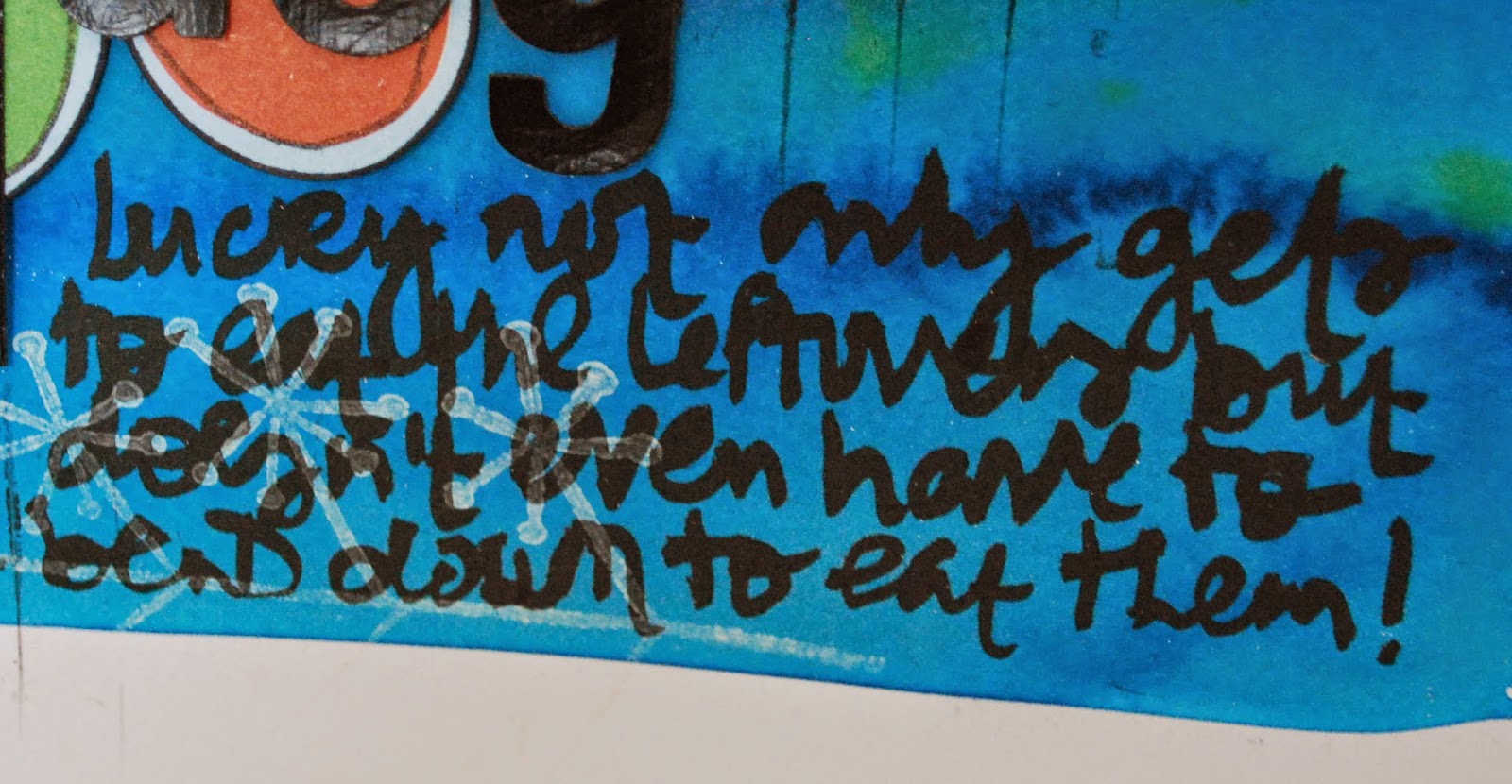 I tried the scripty writing again. Phil still hates it!
Posted by Lythan at 12:24 pm

Hate travelling, so feel for you! But it has to be worth it to see Lindisfarne, that's definitely on my lists of places to visit. Have a lovely and very special trip.
~Kate~

Added to say if headed north I wouldd want to visit Rosslyn too, where are you headed next?
~Kate~