You know I am 25, right?
Most people think I am about 25 and inside I usually feel about 25.
BUT
I now have a son who is 15.
OK, so he too looks younger than his age (but is now taller than me, yippee!)
And truthfully, my body is more like that of a 40 something who has had 3 children all in different and in shape changing ways. (well not out of normal different like out of my nose or anything but as Carys used to tell everyone "H was cut out, E was pulled out and I came out by myself" Yeah, with a little help from your mother, girlie)

15 though, that is like old. That is two years from being able to drive and three from being able to vote old. And if he is old - what does that make me?
But although it is tempting to stay in denial I just love the young man he is growing to be in front of my eyes so if I can accept that he is 15 then I just have to accept that I am 36.
OK, sorry, 42. 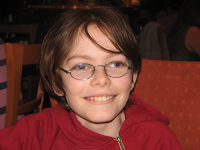 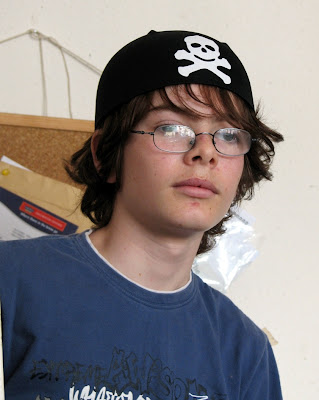 We love to buy presents from Poundland. "It's tradition" as the kids would say. And he has worn the hat most of the day! I just love the way he looks so different. He wants to grow his hair again. I have just hacked his brothers but H actually suits long hair I think. Oh and he liked the card but I have forgotten to photograph it. It is cwute too.

And now for the promised layout - the last one in the Scotland 2006 album. I knew what I was going to do for this ages ago but wanted to make it last especially as it meant I had more of these at my disposal... 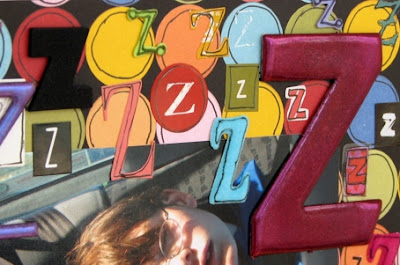 And yes that is one of the Utee letters that caused me so much pain. But it was (almost) worth it. Utee'd chipboard just looks so lush 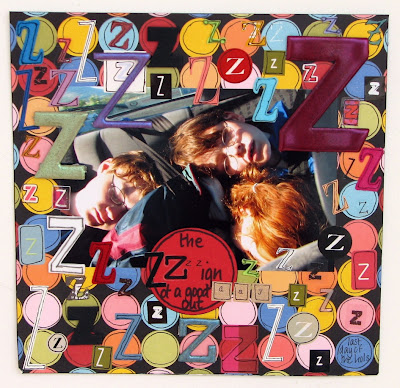 Christina Cole paper, a circle punch, "day" is MM kraft stickers and the rest are from my huge pile of alphabets. Do you know I had loads of "z's" to choose from? I think it is a great way of using up those letters that often feel so lonely at the end of the packet!

Tomorrow (well today as it has just hit midnight) I start back to work. Fun work to begin as I am teaching at Imagine That but it is full metal service preparation in the afternoon and evening. But for tonight, I am still in denial about THAT!
Posted by Lythan at 11:41 pm

Don't they grow up so fast, he is so looking mature these days, scarey stuff huh!
Ive been in denial for years, then I hit 40 & loved it.
Got ill 3 months later & the year has passed by not how i planned. My mojo is in & out the house like a rabbit! Get it all planned on paper but transfer to a card & yuck, bin it goes!!!

lol! I have been 29 for the past few birthdays - can't possibly divulge how many as that would ruin the illusion.... Hope that Hywel had a fabby birthday. fantastic artwork as always :)