when you have been on holiday. And I haven't even started school day timings yet - eek!
It is good though. Although as I have two services this Sunday I have to be disciplined about getting things done. And discipline is one of the spiritual gifts that I need to work on...
I have been hospital visiting amongst other things this morning. We have a lovely bright new hospital with someone playing piano in the atrium. BUT there is no way to get to the wards except by lift unless you are a member of staff. I always take the stairs in the hospital - its the only exercise I get! Still it is nicer than the former workhouse of old. It was lunch time and the person I was visiting had vegetarian. I think I would need food parcels....

I ought to clear up that I didn't do all of the journalling by hand on yesterday's layout! The little words poking out from the waves are printed. The more wobbly writing elsewhere is mine!

Today I set the dare for Daring Card Makers and tried to be clever with a cryptic clue. Lets just say I am not that clever...
A trio of Welsh Barbers means - use 3 die cuts on your card.

IN Wales (apparently) as all the men had the same few first names but also same few last names (thanks to the English imposing last names on us when being known as Tomos ap Rhys, or Tom the son of Rees worked quite well for hundreds of years) - there were lots of men with the same names which could cause mistakes so men were known by the job they did - Jones the milk, Jones the train, Jones the barber etc and Dai is the Welsh shortened version of David OR Davies as in South Wales a lot of boys have nicknames to do with their surnames rather than their first names.
So its... 3 Dai (Die) Cuts.
Ever wish you hadn't started something?

However the results by the team are great! I love seeing all the variety of takes on a dare. I tend to use 3's of things a lot - especially matching ones so I challenged myself to use three different die cuts.
My first card was my normal dare style of white square card though. 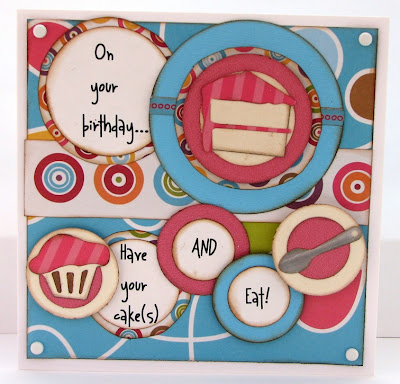 I used the August Self Addressed kit. Yummy! Some of the papers have a sheen as well.
The die cuts are all Quickutz - the two cakes and the spoon. I also used a few circle punches, computer printed sentiment and white brads.

So I agave myself an extra challenge of a non white non square card. This one was from the SA kit too and uses the same papers and ribbons. 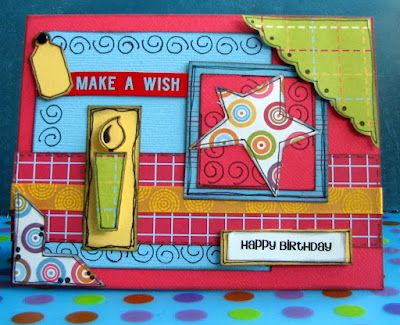 Apart from the yellow card which I have loads of but don't know where from! The star, candle and photo fastener thingy are QK dies. The photo corner is hand cut and the other corner is a punched square with a scallop edge. The swirls were done using the little doodle template from last months SA kit.

And now... back to service prep! Have a lovely weekend.
Posted by Lythan at 1:21 pm

Realy love these 2 cards ,the colours are just fab ,Dawnx

Both of these are fabbylicious indeed - the colours are just so gorgeously bright and happy. All the elements you've used look amazing - every time I look at these I see something new

Great cards, I love both!

Gorgeous colours on both of these cards. They exude happiness.
I reckon I am so burn out at work it is affecting my mojo.

When I saw these, I just thought WOW, they are just so fabby!!!

Fabulous cards Lythan! They are so bright and colourful!

Just spent a good half hour catching up on your blog - always a good read! Your boy is indeed growing up - amazing what a difference 18 months will make! Loving your cards and your layouts as usual. Go you! :)

LOVE both the cards Lythan, they're SO funky!! Love the papers, think I might need this SA kit as the stuff you make with them is always gorgeous :)

Great cards Lythan. The cake one is scrummy.

These are gorgeous Lythan, love how bright and funky they are, fabulous!

I really love your style Lythan, I never seem to be able to get the same results no matter how hard I try, I guess I should stick to my own style and stop trying to replicate other people's. You just inspire me so much!