Something in the water

I'm on two small blog teams - and there seem to be babies popping out everywhere! I sometimes get a pang for another, but then think about sleep deprivation and nappies and the fact we just couldn't plain afford it and a baby can't do hoovering like tweenagers and I decide I would rather wait for Grandchildren!
The first of the imminent babies has arrived - and I think he should have been the last. Joshua White made a surprise early entrance for Kimberly and is in a special care unit at the moment but is doing well. My prayers are with the family - and huge congratulations too!
One of the nice things about being on international teams (ooh hark at her!) is when you realise that we are many peoples divided by one language - or however the saying goes. Someone in the US couldn't understand what I meant by "fortnightly" and on DCM there was puzzlement from Mel when the Brits were talking about "hoovering" as I did above. Apparently they don't have Hoovers there - they have Luxes in NZ so I suppose you do the Luxing there. I won't find out what Mel thinks til tomorrow because today is over for her and she won't write again until I am in bed. It is strange this time thing...

OK this was supposed to be a quick post before I walk the dog, tend sick(ish) boy and do some prep on my Sunday service before taking a funeral.
It is Salt launch day today and Hazel has chosen the theme
'Encouragement'
I love that verse in 1 Thessalonians 5:11: 'Therefore encourage one another and build each other up, just as in fact you are doing.' - in fact, there is so much about encouragement in those letters, and indeed, in other letters from Paul. Encouragement is such a blessing to receive and also to give.
I love the verse that Hazel has highlighted too and wanted to find some photos of the rest of the family to use with it. I found some that I had been saving to scrap about a walk we had a year or so ago. We got so muddy you wouldn't beleive it. The quality of the photos isn't great but the meaning is what counts for me 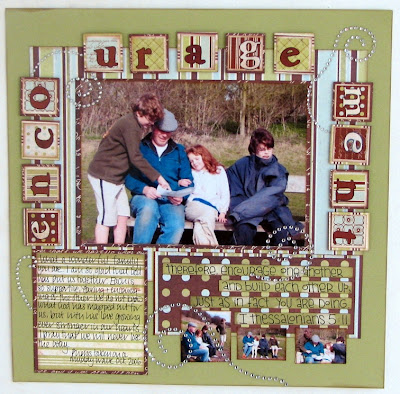 The papers and stickers are all Scenic Route Newport. It is probably obvious that one of these letters is not like the others due to there being only two of each letter in the sticker pack! Then I added some inking and one bling swirl cut into bits. Can't remember the make but Emma sells them in Imagine That and they are GORGEOUS!

Here are the writing bits in close up. The Biblical text was done in my Kim Hughes font alike handwriting. I love writing like that now! 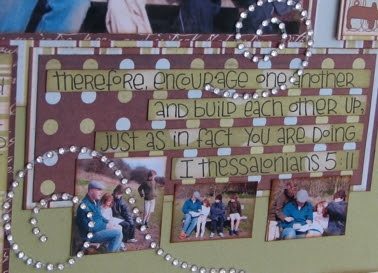 and the other was done in my normal scrawl! 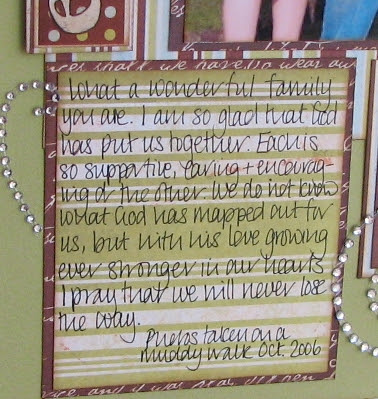 This is gorgeous Lythan, I love the way you've used the bling swirl and the colours go so well with the photo.