We have just finished Movie Night. Tonight's movie - Elektra. The film was ho hum but the entertainment enormous as we all made little comments that made each other laugh. Ah, good times.

I've had a load of good times today as I went to Sue's house to play and picked up a Martha Stewart punch she had snaffled for me in Florida (legally I hasten to add...). You know how people go on about the MS punches? Now I know why. They emboss and everything. So cool! You can't really see the embossing but you can see the punched effect on this card. 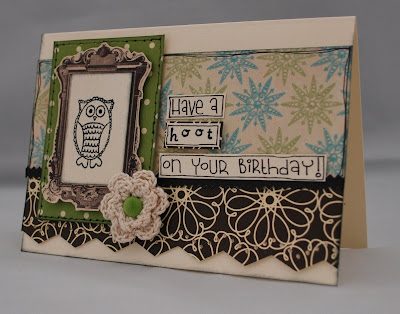 Jury is still out on the card as a whole. Should it read "hope you're birthday is a real hoot"? Does that make more sense?

Anyway I set myself a challenge to use up some of my old Self Addressed kits and took along all the left over 8x8 kits. The 6x6 will be more of a challenge somehow. But I am determined... I know the green spot paper is Scenic Route but I don't remember where the others are from. ON of the papers had these frames on and I wondered how to use them until I realised that just a few were whole ones that I could use as um, frames. the little owl is from Sue's Papermania Secret Garden set. I added a Doodelbug paperfrill and fuzzy brad and a crochet flower that I have had for YEARS.
NB If you decide to punch the bottom of the card you may have to create a new bottom for the card to allow it to stand up. I'm so glad that Sue uses the same card bases as me so I could stop the owl looking tipsy...

I so liked the frame idea I did it again 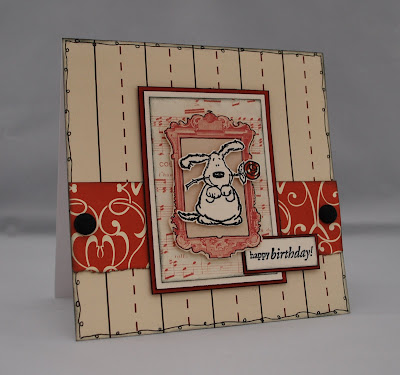 Same set of papers, a tad of Bazzill, Papermania glitter brads, two of Sue's Penny Black stamps (notice the theme emerging? Sue is so great at lending me stuff! And allowing me to keep the foam tape I used as it was better than the little squares I brought with me)

I actually made this card first and it was nearly very quick as well (until I decided to fiddle about with it a little more). It is based on the Sketch This sketch for this week 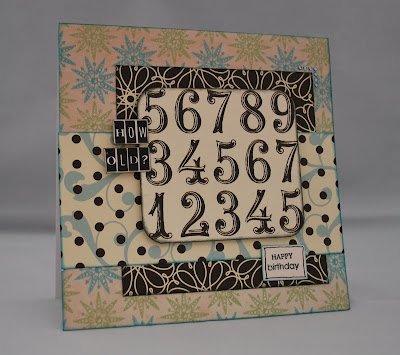 OK it's not totally visible but it was my jumping off point. Same mystery set of papers plus some distress inks and an Imagine That sentiment stamp. I had such fun with Sue, though I am sad to see the water damage :( Hope we can do it again sometime soon...

This is all totally out of chronological order as I actually made this layout yesterday. 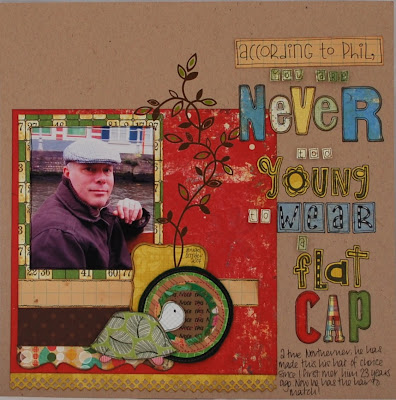 This uses some of the bits from the Crafty Templates Quirky Kit that I have just received. It is so lovely I could almost eat it. (Don't try the paper is rather chewy). The green bingo paper; the squares paper; and the spotty curved paper (actually the bottom of the bingo one!); the tortoise (had to add a new head!) and the gorgeous soft felt sewn circle are all from the kit. I added Daisy D papers and die cut letters plus some Kaisercraft and a teeny bit of Crate Paper too. I used my rubber stamps that look like the Rebekah's Birthday font and some Basic Grey rub ons. I don't think I have ever used so many different companies at once!
Posted by Lythan at 9:25 pm

I love the second card with the dog - it's gorgeous! The frame is great.

FAB LO - he does look cool in his cap

the title is lovely

Beautiful work Lythan. (Although I would've quite liked to see a tipsy owl! LOL)

Thanks for coming to play yesterday Lythan, it was fun as always.

I love the cards you made while you were here and I only hope that I can make my little dog and owl stamps look half as good as you have on your cards.

Your LO is fantastic too ……Phil looks so ‘fetching’ in his flat cap!

Looking forward to our next get together……whenever that may be.

Fab LO - really like the leaves and the tortoise. i love the look of those quirky kits - I've been eying them up for some time. Cards are all great - top one is my fave with the crochet flower. Sentiment doesnt matter as long as you have the word 'hoot' in there somewhere!

Love all the cards and the LO is awesome! Your style is just FAB! x

Super LO of Phil in his cap (can't get John to wear any form of hat). Glad movie night was a laugh - good family time. The cards are super - think I need to investigate these MS punches that everyone is raving about - and that frame is lovely. Glad you had a good day with Sue x

what a fun lo! Great stuff.

I do like those frames!! Just makes it all right!